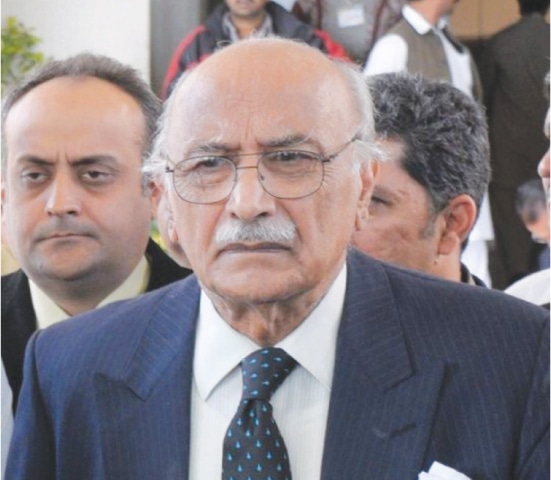 Air Marshal retired Asghar Khan passed away on Friday in Islamabad at the age of 96 after a long illness. His funeral will be offered on Saturday in Abbottabad. He was the first native and youngest ever commander in chief of Pakistan Air Force (PAF). A solider, a politician, a historian and a peace activist, the former air marshal did it all in his long and illustrious career.  Khan is credited with modernizing the Pakistani Air Force and making it one of the best in the world.

He was born in Jammu and Kashmir in 1921. Initially commissioned in the Indian Air Force, Khan fought in World War II, directing and commanding operations against Imperial Japan. After independence in 1947, he moved to the newly created Pakistan. He was appointed as the first commandant of Pakistan Air Force Academy in Risalpur. In 1957, Prime Minister Hussain Suharwardy approved the appointment of Asghar Khan as the commander-in-chief of the Pakistan Air Force (PAF). He was 36 at the time of appointment, making him the youngest air chief ever in the history of Pakistan.

“Air Marshal Asghar Khan headed the PAF diligently and with courage. With his leadership capabilities, he played a vital role in transforming the PAF into a modern air force”

The retired Air Marshal is credited with modernization and expansion of air force facilities and equipment, as well as acquiring latest fighter jets from the USA. He resigned from the Air Force in 1965 and joined the Ministry of Defence (MoD), and was appointed president of Pakistan International Airlines (PIA). During his tenure, he introduced new uniforms for stewards and air hostesses. PIA had the lowest aircraft accidents and highest net profit, making it the most competitive airline of the world. His tenure is considered as the ‘golden age’ of PIA. He retired from PIA in 1968 to start his career as a politician.

In 1970, Asghar Khan started the ‘Tehreek-i-Istiqlal’, a centrist secular party and contested in the 1970 general elections, but failed to secure any seats. He raised his voice for the resolution of the political turmoil in Pakistan. During Bhutto’s rule, he played a major rule in opposition. Khan allied his party with the Pakistan National Alliance (PNA) against Bhutto and was imprisoned for it. After Bhutto’s era, Asghar Khan became active again in opposition to General Zia Ul Haq, he was imprisoned again and he remained under house arrest for more than five years. He was named ‘a prisoner of conscience’ by Amnesty International.

Initially commissioned in the Indian Air Force, Khan fought in World War II, directing and commanding operations against Imperial Japan. After independence in 1947, he moved to the newly created Pakistan

Facing a defeat in the 1990’s parliamentary elections, Asghar Khan retired from active politics. In December 2011, Khan offered his full support to Pakistan Tehreek-e-Insaf (PTI) and resigned as the president of his party. Contrary to popular belief, he never officially joined the PTI. In 1996, Asghar Khan filed a human right petition case in the Supreme Court of Pakistan, accusing Inter-Services Intelligence (ISI) of doling out money to a group of politicians. 16 years later, Chief Justice Iftikhar Chaudhry ruled in favour of the petition but directed the government to take responsible action against the culprits. In 2017, PTI filed a petition in the Supreme Court for the implementation of that decision.

Condolences on his death were offered from all sections of the society. Chief of the Army Staff paid tribute to his services in a message posted on official ISPR twitter account.

Saddened to learn of Air Chief Marshal Asghar Khan’s death early this morning. He transformed the PAF and was a man of steadfast principles and integrity. My prayers and condolences go to his family.

COAS expresses his grief on sad demise of ex Air Chief, Air Marshal Asghar Khan, Retired. An iconic soldier who will be remembered for his historic contributions for laying foundations of a strong Pakistan Air Force. May Allah bless his soul-Amen.