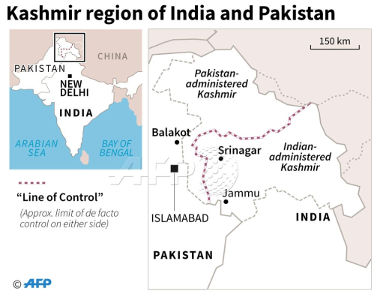 Unprovoked firing on the LOC and the working boundaries between India and Pakistan, continuously for weeks if not months, is now the new norm in South Asia. Both sides blame each other. On Indian side the Modi government explanation to the public is that it is done to stop infiltration from across the LOC. It is also seen by Indian public, as tough response from a strong government. On Pakistani side totally different analysis exists.

On Indian side the Modi government explanation to the public is that it is done to stop infiltration from across the LOC. It is also seen by Indian public, as tough response from a strong government. On Pakistani side totally different analysis exists.

Pakistani government sources, politicians and media have come to understand that Modi government retches up tensions on Indo-Pakistani borders for several reasons: to divert attention from domestic challenges like the civil unrest in Kashmir after Burhan Wani’s death; to appear muscular to Indian voters before state elections as it happened in 2014 or to influence political developments inside Pakistan.

The last one is a latest and interesting twist in a troubled legacy. Pakistanis have noted with concern that India continued robust firing on LOC and working boundary till the new army appointments in November  2016. Guns fell silent immediately after the retirement of Gen. Raheel Sharif and change of his team on Nov 26.

According to the Inter-Services Public Relations (ISPR), Indian troops, on Monday morning, started unprovoked firing in Zafarwal, near the Working Boundary near Sialkot, violating the ceasefire agreement. The Punjab Rangers responded to this firing and then the matter was raised with the local Indian BSF commander and a protest lodged over the firing, the Pakistani side has also demanded an investigation.

Read more: Pakistan and the Strategic Chessboard in 2017

Pakistan has come to realise that this will be an ongoing process, as a new norm under the Modi government, whenever state elections take place in India.

Unprovoked firing by Indians has been happening now for the past several months; once started these can continue for weeks onwards. Pakistani government analysts say there are a number of factors that are behind it. And Pakistan has come to realise that this will be an ongoing process, as a new norm under the Modi government, whenever state elections take place in India or whenever Modi government needs to divert attention from its domestic politics.

In 2014 also, after the Modi government election win in India, and its celebration by all countries including Pakistan in the form of PM Nawaz Sharif joining in the inauguration that looked like a regional Maharaja’s coronation, tensions suddenly rose between the two countries. Pakistani analysts narrate that continuous unprovoked firing started from the Indian side on the working boundaries and the LOC. This continued until the end of the state elections process in 2015. These analysts argue that Pakistan is becoming more and more of an issue in Indian elections; politicians of all sides – especially BJP – conduct election sloganeering against Pakistan and try to out wit the other side – Congress and regional parties – to appease right-wing Hindu voters.

On this Sunday, during an election rally in Haridwar, Rajnath Singh, the Indian Home Minister, said that a referendum must be conducted in Pakistan to check whether its citizens wanted to remain there or wanted to merge with India.

During an election rally in Haridwar, Rajnath Singh, the Indian Home Minister, said that a referendum must be conducted in Pakistan to check whether its citizens wanted to remain there or wanted to merge with India.

This kind of rhetoric is precisely what Pakistani analysts rely upon explaining the Indian political dynamics. Just this week, Ahsan Iqbal, Pakistan’s federal minister for Planning and Development, and the overseer of CPEC, stated in his interview with Voice of America (VOA) that by March the state elections would be over in India and then there would be a better environment to pursue peace talks. He was asked about any possible rapprochement between India and Pakistan.

Ahsen Iqbal went on to explain the difference between India and Pakistan. He compared the internal political dynamics of both countries and asserted that Pakistani politics has since long moved away from being India centric. India is not an issue in Pakistani elections.

“In our elections India is not an issue, nobody speaks about India, nobody does any India-bashing, but somehow we feel that the electoral dynamics in India are still quite sensitive to Pakistan-bashing. So whenever you have an electoral process in India, the government takes a certain hawkish position towards Pakistan,”

The firing also began last year after Burhan Wani was killed in Kashmir in July and the Modi government faced huge criticism from its domestic media and humanitarian groups as well as international media over the actions of its soldiers in Kashmir. The Uri attacks – blamed by India on Pakistan but considered “false flag by Pakistanis – and the subsequent claim of Surgical strikes by the Indian government moved the domestic agenda back from “Kashmir needing solution” to “Pakistan the terror state”

Pakistan is an issue for Indian elections, in which politicians conduct election sloganeering against it to appease right-wing Hindu voters.

Then came rounds of Indian unprovoked firing last November, when the Pakistani government was in the throes of choosing its next army chief, that unexpectedly stopped after the new Chief was chosen. This brought up many discussions in Pakistani TV chat shows about whether India was doing this to influence domestic Pakistani politics.

Analysts in Islamabad claim that the current round of firing may also continue for a while as it has another underlying motive by the Modi government: to present and maintain Pakistan as a trouble spot for the new Trump administration. They believe that it’s Modi government’s strategic need to maintain a negative focus on Pakistan while Trump administration, still in its formation phase, develops its world view. In light of this, the Pakistani government has also come under criticism for falling into the Indian agenda in its recent move against Jammat-ut-Dawah’s leader, Hafiz Saeed.

Pakistan’s Arrest of Hafiz Saeed: Was it a wise move at this stage? Global Village Space