Earlier today, The Oil & Gas Development Company Ltd (OGDCL) posted an official statement debunking recent claims regarding the discovery of Shale hydrocarbons by the media. It stated that OGDCL has neither drilled Shale not shared any information on the matter, so any news in the media claiming otherwise should be considered untrue. 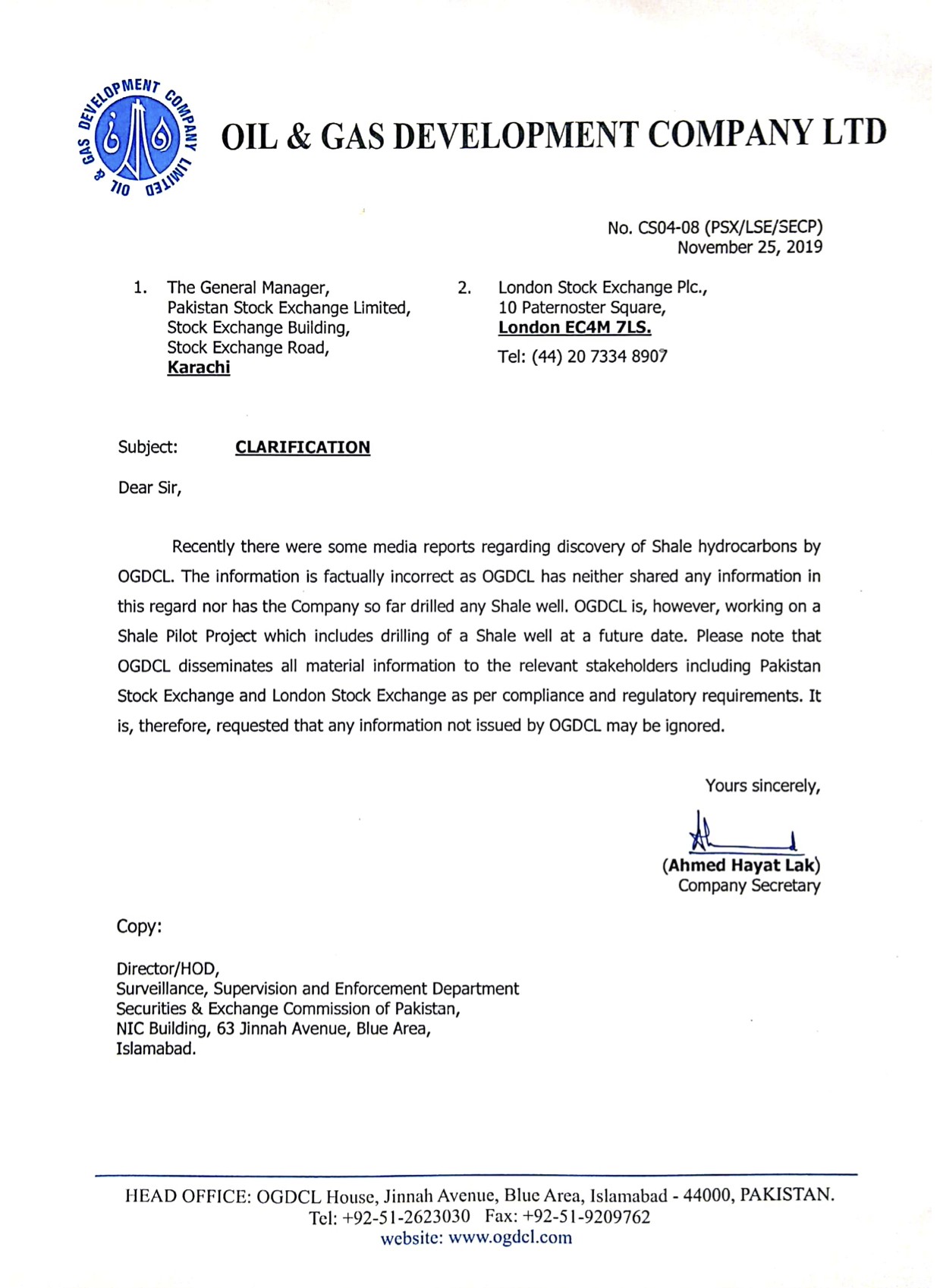 In October, an official from OGDCL said that the company has started working on enhanced recovery of reserves of unconventional tight gas and shale gas. Pakistan is also drafting its first shale gas policy and it may be finished in this year, with a licensing round in the first half of 2020.

Sources in Petroleum Division said the government is in process of finalizing a policy to exploit massive shale gas reserves identified after a study completed in collaboration with the USAID, covering lower and middle Indus Basin.

Sabir Shakir, a TV anchor journalist and columnist, made headlines on Saturday by saying Pakistan’s energy crisis that has cost the country tremendous amounts of money is coming to an end as Pakistan will begin drilling the newfound Shale gas that would meet the country’s needs for the next 200 years.

Ironically, Shakir began his video report on the matter praising the legitimacy of his news. On Sunday 24th November, reports were released claiming OGDCL has discovered new oil and gas in Sindh during the exploration of shale gas tight oil deposits in the region.

Their sources claimed OGDCL found 95 trillion cubic feet (TCF) of shale gas and 14 billion stock tank barrel (BSTB) tight oil reserves that were enough to meet the country’s requirement for the next 90 years, and the company would begin exploration next month.

On a similar note, The Hydrocarbon Exploration Licensing Policy (HELP), a vital document about way forward to self-sufficiency in oil and gas sector authored by an eminent energy expert Engineer Arshad H Abbasi associated with SDPI has pinpointed that Pakistan authorities have so far ignored the area bordering with India, Rajasthan for exploration and production (E&P) activities for oil and gas deposits knowing the fact that India in its side of border is currently producing 1,75000 barrels per day (BPD).

It also raises the red flag asking as to why Pakistan companies are not active for E&P activities in this area since long and if Pakistan’s oil and gas reserves going to the Indian side.

The Oil & Gas Development Company Ltd (OGDCL) posted an official statement debunking recent claims regarding the discovery of Shale hydrocarbons by the media.

The PTI government is inheriting an economy mired in multi-pronged crises. One of the fundamental causes of the economic crisis is energy imports. This dependence on energy import has crippled Pakistan. Meeting almost 85 percent of the energy demand through imports weighs heavily on Pakistan’s trade and current account deficit.

News Desk - 20 October 2021
Zameen.com has broadened its horizons with the laying of the foundation stone of the Edge Mall in Faisalabad. Faisalabad’s property market is essential to the country’s real estate industry.

Alarm for US: North Korea tests NEW type of missile

Constitutionalism: The only remedy for an undemocratic Pakistan?

Foes sabotaging cricket revival in Pakistan but we will not bow down!