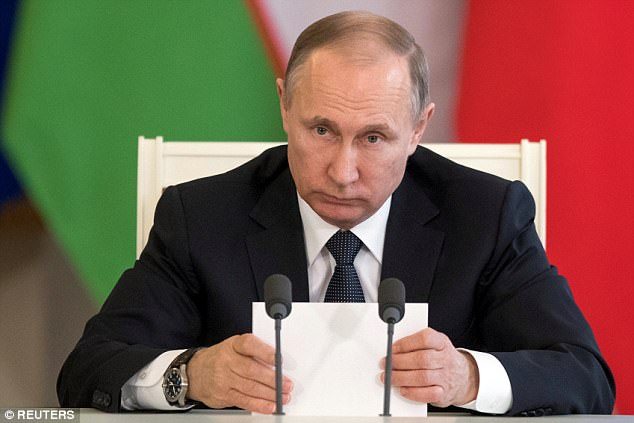 The remarks by US Secretary of State Rex Tillerson on Russia, while speaking at the Woodrow Wilson Centre in Washington, DC on Tuesday, must be the harshest ever he made in office. Some excerpts are in order:

Interestingly, Tillerson insisted in his speech on Tuesday on “implementing a political solution that leaves no room for the Assad regime or his family in Syria’s government.”

What explains the outburst? A combination of circumstances could explain it. One, in the civil war conditions in Washington, Tillerson finds its expedient to take a hard line on Russia. David Ignatius wrote last week in Washington Post in a biting piece that if Trump has not fired Tillerson yet, that’s because of Tillerson’s “one secret survival weapon” – his alignment with Secretary of Defence James Mattis “through all the palace intrigue.” In Ignatius’ estimation, “Trump may not be a soul mate of his secretary of state, but he’s not going to pick a fight with Mattis.”

Of course, Pentagon feels humiliated that it lost the war in Syria to Russia. What must be rankling even more is that Trump personally is inclined to still work with President Vladimir Putin to negotiate a Syrian settlement. Whereas, Mattis has spoken about an open-ended US presence in Syria, where Pentagon has set up 13 military bases. Michael Carpenter, former director for Russia at the NSC in the Obama administration, reflected the mood of the Washington establishment in an opinion piece in The Hill today entitled The United States cannot allow Russia to take the lead in Syria(here).

In the rush to unearth and expunge nefarious Russian influence in our country, Americans have embraced a logic of conspiracy theories and strictly zero-sum thinking that is, if anything, familiar to Russians from decades of Soviet and post-Soviet life.

Then, Tillerson’s upcoming European tour next week must be factored in. The fact of the matter is that the trans-Atlantic ties are in drift, buffeted by mounting disputes. Europe and the Trump administration have sharply divergent approaches on several major issues – climate change, free trade, Iran nuclear deal, defence spending, etc.

The leitmotif of Tillerson’s speech was the “highest importance” that the Trump administration places on the US’ security alliance with Europe. But the fundamental dilemma remains. Simply put, NATO needs an enemy to focus on; the raison d’etre of the alliance depends on it. Thus, a resurrection of the ‘Russian threat’ becomes necessary. Fortuitously, such a narrative is also in sync with the national mood in the US where Cold War-style paranoia about the Russian bogeyman has bred a zero-sum, ‘us versus them’ view on anything and everything under the sun. Matthew Rojansky, Director of the Kennan Institute at the Woodrow Wilson Centre and an old ‘Russia hand’, wrote this week:

Read more: What should India expect from Tillerson?

Tillerson’s speech suggests that it may be too premature to assess that Trump is going to be the last word on the US’ foreign policies. Interestingly, Tillerson insisted in his speech on Tuesday on “implementing a political solution that leaves no room for the Assad regime or his family in Syria’s government.” This is hardly 17 days after Trump affirmed in his joint statement with President Putin (Danang, November 11) that the way forward in Syria lies in “constitutional reform and free and fair elections under UN supervision, held to the highest international standards of transparency, with all Syrians, including members of the diaspora, eligible to participate.” Tillerson’s speech is here.

Why I voted for Trump and why I will do that again?