Rich and poor united in desperate quest for water in Venezuela 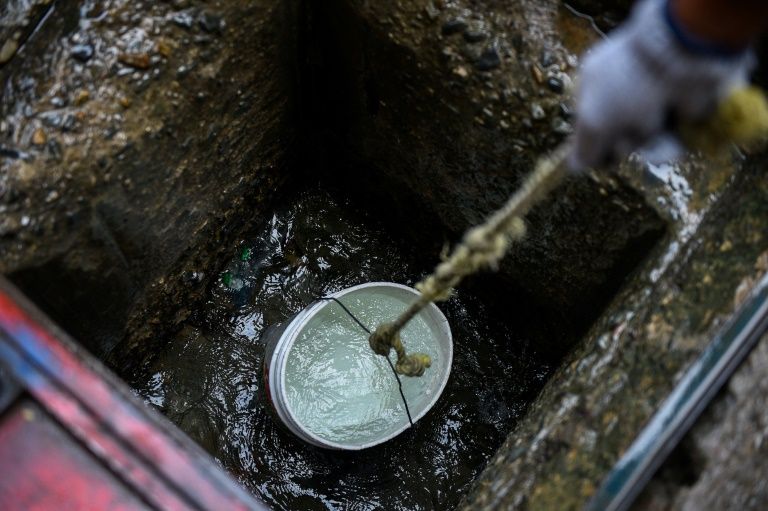 Crippling power blackouts are subjecting Venezuelans to the second phase of deprivation — massive water shortages that make no distinction in income or social class, forcing rich and poor alike to wait in long lines for drinking water, while some hoist it from sewers to be able to flush their toilets.

On the hill in the Caracas neighbourhood of Petare — the country’s largest slum home to more than half a million people — hundreds of people line up day and night behind two wells. They carry anything that can hold water — drums, cans, bottles, buckets. When their turn comes, they take as much as they can.

A little further on, in the district of El Valle, a crowd formed around a manhole, drawing up water for their toilets.

The water is not drinkable, but it will allow them some dignity, to bathe or wash clothes. For the past month, repeated massive blackouts have plunged the country into darkness and disarray. As a result, electric water pumps have shut down, forcing a cut in water supplies.

“We have no water, no electricity, the power cuts are terrible. Food is going bad,” says 78-year-old Ernestine Velasco as she recites a litany of deprivation in her modest house, located on an unpaved street in the March 24 district.

“We are having a bad time. There is no transport, there’s nothing.” Lack of water is a chronic problem in this teeming corner of Caracas. Though the cost is minimal, the service is non-existent, Velasco says. “Thank God, we have this,” she adds, pointing to the two wells nearby, though “it’s chaos, it makes you want to run away.”

Locals are waiting for the state water company to restore supplies. Even then, they expect it will only be for a few hours. “We are dry. We don’t have a single drop,” said Carmen Moncada, tipping over an empty drum.

Crippling power blackouts are subjecting Venezuelans to a second phase of deprivation — massive water shortages that make no distinction in income or social class.

A little further on, in the district of El Valle, a crowd formed around a manhole, drawing up water for their toilets. President Nicolas Maduro has ordered electricity rationing for the next month in a bid to buy his engineers time to fix the problem, which he blames on opposition sabotage designed “to drive the country crazy.”

The working day has officially been shortened to ease the strain on the grid and allow people to get home before dark. Schools that have been shut since March 26 are expected to reopen on Wednesday, however.

Read more: Trump tells Russia ‘to get out’ of Venezuela

In a Caracas park where a water tanker is dispensing supplies, a lawyer from the upscale northern neighbourhood of La Castellana arrives to buy the whole tanker-full for his apartment building. The driver of the 1969-era truck, which holds 2,100 gallons (8,000 liters) is quick to name his price: “For La Castellana, it’s $200.”

Despite the prohibitive price — Venezuela’s minimum wage is just over $5 — the lawyer doesn’t argue. “This is the price we have to pay to stay in Venezuela,” said the 42-year-old lawyer, who declined to give his name.

A little further on, in the district of El Valle, a crowd formed around a manhole, drawing up water for their toilets.

He said he would have to collect the money from his remaining neighbors, a third of whom have joined the exodus of 2.7 million Venezuelans the United Nations say have have left the country since the economic crisis began in 2015.

One possible solution for the lawyer and his neighbors was to sink a well to tap the aquifer at nearby El Avila hill, but that would cost $20,000. Right now, the cheaper solution is the tanker. Every day, people fill up from streams running from the hill.

William the driver gets his water at a spring in the city’s Eastern Park — with government approval — forming a line with other tanker drivers. In return, they must make three free trips on the government’s behalf to distribute water in various parts of the capital. The army enforces the agreement.

But in poor areas like March 24, the trucks are slow to arrive, playing on the nerves of locals like Carmen Veliz. She says that in other areas nearby, there has been no water “for months.” Such exasperation drove hundreds of people onto the streets Sunday to beat pots and pans in a display of outrage in different parts of the capital.

At least three people were injured in clashes with police and pro-government armed “colectivos” sent to tamp down the protests. “What is the government doing? Neither one thing nor the other,” says one woman. Referring equally to Maduro’s rival Guaido, she adds: “No one comes to help us…they are all useless.”