Rising tension between Russia and NATO 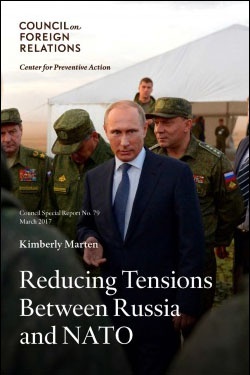 A NATO F-16 fighter jet buzzed a plane carrying Russian Defense Minister Sergei Shoigu as it flew over the Baltic Sea, but was seen off by a Russian Sukhoi-27 military jet on Wednesday.

The Baltic Sea has become an area of rising tensions between Moscow and the West. Earlier this month, Russia scrambled a fighter jet to intercept a nuclear-capable US B-52 strategic bomber as it flew over the Baltic.

Russian politicians called the episode the latest in a string of “provocations”, a day after the Russian defense ministry said an RC-135 US reconnaissance plane had swerved dangerously near a Russian fighter jet over the Baltic and that another RC-135 had been intercepted.

The Pentagon disputed that, saying the US aircraft “did nothing to provoke this behavior” and that the Russian intercept had been unsafe.

Rising tensions between Russia and the NATO

From Finland in the North to Romania in the South, tensions have been rising between West and East since President Vladimir Putin seized Crimea in 2014 and sparked a proxy war in eastern Ukraine. The U.S. has announced plans for a significant buildup of its military presence in Eastern Europe, in order to reassure NATO allies in the region that the type of aggression exerted by Russia in Crimea will not imperil their security. Russia’s expansion of its military as seen in the arms utilized in Syria, as well as its large increases in military spending, is worrisome to US and NATO.

The buildup of NATO forces on Europe’s eastern flank appears to be based solely on concerns about collective security and entirely defensive in nature but Russia perceives it as an aggression near its borders.

Russia claims that its response to the buildup will be “totally asymmetrical.” The country also claims that the buildup of NATO forces along the border is a violation of the Russia-NATO Founding Act of 1997. However, Russian aggression in Ukraine has made experts doubt the viability of this treaty now.

Russia-US buzzing each other at high seas

Russia’s expansion of its military as seen in the arms utilized in Syria, as well as its large increases in military spending, is worrisome to US and NATO.

On April 12, the USS Donald Cook was performing joint training operations in the Baltic Sea when Russian fighter jets began to engage in maneuvers. These maneuvers involved the jets flying within 30 feet of the U.S. vessel. A representative of the U.S. said that the Russian Pilots engaged in flying techniques called “strafing runs.” These tactics are typically used when attacking ships. The Russian jets, however, were unarmed during the encounter. Secretary of State John Kerry stated after the incident that under U.S. rules of engagement, the Captain of the ship had the discretion to shoot down the Russian jets in self-defense.

Another incident took place on April 17, 2016. A Russian jet engaged in what the United States called an “unsafe” and “unprofessional” interception of a U.S. aircraft in international airspace about 70 miles from Russia’s military base in Kalingrad. The United States clarified that the interception itself was not contrary to international law. The U.S. frequently engages in similar conduct against Russian Spy planes off of the coast of Alaska.

The United States claims that Russia’s actions constitute a breach of the Incidents at Sea Agreement, which was signed by the USSR and the U.S. during the Cold War in order to prevent tensions from escalating.

The latest incident in Baltic Sea is a reminder that the relationship between US and its NATO allies with Russia is deteriorating by every passing day. However, it is also an indication of the fact that Russia is now flexing its muscles and is emerging at international arena as a force to be reckoned with.

Russia under President Putin has challenged the unipolar world order which emerged after the end of Cold War. Since 2008 Russian-Georgian war, Russia has challenged US in Europe and now Middle East.

The recent incidents of buzzing of each other air crafts are not a violation of international law and is not expected to escalate into a direct confrontation between Russia and the West, but it is an indication of the fact that the unipolar world order is changing fast and the new players like Russia and China are emerging which will challenge the US hegemony.

Iraq forces launch battle to liberate Mosul from IS