Roar of thunder: JF-17 upgrades to Block 3 as it tests a new weapon 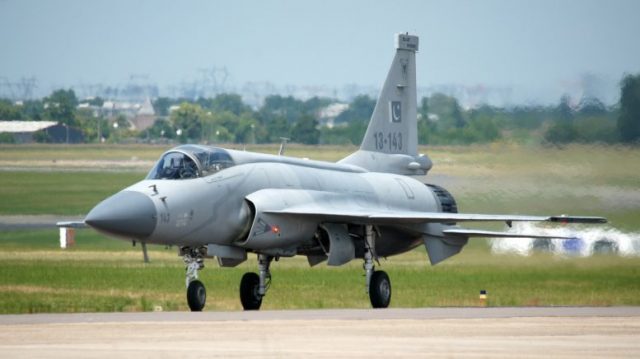 About two weeks after the JF-17 underwent its first dogfight, the jet fighter is back in the news with major developments. The development and production of JF-17 Block 3 are underway aimed at enhancing its “informatized warfare” capability and weapons, Chief Designer of the China-Pakistan co-developed fighter jet, Yang Wei said.

All related work is being carried out to upgrade the JF-17 Block’s informatized warfare and weapons, according to a report of China Aviation News.

Wei Dongxu, a Beijing based military analyst told Global Times that the JF-17 Block 3 is likely to be fitted with an active electronically scanned array radar, which can gather more information in combat, enabling the fighter jet to engage from a farther range and attack multiple targets at the same time.

It is in competition against the Indian-made Tejas and the South Korean F-50. With an initial purchase of 12 units, Malaysia is also looking to have an option for an additional 24 units in the future.

A helmet-mounted display and sight system could also allow pilots to aim whatever he sees. Pakistan, the main user of the JF-17 could further share information between the fighter and other platforms taking advantage of the whole combat system to effectively defend against strong opponents, Wei said.

With the new upgrade, the JF-17 Block 3 will match an improved version of the F-16 fighter jet, he added. JF-17, or the FC-1, is a single-engine multi-role light fighter jet jointly developed by China and Pakistan for export.

The JF-17 Thunder now has day and night capability to engage a variety of targets with pinpoint accuracy.

Lauding the efforts of Pakistani scientists and engineers, Air Chief Marshal Mujahid Anwar Khan congratulated them on the successful test fire. He said Pakistan is a peace-loving nation but if it is subjected to aggression it will respond will full force.

Meanwhile, Malaysia has shortlisted the Chinese-Pakistani jet among the roster for its Light Combat Aircraft (LCA) procurement programme. It is in competition against the Indian-made Tejas and the South Korean F-50. With an initial purchase of 12 units, Malaysia is also looking to have an option for an additional 24 units in the future.

Op-ed: Trump’s dark era, will Biden’s be any different?

Puigdemont, a hero in Catalonia, yet deemed as an embezzler in Madrid