Thanks to colonizers like Robert Clive, India was reduced from the world’s leading manufacturing nation to a symbol of famine and deprivation. Today his statue in Britain raises many questions. 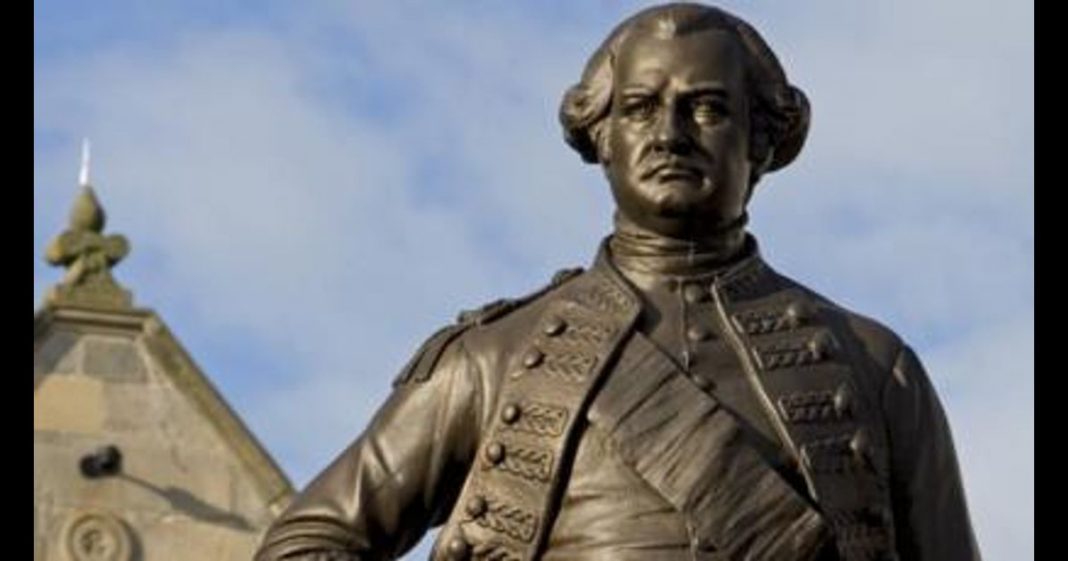 Robert Clive was twice governor of Bengal and one of the most famous East India Company’s men. During his three visits to India, he helped to lay the foundations of the British Empire in India. Although he was a civilian and a clerk by training he got a commission in the army and served under Stringer Lawrence. His statue has pride of place in the Square, Shrewsbury and back of Downing Street. William Dalrymple wrote a hard-hitting oped in the British newspaper the Guardian suggesting that it was time to remove his statue.

In November 1774 Robert Clive died by his own hand at his house in London but he left no suicide letter. Clive’s death followed soon after two whistleblowers had revealed the scale of the devastation and asset-stripping of Bengal under his rule. “We have murdered, deposed, plundered and usurped,” wrote Horace Walpole, MP at the time.

William Dalrymple writes, “Clive was hauled before parliament with calls to strip him of both his peerage and his wealth. The select committee found, in addition to lucrative insider dealing, that presents worth over £2m had been distributed in Bengal, and recommended that the ‘very great sums of money … appropriated’ by Clive and his henchmen be reimbursed.”

Why Clive has to go

Robert Clive was a vicious asset-stripper. His statue has no place on Whitehallhttps://t.co/2jkTyFcVpO— William Dalrymple (@DalrympleWill) June 11, 2020

Clive, however, was not given a formal censure. Yet, Indians have bitter memories of British rule. In their eyes they came as looters, and subjected them to centuries of humiliation. The economic figures speak for themselves. In 1600, when the East India Company was founded, Britain was generating 1.8% of the world’s GDP, while India was producing 22.5%. By the peak of the Raj, those figures had more or less been reversed: India was reduced from the world’s leading manufacturing nation to a symbol of famine and deprivation.

Aged 17, Clive went out to Madras as a £5-a-year clerk, or “writer”, with the East India Company. When the French started to try to grab India Clive became a part time soldier and soon became a military star.

His greatest exploit was the Battle of Plassey in 1757, where he defeated the French-backed Nawab of Bengal thanks largely to back-channel deals made off the battlefield.

His Shrewsbury statue has suffered occasional indignities over the years, and in 2001 there was a design study which said he was “out of scale” with The Square and suggested moving him to a “more intimate and contemplative space.” When French started to try to grab India Clive became a part time soldier and soon became a military star.

Robert Clive’s victory was to cement Britain’s control of India and make him the “virtual master of Bengal”, his achievements in battle matched only by his ability to line his own pocket.

At a time when identities matter more than anything else and earlier colonial empires are being asked to apologize for their bloody past, to have a statue of Clive is something that needs to be questioned by countries such as the UK.

Before Britain began taking down statues of its bloody, colonial past, my sister @SmitaTharoor had this fascinating conversation with musician/composer @theNitinSawhney about his experiences with racism and #unconsciousbias in the UK.

History is being re-written and new discourses are developing new perception with people demanding structural ‘corrections’ to set the historical record straight. For just one instance, Shashi Tharoor demands Britain to apologize for colonizing and exploiting our resources.

Congress MP Shashi Tharoor’s new book “An Era of Darkness” turns the spotlight on Britain’s 200-year rule in India, and argues that it destroyed the Indian economy and pushed the country back by several decades.

Tharoor in his book convincingly proves that right-wing apologists of the British empire are wrong. The colonialists were not on a civilising mission; they brutally exploited the subcontinent. From the start, the British East India Company was a profit-driven enterprise. It was set up in 1600 to trade in silk, spices and other goods and soon controlled most of India. The East India Company was the sovereign power until 1858. At that point, the British state took over after having quelled an Indian uprising.

India set for moon landing in 2020 with Chandrayaan-3