Rouhani’s re-election: No hope for better US-Iran ties, yet! 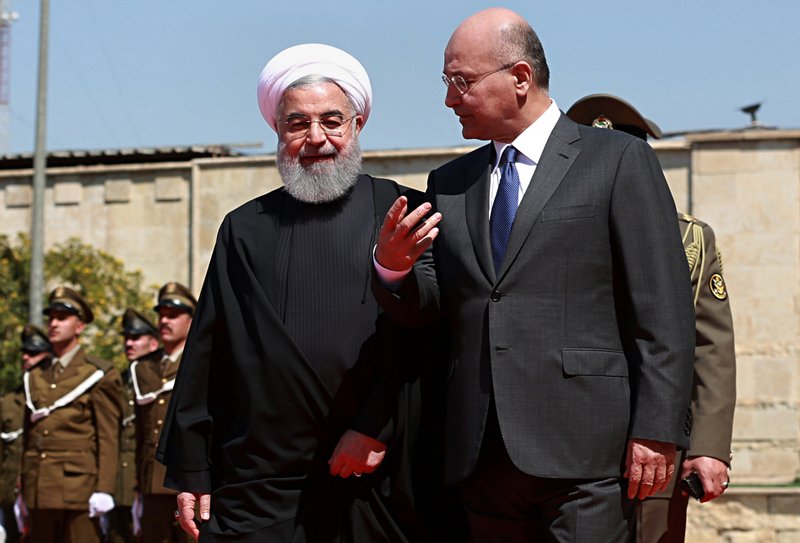 Hassan Rouhani’s magnificent victory in Iran’s presidential election, polling as much as 57% of the votes, has once again proved the resilience and vibrancy of the country’s political system. The Supreme Leader Ali Khamenei stuck to his word by preparing a level field for the candidates and allowing a genuine test of popular support. The western prognosis was that Khamenei wouldn’t want Rouhani to be re-elected. That turned out to be a totally biased assessment. Khamenei’s only appeal was that there should be a high voter turnout, which he regarded to be a vindication of the Iranian political system. In the event, over 70% of the electorate exercised their franchise.

President Trump may have knowingly contributed to Rouhani’s re-election by the perfectly-timed announcement in Washington on Wednesday that the US’ sanctions relief for Iran will continue.

The world capitals will heave a sigh of relief at the election result. Rouhani’s victory guarantees that Iranian policies will remain predictable for the coming 4-year period. His openness toward the West earned for Iran much goodwill in Europe. In turn, the firm stance taken by EU by backing the Iran nuclear deal – coupled with the strong endorsement by Russia and China as well – has left the US with no option but to fall in line. Candidate Donald Trump had vowed to tear up the nuclear agreement.

Ironically, President Trump may have knowingly contributed to Rouhani’s re-election by the perfectly-timed announcement in Washington on Wednesday that the US’ sanctions relief for Iran will continue. It was a gentle reminder to the Iranian people that their country’s isolation has ended, thanks to Rouhani’s stewardship.

Read more: Hassan Rouhani re-elected as President: Will he be able to reform Iran?

However, it is also important to remember that Rouhani succeeded in concluding the nuclear deal only because of the robust backing of Khamenei at crucial junctures of the negotiation process. The deal had many critics within the Iranian establishment, including some powerful people. But once it became clear that Rouhani enjoyed Khamenei’s confidence, they fell in line.

Without a doubt, he (Rouhani) holds a mandate for ‘change’. Expectations will be high. But it is doubtful that Rouhani will be able to meet these expectations.

Suffice to say, caricaturing Rouhani as ‘pro-West’ or Khamenei as ‘anti-West’ completely misses the point. Indeed, Iran too has its fair share of ‘westernists’ – like, say, India or Russia or China would have. In fact, the ‘westernists’ were quite visible in Rouhani’s government. Many cabinet ministers were products of American universities. (Rouhani himself had studied in the UK). But it is inconceivable that Iran will jettison its ‘strategic autonomy’. The potency of Iranian nationalism is such that despite close relations, Indians have often found their Iranian counterparts to be tough as nail at the negotiating table despite being great friends at a personal level.

Rouhani’s main opponent Ebrahim Raisi is a hugely influential figure in the religious establishment. His defeat was only possible because of Rouhani’s success in cobbling together a broad coalition of supporters from the middle class and the youth. Without a doubt, he holds a mandate for ‘change’. Expectations will be high. But it is doubtful that Rouhani will be able to meet these expectations. Much depends on the cooperation he gets from the other centers of power within the regime.

With Rouhani at the helm of affairs in Tehran, the Trump administration is unlikely to resort to a confrontationist policy toward Iran. The US knows fully well that Iran’s military build-up is defensive in character. The Iran specter enables the US to sell massive quantities of weapons to the petrodollar states in the Gulf. Saudi Arabia is just finalizing a $100 billion arms deal with the US. (Iran’s military budget stood at $12.3 billion as against Saudi Arabia’s $63.7 billion.)

It is unlikely that the Iranians will roll back their missile development program. Missile capability is Iran’s main deterrence against US or Israeli attack. Tehran will simply ignore the Trump administration’s rhetoric against Iran’s missile program.

There is a contradiction insofar as the US is unused to having “equal” relationships with other countries. Iran will insist on an equal relationship. It is a fiercely independent country and its nationalistic moorings run very deep.

The Saudi and Israeli lobbies have pulled all the stops to prevent or slow down any US-Iranian normalization in the recent years. They have a far more receptive audience in the Trump administration. On the other hand, conflict resolution in the Middle East becomes difficult for the US without Iran’s cooperation. In Syria, there are signs that the US is testing the waters to see how far Iranian presence on the ground can be rolled back.

Rouhani’s image as a ‘moderate’ does not mean that he will cave in, or that there will be an Iranian retrenchment in Syria (or Iraq). The policy calculus has been set in terms of preserving Iran’s core interests, which are, of course, non-negotiable. Tehran will remain watchful that its adversaries – US, Israel or Saudi Arabia – will not hesitate to use the ISIS as a proxy to destabilize Iran and undermine the regime. Therefore, the war against ISIS and the politics of ‘resistance’ will continue to be the key templates of Iran’s national security agenda. Rouhani can be trusted to carry forward the agenda.

In sum, the ball is really in Trump’s court. But he is unlikely to exercise the option of adopting a pragmatic policy toward Iran. It is all too obvious by now that money can easily corrupt Trump’s team – and the Saudis know how to operate in the Washington Beltway. Besides, there is a contradiction insofar as the US is unused to having “equal” relationships with other countries. Iran will insist on an equal relationship. It is a fiercely independent country and its nationalistic moorings run very deep.

Previous articleWhen you lie, your brain and body suffer!
Next articleCrackdown on social media draws ire from all quarters

20 September 2021
Previous articleWhen you lie, your brain and body suffer!
Next articleCrackdown on social media draws ire from all quarters