Within days of winning the by-election, CM Modi, at the earliest opportunity unleashed a reign of terror by calling a strike on February 28, 2002 and gave three days to the Hindus to wreak revenge upon the Muslims of his state and instructed his police not to take action against the Hindus. 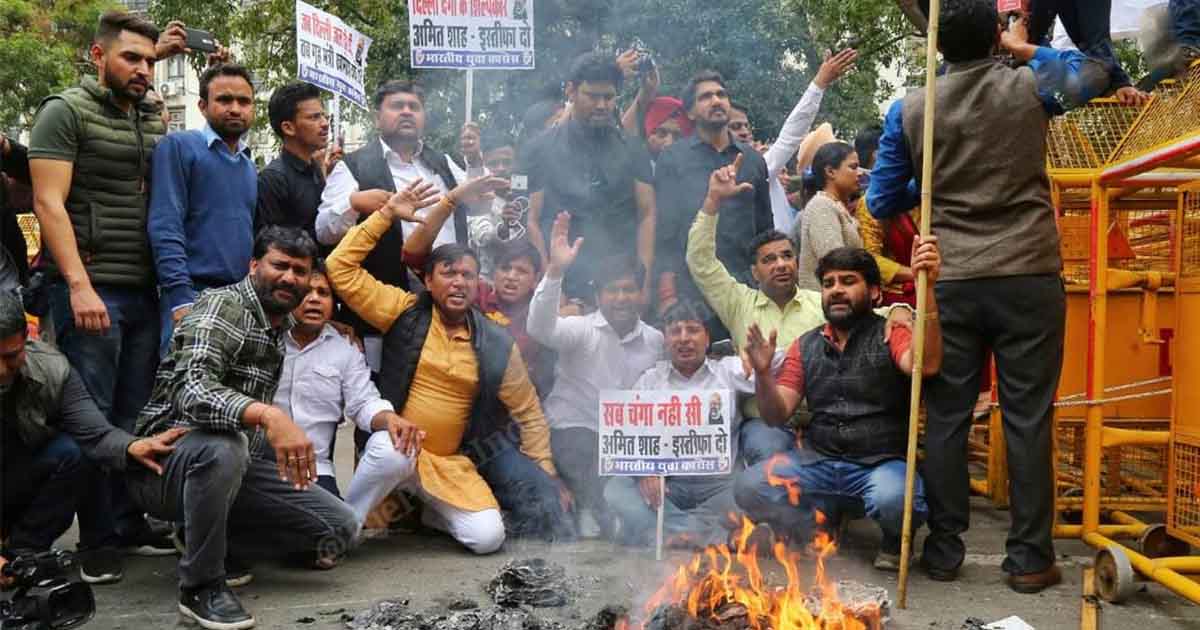 On a world tour giving speeches and collecting money for his dream of a better machine to print text, bankrupt Mark Twain visited India to recover money by lecturing and was welcomed by the governor of Bombay. The latter instructed the officials to show courtesy and be hospitable to the dignitary with tea and food. As his twang was such whenever the official heard him say anything, they served another cup of tea. They would obsequiously bring a cup of tea to oblige him. He had a surfeit of tea and felt contended that they had served him well.

That is what is happening in Delhi in talks with Samyukt Kisan Morcha leader Rakesh Tikait. The ministers used to say only what was given to them in slips of paper by officials. That means they were saying only what someone else told them to say. This kind of rote learning and officially tutoring behavior during the Modi regime had naturally Pavlvolian automated response or stimulus-response has come home to roost.

The pet dream of RSS boss Mohan Bhagwat cannot be fulfilled because India has not produced a universal genius like Al-Biruni.

Abu al-Rayhan Mohammad ibn Ahmed al-Biruni was not only a man of critical thinking but an insightful genius unparalleled in the world. The Russians, the Turks; Iran, Afghanistan, Pakistan, Libya, UNESCO, and most people in the central Asian countries have acclaimed him so. India is also waking up to the fact despite the resistance of the right-wing government. Tikait’s statement shows the hiatus between what the world says and what the parrot regime of ‘shoot the traitors’ says.

“Few periods in man’s history can boast the existence of one of those rare Intellectual giants whose genius not only embraces the knowledge of his time but reaches out to the uncharted unknown frontiers.” If CBI is a caged bird who made it so and towards what end: only issue clean chits to Modi? Coming home to roost is what damage Modi has done to our democracy, a relic.

Another fabrication is Chankya. In common parlance today Amit Shah is given this nickname. Today’s social isolation vs the old one brought about by the famed Chankya aka the dada of Sarkhej. Amit Shah ruled supreme since 1997 when he was elected MLA to Gujarat assembly. Modi chose him as his minister of state Home department. Juhapur is a section of the same area with a green line that sets off the Muslim ghettos from the Hindu majority areas. In the coronavirus era, the social isolation is remarkable; no sewage system, no proper roads, no civil amenities, like municipally supplied water and gross criminal negligence by the corporation. This stands out as an anomaly, and it is mocking to the achievement of development level in the rest of Gujarat under Modi.

The dominant wealthy class nurtured the mindset. It was prejudicial against the Muslims in general and those who have money but happen to be Muslim but not allowed to buy better homes in areas with rich civil amenities and better modern schools. Rajiv Shah, a level headed and fair-minded journalist, once asked Shah in March 2002, why not ease social and communal tension? Shah, a Vaishnav Vania orthodox Hindu was a local dada, he replied, there is no need to worry because if anything happens, it will be on the other side of the border. This refers to Juhapur. This prejudiced mindset is not a reflection of critical thinking.

Rajddep Sardesai: “So, will Amit Shah be contesting the elections? What happens to the case against him?’” Law will take its course.” That was a curt reply of Modi. But next day, Modi called on the anchor: “Can you please edit out the portion where I have spoken on Amitbhai’s case?”

This somersault puzzled the anchor who referred to a political pandit for his opinion: “Please understand, Modi owes Shah a great deal. When Shah was in jail, the CBI tried to extract a confession out of him to somehow implicate Modi in the murder case in which he was charged. The agency even promised to let him off if he turned approver. Shah refused, and from that day onwards, Modi remains obligated to Shah. Now, they are an unshakeable jodi, one soul in two bodies!” This proximity in the days of social quarantine smacks distastefully, but it is politically incorrect.

There are people like Armenians who struggled consistently to have their genocide recognized by the UNO. It took them 50 years to accomplish it. The genocide of Muslims in Gujarat 2002 went unrecognized. It is a well-known fact that Defense Minister Moshe Dayan of Israel visited India disguised as a Hindu at LK Advani and AB Vajpayee’s invitation. That opened a floodgate of repression when the memory of the demolition of Babri mosque and Muslims’ slaughter was still fresh in mind. India missed another opportunity for critical thinking.

To revive the Babri movement, Modi sarkar again sent trainloads of karsevaks or volunteers to construct the temple. When they were returning, according to a conspiracy, Godhra train was burnt from within. PM Vajpayee questioned who set fire to the train. Who spread arson in the state? The duo PM Vajpayee and CM Modi even accused that even the Muslim intestines were filled with blood. They did not know how to live with their neighbours. The PM who went to Goa conclave to change the CM of Gujarat surrendered to unreason. How could India be Vishwa guru when neither the school children nor the so-called statesmen have learnt the simple school text that a hero is one who saves a bitter enemy from falling from a cliff in his sleep and winning his heart!

Why critical thinking failed: The Pakistani émigré who chose to be the stormy petrel of India

Lal Krishan Advani was already involved in a conspiracy to kill Mohammad Ali Jinnah in Pakistan before he migrated to India. Since then, wherever he went, the place was ‘destined for a riot of darker emotion.’ He created the murk which suited evil deeds of hell conspiracy of Satan. It was revenge. There is no end to the ironic twist of the destiny of the two nations. The hate and enmity that Indian extremist Hindus should have for Pakistan were turned within for the Indian Muslims.

There are innumerable reasons why critical thinking failed, such as Chief Minister Narendra Modi’s Unknown Unknowns.

Conducting genocide in the 21st century in the full glare of the camera can have staggered perception. The whole truth cannot be known at once or in a year or a decade. The Jews meticulously maintained their records of the Holocaust. They made further studies, conducted research, and used all the best that science would help them find out traces or the remains of their dear ones who perished in the concentration camps. India saw such a holocaust of the Muslims in 2002.

The Chief Minister of Gujarat at the time, Narendra Modi, was a leader of the ultra-nationalist Hindu militia group Rashtra Swayamsevak Sangh. He was molded in the ideology of the Nazi and the Italian fascists of the thirties of the twentieth century. He was most active and secretive in 1981 and 1985 as he was irrepressible group leader of the RSS. The new century saw him as the Chief Minister of his state. Within days of winning the by-election, he became elected CM, and at the earliest opportunity, he unleashed a reign of terror by calling a strike on February 28, 2002, and gave three days to the Hindus to wreak revenge upon the Muslims of his state and instructed his police not to take action against the Hindus. This is how the first Hindutva genocide of Muslims was wrought by its architect in the office of the chief minister.

To undertake such a huge task was well planned and organized work of years of thinking. As the burning of the German parliament came handy to Hitler so did the Godhra Sabarmati Express train compartment S6 fire in the morning of February 27, 2002! The collector of Godhra Jayanthi Ravi was the first to reach there at the site of the burning. She called the incident an accident and maintained it till the evening of that day. The Chief Minister arrived there and had a closed-door meeting with VHP leader Jaideep Patel and some ministers and planned a strike for the following day. He changed the facts by announcing that the fire was a terrorist attack by Lashkar-e-Taiba. He handed over the bodies of the fire victims to Jaideep Patel and allowed the train to go to Ahmadabad.

Is China ready to be world hegemon?