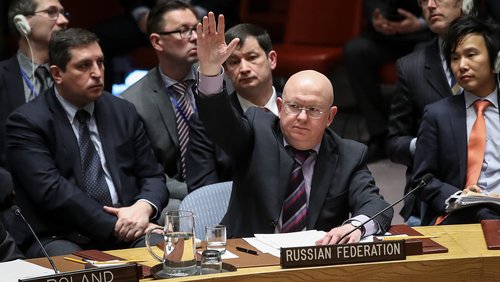 As promised Russia voted against the latest attempt by the Western powers to use the UN Security Council to impose sanctions on Syria, this time in connection with Syria’s alleged use of chemical weapons.

This is the seventh occasion that Russia has wielded its veto on Syria’s behalf.

Russia’s and China’s votes against the resolution were widely predicted.  What would have alarmed the Western powers much more was that the resolution failed to gain support from some of the UN Security Council’s nonpermanent members.

This is the seventh occasion that Russia has wielded its veto on Syria’s behalf.

read more: Are Russia and China Creating a New World Order in Eurasia?

A major diplomatic defeat for the Western power

It would have been a major diplomatic defeat for the Western powers, and a serious humiliation for them, if a resolution they had jointly sponsored had failed to receive the necessary nine votes to be passed by the UN Security Council in the absence of a veto from one of the permanent members.  Since the USSR collapsed the Western powers – provided they are united – have always had a clear majority on the UN Security Council.  The Western powers will be alarmed that the vote this time was so close and that their majority appears to have eroded.

The resolution was co-sponsored by Britain, France, and the United States.  It has its origins in a series of UN investigations on alleged Syrian chemical weapons use which began reporting in the autumn. It, therefore, traces its origins to the period of the Obama administration.

Nikki Haley, the US’s new UN ambassador, once again seems to have used what is by US diplomatic standards remarkably moderate language when criticizing Russia for wielding its veto.  Specifically, Reuters reports her saying in response to Russian President Putin’s description of the resolution as “totally inappropriate”

For my friends in Russia, this resolution is very appropriate.  It is a sad day on the Security Council when members start making excuses for other member states killing their own people. The world is definitely a more dangerous place

Even if these comments were intended ironically – which they probably were – with their calling the Russians “friends” and with their expressions not of anger but of regret they are a far cry from the passionate denunciations of Russia once engaged in by Samantha Power. The Russians will have noted the change of tone, just as they will have also noted the US’s continued support for a resolution that was quite clearly intended to embarrass them.

Russia’s Deputy UN Ambassador Vladimir Safronkov rightly complained after the vote that the resolution should never have been put to the vote at all given that it was universally known that Russia would veto it. China’s ambassador, Liu Jieyi, made essentially the same point, saying that the resolution was submitted prematurely before the investigations into the use of chemical weapons in Syria had been completed.

The Russians and the Chinese will have noted the ambiguous and conflicting signals from a new administration which quite clearly has not yet found its way.

The resolution was co-sponsored by Britain, France, and the United States.

Putting aside the issue of the conflicting signals being given out by the Trump administration, what this episode shows is that once again the Western powers have attempted to use the UN Security Council in an essentially manipulative way, in order to embarrass Russia by proposing a resolution which they knew Russia would veto, but which they hoped would expose Russia as isolated on the subject of Syria.

In the event the ploy backfired.  Instead of Russia being isolated, China and Bolivia voted with it, and Egypt, Ethiopia, and Kazakhstan quietly signaled their support for Russia by choosing to abstain.

Instead of embarrassing and isolating Russia, what this episode highlights are that on the question of Syria the weight of international opinion is starting to move behind it.

Alexander Mercouris is an editor-in-chief at The Duran. The views expressed in this article are the author’s own and do not necessarily reflect Global Village Space’s editorial policy. This piece was first published in The Duran. It has been reprinted with permission.

Philippines must prepare for a long war against ISIS