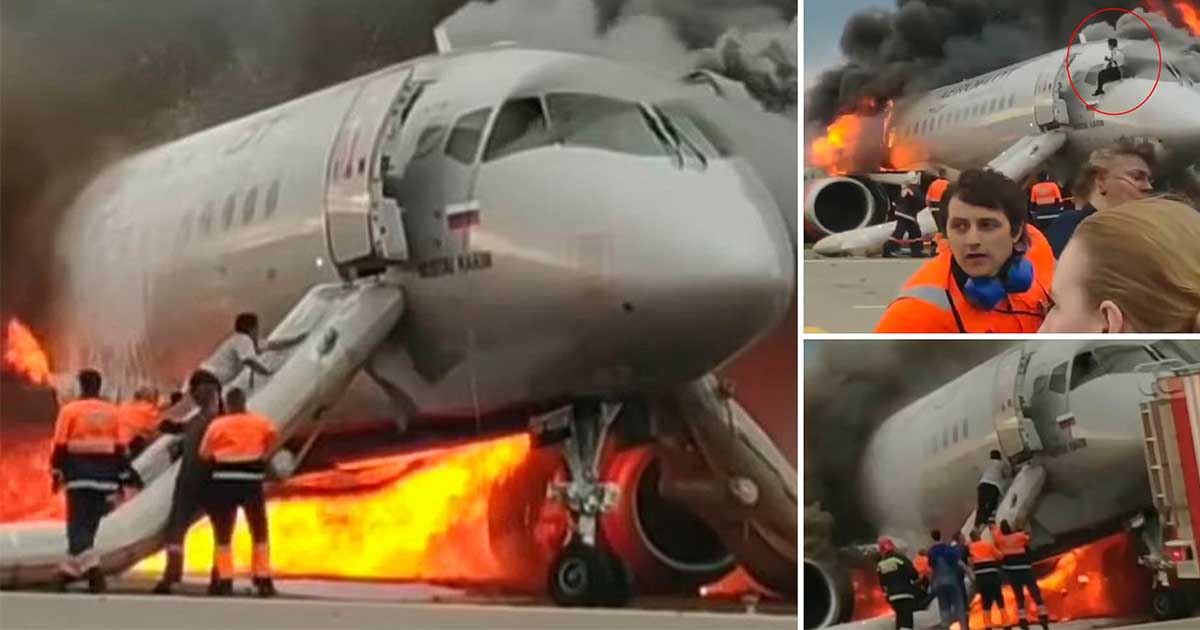 Russian investigators were on Tuesday considering pilot error as the cause of a crash-landing that saw a plane erupt in flames at Moscow’s busiest airport and kill 41 people, media reported. The first fire engine arrived at the scene only two minutes after the plane landed and burst into flames, the airport said Tuesday.

Russian television channel Ren TV posted what it said was the conversation between the pilots and air traffic control which showed that the pilot remained calm as he requested an emergency landing and did not assess the situation as critical. The Sukhoi Superjet-100 had just flown out of Sheremetyevo airport on Sunday evening when it sent out an emergency signal and circled back, bouncing on the runway and catching fire.

People could be seen leaping onto an inflatable slide at the front and running from the blazing plane as columns of black smoke billowed into the sky.

Sources in the investigation told Kommersant newspaper the Aeroflot pilots made a number of errors including flying into a thunderstorm and landing with a full tank rather than circling to use up fuel. Various sources told the business daily RBK the pilots opened a cockpit window, potentially fanning the flames, and failed to turn off engines immediately after landing.

Investigators are still examining the black boxes from the plane and have so far given no official reason for the crash. Pilot Denis Yevdokimov told media the lightning strike shortly after take-off caused the aircraft to lose communication and forced the emergency landing. In the transcript of his communications with air traffic control, Yevdokimov said: “We request return (due to) loss of radio communications.”

He said that the plane had been hit by lightning. The plane’s automatic flight control system was not working, the pilot then added. He confirmed he was going to land using only instruments and told air traffic control that “help is needed”. Passengers and crew said they saw a bright light and felt a jolt as the plane entered clouds.

Videos on social media showed the plane landing with a jolt and then speeding along the runway with flames pouring from its fuselage. People could be seen leaping onto an inflatable slide at the front and running from the blazing plane as columns of black smoke billowed into the sky.

The Sukhoi Superjet-100 had just flown out of Sheremetyevo airport on Sunday evening when it sent out an emergency signal and circled back.

The fire was fully extinguished 18 minutes after it broke out, the airport said. Air traffic control only called for emergency services to go to the runway after talking the pilot through landing, Ren TV reported. It also released a transcript of communications between emergency services which showed initial confusion over whether passengers had already been evacuated from the plane.

In the footage, several passengers were carrying hand luggage, prompting harsh online criticism. Some on social media suggested that taking the bags out of lockers could have held up the evacuation of the plane, though no witness accounts confirmed the speculation.

Survivor Oleg Molchanov, who posted a photo of his boarding pass to prove his identity, wrote on an online forum that toxic black smoke filling the cabin within seconds was the reason evacuation from the back rows was extremely difficult. Meanwhile, a video also emerged showing unidentified officials at the airport laughing as they shot footage of the fatal landing.

Videos on social media showed the plane landing with a jolt and then speeding along the runway with flames pouring from its fuselage.

Sheremetyevo said in a statement that the officials — who were not employees of the airport company or Aeroflot — would be “punished in the strictest possible way”. Ten passengers were hospitalised following the crash, and all were in a stable condition Tuesday, transport minister Yevgeny Dietrich said.

Russia’s national carrier Aeroflot was once notorious for a poor safety record but in recent years its image has improved and it has not had a fatal accident in more than a decade.  The Russian Sukhoi Superjet-100, however, has been dogged with problems since its launch in 2011 and Russia has struggled to convince foreign carriers to purchase it.

In 2012, a Superjet performing at an Indonesian air show slammed into a volcano, killing all 45 people on board. Indonesia blamed the crash on pilot error. Dietrich said there were no plans to ground the Superjet-100 model.