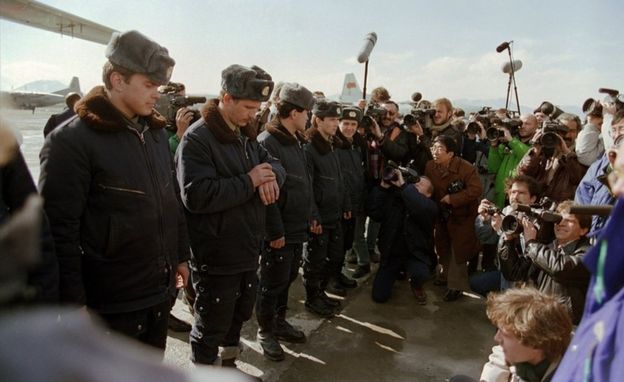 Kulbhushan Jadhav and our “surgical strike 2.0” across the LOC kept the adrenaline flowing in recent days, but it is the regional conference on terrorism hosted by Islamabad last week that is destined to be far more consequential to regional security.

Speakers of parliament from Iran, Turkey, Afghanistan, Russia and China were invited. Iran was represented by speaker Ali Larijani (a powerful figure in the foreign policy and security establishment);

Zheenbekov probably did some kite-flying. Moscow could be mooting the deployment of CSTO forces under Russian command to Central Asia’s borders with Afghanistan.

The conference focused on the Afghan situation. Volodin reported to Putin on his return from Islamabad on Monday:

Interestingly, Volodin hinted at a parallel between Syria and Afghanistan. Putin responded as follows:

Putin seemed to rule out a Russian intervention on the lines in Syria. However, the very next day (December 26), at an ‘informal’ summit of the CIS countries in Moscow, Putin reverted:

Read more: Why India has no interest in another regime change in Sri…

The accent is on Russia spearheading an integrated CIS approach to meet the terrorist threat from Afghanistan. Interestingly, President of Kyrgyzstan Sooronbai Zheenbekov took it upon himself to flag the threat of increasing expansion of Islamic State. He said:

Zheenbekov probably did some kite-flying. Moscow could be mooting the deployment of CSTO forces under Russian command to Central Asia’s borders with Afghanistan.

Meanwhile, in a rare media interview, which appeared even as the CIS summit was under way, the chief of the Russian General Staff, Army Gen. Valery Gerasimov warned that the bulk of ISIS fighters fleeing Syria after their defeat are heading to Libya and “southwestern Asian countries”. He disclosed that “according to space intelligence and other sources”, hundreds of ISIS cadres are right now undergoing training in the US military bases in Syria. The general regretted that Russian demarches with the Pentagon are getting no response.

This is the first time such an allegation has been made at Gen. Gerasimov’s level. In the weekend, RT reported an interview by Russia’s special envoy on Afghanistan Zamir Kabulov, who said,

It is unclear whether Ambassador Kabulov, who is Moscow’s ace Afghan hand, accompanied Volodin to Islamabad. Possibly, he did.

Pakistan and Iran believe that since the arrival of the US-led joint forces, areas under opium poppy cultivation expanded thousands of times, and the number of drug laboratories surged dozens of times.

These happenings of the past week serve to crystallize the regional opinion that US’ intentions in Afghanistan are geopolitical — a replay of Syrian conflict but on a much bigger scale in the Central Asian region, Russia’s Caucasus and Xinjiang . (Larijani openly called on China and Pakistan to join Iran’s alliance with Russia and Turkey to fight ISIS.) The US is targeting the Taliban and insisting that ISIS is not a serious issue in Afghanistan. The big question is how the regional states would respond.

Of course, the recrudescence of India-Pakistan border tensions and the latest US drone attack in Kurram region – although not synchronized moves – mean that Pakistan faces pressure simultaneously on its eastern and western borders. That suits the US gameplan. On the other hand, the Russian remarks suggest that Moscow is considering the practical steps necessary to liquidate the ISIS threat originating from Afghanistan.

The Afghan Peace Puzzle: Where Do We Go from Here?