Russian and Syrian bombardment on the last major rebel enclave in Syria has killed 29 civilians in a day, a monitor said Monday, as the regime's inexorable northward push raises tensions with Turkey.Moscow and Ankara had been allies with a shared world view on Middle East for past few years, but No more! Now tensions increasing between Russia & Turkey! 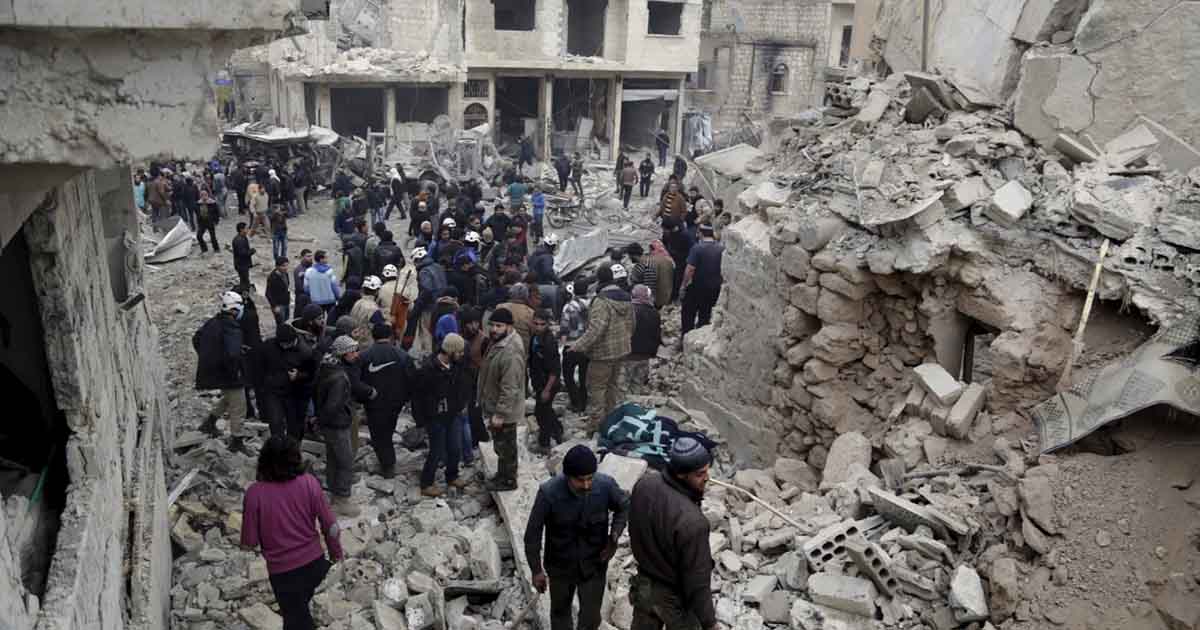 Russian and regime bombardment on the last major rebel enclave in Syria has killed 29 civilians in a day, a monitor said Monday, as the regime’s inexorable northward push raises tensions with Turkey.

Six children were among nine civilians killed early Monday in raids on the village of Abin Semaan, in Aleppo province where Russian-backed regime forces have been waging a fierce offensive to retake a key highway, said the Syrian Observatory for Human Rights.

At the site of the raids, a rescue worker carried out the body of a little girl in a thick woollen blanket, while one of her relatives pleaded to take the body, said an AFP correspondent.

Their only apparent crime in the eyes of their killers is that they are Syrians. Sad scenes from #WhiteHelmets unearthing the bodies of two men and a child from under the rubble after a Russian airstrike targeted their home in #Idlib yesterday. The deceased family raised birds. pic.twitter.com/KiE0k5S232

Volunteers shivering in near-freezing temperatures hacked away at mounds of rubble, rescuing a dust-covered man and a little child who had been trapped beneath.

The latest airstrikes follow a night of heavy bombardment by Russia and the regime that had already killed at least 20 civilians in the neighbouring provinces of Idlib and Aleppo, according to the Observatory.

Since December, Syrian government forces backed by Moscow have pressed a blistering assault against the Idlib region in Syria’s northwest.

The violence has killed more than 350 civilians and sent some 586,000 fleeing towards relative safety near the Turkish border.

The United Nations and aid groups have appealed for an end to hostilities, warning that the exodus risks creating one of the worst humanitarian catastrophes of the nearly nine-year war.

But heightened bombardment has continued.

Idlib province, along with slivers of neighbouring Aleppo and Latakia provinces, is dominated by jihadists of the Hayat Tahrir al-Sham alliance and their rebel allies.

Some three million people, half of them already displaced at least once by violence elsewhere in Syria, live in the area.

Some 50,000 fighters are also in the shrinking pocket, many of them jihadists but the majority allied rebels, according to the Observatory.

Turkish President Recep Tayyip Erdogan has given Damascus until the end of the month to pull back from the outposts, and urged Russia to convince the regime to halt its offensive

On Sunday raids by regime ally Russia left 14 people dead, including nine in the village of Kafr Nuran in southwestern Aleppo province, the monitor said.

Syrian air raids with crude barrel bombs also killed four civilians in the Atareb district east of Aleppo, while another died in artillery fire near the city of Jisr Al-Shughur and one in Ketian village in southern Idlib.

The heightened attacks on Aleppo have come as pro-regime forces close in on a section of a key motorway that has long been in their sights.

The M5 connects Damascus to second city Aleppo and is economically vital to the government after nine-years of war.

Only a two-kilometre section of the highway remain outside government control after regime forces seized large swathes of it in Idlib and Aleppo in recent weeks.

The Syrian army said in a statement Sunday it had recaptured 600 square kilometres (230 square miles) in its latest push, comprising “dozens of villages and locations” in south Idlib and west Aleppo provinces.

The escalation in northwest Syria has sparked alarm from rebel-backer Turkey which already hosts some 3.7 million Syrian refugees and fears another influx towards its border.

Since Friday, Turkey has shipped large convoys of vehicles carrying commandos, tanks and howitzer artillery pieces to shore up 12 military posts it had set up in Idlib under a 2018 deal with Russia to stave off a regime offensive.

A new Turkish convoy entered Idlib. Filmed in Sarmada and allegedly heading toward al-Atateb, Aleppo, where a Russian airstrike just killed 4 civilians, 2 of them IDPs. pic.twitter.com/KN7jXq4lLh

But the agreement has failed to stymie the government’s advance, with Turkey saying regime forces have surrounded three of its outposts despite repeated warnings against such a move.

Turkish Defence Minister Hulusi Akar on Sunday said Ankara had other plans if agreements over the region continue to be violated.

“We have Plan B and Plan C,” he said in an interview with the Hurriyet daily. “We on every occasion say ‘do not force us, otherwise our Plan B and Plan C are ready’.” He did not give details, but referred to Ankara’s military campaigns in Syria since 2016.

Turkish President Recep Tayyip Erdogan has given Damascus until the end of the month to pull back from the outposts, and urged Russia to convince the regime to halt its offensive.

The warning came after eight Turks were killed last week by regime shelling, prompting a deadly response by the Turkish army.

The confrontation between the two forces was the most serious since Ankara first deployed troops in Syria.

Pakistan is Failing Kashmir & Foreign Office Played a Part in it