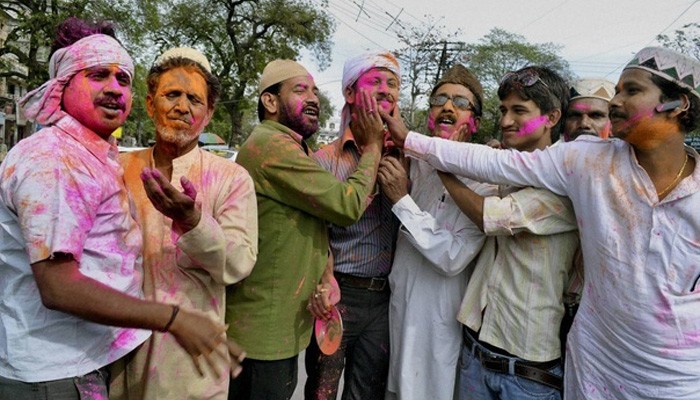 Something unprecedented happened in Pakistan this Holi. Cutting across religious barriers, the prime minister delivered a ground-breaking speech to the Hindu minority. He finally called out the radical brand of Islam; and gave a message anchored in fundamental human rights in accordance with the federal constitution.

“No matter what religion or beliefs you follow, or what part of the country you belong to, you must be provided equal access to progress and development.”
– PM Nawaz Sharif

Many of us usually criticize the ruling elite for lacking a vision that establishes the “Rule of Law”. Against all these reservations, the premier’s address marked a clear break from the undesirable — past and present — politics of expedience. He called himself the “prime minister of all religious communities,” while quoting Prophet Muhammad (S.A.W), who believed, “If a place of worship of a non-Muslim is damaged in an Islamic country, Islamic government… I will fight their case myself on the Day of Judgment.”

In a groundbreaking attempt to call out Islamic supremacy, he centered on the Article 25 (Equal Citizenry rights), “God will not ask a ruler what he did for followers of a certain religion. He will ask people such as me: what did we do for God’s creation?”

His most unambiguous words drew on the Articles 20 to 22, which guarantee every citizen the right to profess, practice, and propagate his religion; and every religious denomination and sect the right to establish, maintain, and manage its religious institutions.

“If a place of worship of a non-Muslim is damaged in an Islamic country, Islamic government… I will fight their case myself on the Day of Judgment.”
– Prophet Muhammad (S.A.W)

“No matter what religion or beliefs you follow, or what part of the country you belong to, you must be provided equal access to progress and development,” he added. Taking a dig at those involved in forced conversions of Hindu and Christian girls, Sharif said, “Forced conversions are considered a criminal practice according to our religious teachings.”

This unusually bold message coming from the Prime Minister caused considerable unease among the clerics. Sunni Ittehad Council Secretary, Allama Ashraf Jalali of the Pakistan Ahle Sunnah waJama’ah group was particularly vocal amongst those in opposition and went to the extent of alleging that Sharif had committed blasphemy. “The prime minister said such anti-Islam and blasphemous words that the Earth should have exploded,” he claimed, further adding that Sharif had “violated his oath, ideology of Pakistan, The Quran and Sunnah of Prophet. His speech is a dangerous attack on Islam.” In a video making rounds on social media, he demanded “a public apology from the prime minister (for his anti-Islam speech).” However, no one so far has come on the streets to protest, which brings up a host of tangential questions, which are not for this article to get into.

PM’s Address – A Step Ahead

Not many took much notice of the cleric’s radical interpretation of the constitutionalism. Thus, Sharif’s inclusive comments were largely welcomed as a much-needed initiative by the chief executive of a democratic dispensation. Anyone who believes in the sanctity of the constitution as a document representing the will of the people should realize that it is a document open to debate and revision to adapt to changing times, as the prime minister rightly suggested.

Regardless of what motivated him to take on the obscurantist views by the religious right, he has certainly set the ball rolling in the right direction. His message would help establish a national narrative, which is rooted in the constitution of Pakistan.

This would, hopefully, also relieve many officials of the much-dreaded pain that they have long endured in “finding a counter or alternative narrative.” Most of them continue to struggle to come up with recipes to counter extremism without realizing the crucial presence of having a narrative in the first place.

As for the narrative, the government shall have to look within Islamabad and deal with the illegal structures thriving in the capital itself. Unfortunately, religious seminaries outnumber schools in the public sector in the region. Instead of penalizing them, the CDA should acquiesce the administrators of these structures.

Read more: Muslims are the least educated amongst all the major religions

The narrative will become credible only when and if the government uses its Judicial Council to chuck out judges using religion for social and political glorification. The prime minister needs to take into confidence all citizens and inform them of the grave need to open doors for nation’s salvation. Closed avenues and restricted internet cannot lead to any considerable progress. He also needs to establish that even if some misguided social media activists are indulging in abuse of others, they should be reciprocated with informed responses, not crackdowns on the social media. Ban and closure can never serve as the answer to problems that require intelligent and smart responses.

Another test for the rule-of-law-based national narrative is to punish people whenever they are caught red-handed. So-called VIP people should no longer be allowed to take the cover of their privileges. Not only should justice be done, it should also undoubtedly be seen to be done. Mere talking about it would not lend any credibility. It only depends on how rulers walk their talk.

The persistence of Chaos: World’s deadliest laptop sells for $1.3 million