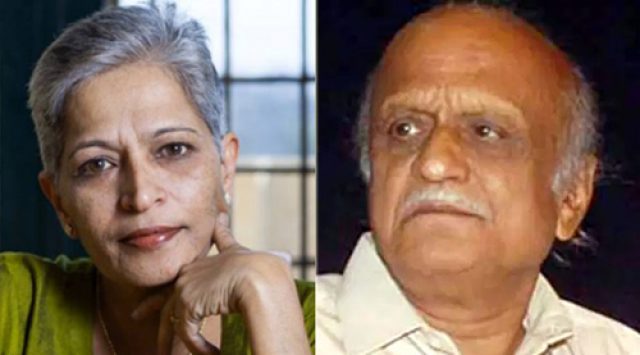 The same gun that was used to kill journalist-activist Gauri Lankesh, was used as a murder weapon to kill rationalist MM Kalburgi in Karnataka, the State Forensic Science Laboratory has confirmed in a report, sources in the SIT said. The forensic report submitted to the Special Investigation Team probing the killing of Lankesh is part of the first charge sheet filed recently by the SIT, naming KT Naveen Kumar as the accused.

However, Kumar, who was recently arrested, in a statement to the SIT has claimed he had failed to arrange the bullets to execute the plot to kill Lankesh. The charge sheet is the first official confirmation of the link between the two killings which happened after a gap of two years of each incident. Kalburgi (77) was shot dead in his house on August 30, 2015, in Dharwad, while the 55-year old Lankesh was killed on September 5, 2017.

The SIT members had earlier talked about the same-gun theory but for the first time it has come out in the open to show that Kalburgi’s murder was the handiwork of the same gang. The bullets in both cases “have been fired through a single country made pistol, chambered for 7.65 mm caliber pistol cartridges,” a source said quoting the report.

The Sanatan Sanstha’s main headquarters is at Ramnathi, Ponda in Goa. It has another major office in Panvel, Maharashtra. Moreover, it has offices in Pune, Mumbai, Miraj (Sangli) and other parts of the state.

The report also pointed out that the scratches formed by the firing pin on the bullets tallied among themselves. In his recorded statement, a copy of which is available with PTI, Naveen Kumar said he became aware of the conspiracy to kill Lankesh last August after Praveen Kumar, another suspect, told him about it.

He further said Praveen Kumar had told him to arrange the bullets to kill Lankesh, but he couldn’t complete the task. He told the SIT that he came to know of her killing through television channels. Naveen Kumar also told the SIT that he had met another suspect, Sanjay Bansare, last November, who asked him to arrange for firearms to kill K S Bhagwan, a Kannada writer and rationalist who is also a strong critic of Hindutva.

However, Naveeen Kumar’s lawyer, Vedamurthy, alleged that his client gave the statement to SIT under pressure from officials during interrogation. Five names associated with the right-wing ‘Sanatan Sanstha’ have emerged as key suspects. Four of them have Interpol Red Notices against them for their alleged involvement in earlier crimes. All five are absconding.

According to media outlets, the five accused are Rudra Patil (37) from Sangli, Praveen Limkar (34) from Kolhapur, Jayaprakash alias Anna (45) from Mangalore, Sarang Akolkar (38) from Pune and Vinay Pawar (32) from Satara. Three of the suspects namely Patil, Akolkar and Pawar are also key suspects in the murders of rationalist Narendra Dabholkar, leftist thinker and rationalist Govind Pansare, and Kannada scholar MM Kalburgi.

The Sanatan Sanstha is declared as “a non-profit organization” and has been functioning in India after its 1990 establishment by Jayant Balaj Athavale. The declared core ambition of the organization is to present spirituality in a logical manner for the common public. Its name translates into the Eternal System and is also called the Sanatana Bharatiya Sanskruti Sanstha.

The forensic report submitted to the Special Investigation Team probing the killing of Lankesh is part of the first charge sheet filed recently by the SIT, naming KT Naveen Kumar as the accused.

The Sanatan Sanstha’s main headquarters is at Ramnathi, Ponda in Goa. It has another major office in Panvel, Maharashtra. Moreover, it has offices in Pune, Mumbai, Miraj (Sangli) and other parts of the state.

Information about the organizational structure of the Sanatan Sanstha is scarce due to the secretive nature of the organization. However, it seems to be composed of different offices with an inner core that functions like a cult, headed by its leader Athavale. Its members are called sevaks, who are posted throughout the country.

The Sanatan Sanstha has formed a network which includes an affiliate called the Hindu Janajagruti Samiti (HJS), used to propel the demand for a Hindu Rashtra. Many consider the HJS to be a militant front of the Sanstha like the Bajrang Dal. Recently, it has launched another outfit, which has clear military implications, known as the “Dharam Shakti Sena,” aiming to impart military-style training in an effort to guide Hindus in the art of “self-defense”.

The Sanatan Sanstha is unique in the manner that it is a major Hindutva group that exists outside of the fold of the Sangh Parivar, the network of groups operating under the command of the Rashtriya Swayamsevak Sangh (RSS). In fact, the Sanstha has faced most attacks from the political wing of the RSS, the BJP which called for its ban and labeled it a terrorist group.

The Sanatan Sanstha has been found to be involved in a number of terrorist attacks and killings. The killings of individuals are allowed by the Sanstha’s ideology that promotes destruction on “evil doers” as a spiritual practice. The people that seem to have fallen foul of this new crusade by the Sanatan Sanstha are rationalists or simply critics who oppose traditional Indian practices.

Suspects identified for Anti-Modi Indian journalist who was murdered

A tale of terror: BJP worker fakes bombing of own home