Bernie Sanders on Friday warned Russia not to meddle in the Democratic presidential race, as Donald Trump angrily dismissed assertions that Moscow was again seeking to boost his election chances. 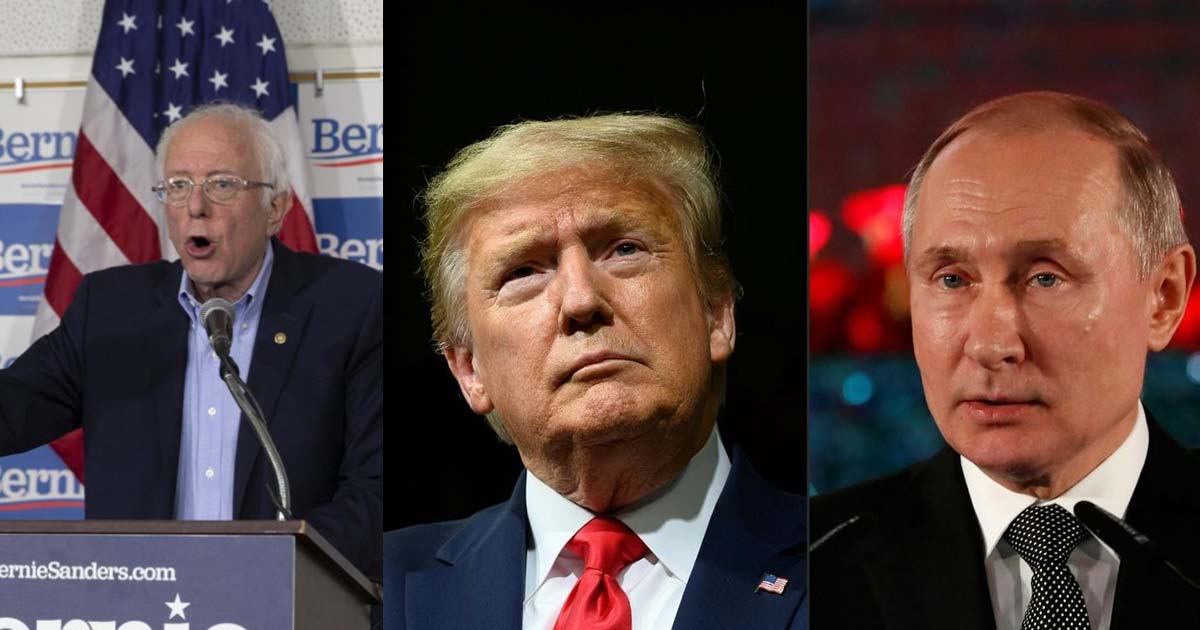 Bernie Sanders on Friday warned Russia not to meddle in the Democratic presidential race, as Donald Trump angrily dismissed assertions that Moscow was again seeking to boost his election chances.

Trump has come under fresh fire for removing US intelligence chief Joseph Maguire, replacing him with a loyal partisan with no direct experience in the field, days after Maguire’s staff told lawmakers that Russia was again interfering in a US election to support Trump.

Sanders, a self-described socialist who is leading the race for the Democratic nomination to challenge Trump in November, told reporters that US officials briefed him “about a month ago” of efforts to interfere in the 2020 race.

White House hopeful Bernie Sanders is demanding Russia “stay out” of the #USElections after reports emerged that Moscow was interfering in the presidential race to help the Democratic frontrunner’s campaign.https://t.co/xloaCV6zRa— Al Arabiya English (@AlArabiya_Eng) February 22, 2020

“Unlike Donald Trump, I do not consider (Russian President) Vladimir Putin a good friend. He is an autocratic thug who is attempting to destroy democracy and crush dissent in Russia,” Sanders said in a statement.

“I don’t care, frankly, who Putin wants to be president,” he added. “My message to Putin is clear: stay out of American elections, and as president I will make sure that you do.”

His comments came moments after The Washington Post reported that US intelligence told Sanders that Russia was seeking to help his campaign.

The form of assistance was unclear but Sanders has suggested that Russia could be behind belligerent online remarks by his professed supporters that have drawn condemnation from other candidates.

An exhaustive report by former FBI chief Robert Mueller found that Russia backed Trump’s 2016 campaign, including by manipulating social media, but did not find that the campaign colluded with Moscow.

Trump has showed irritation at any suggestions he won because of Russia. Speaking at a rally in Las Vegas, Trump said he had heard a “rumor” that “Putin wants to make sure I get elected.”

“Wouldn’t he rather have, let’s say, Bernie?” he said.

He earlier tweeted that accounts of Russian support were a “hoax” and “misinformation campaign” by Democrats “who still have been unable to, after two weeks, count their votes in Iowa,” which held the first contest among candidates.

In Moscow, Kremlin spokesman Dmitry Peskov said the allegations were “like the usual paranoid announcements, which unfortunately will multiply as we get closer to the election.”

“Of course, they have nothing to do with the truth,” he said.

President Vladimir Putin, however, acknowledged when he met Trump in July 2018 that he supported the populist billionaire’s campaign, seeing him as friendlier to Moscow than rival Hillary Clinton.

Trump was later impeached in a separate scandal over holding back military aid to Ukraine, which is fighting Russian-backed separatists, to pressure the Kiev government to dig up dirt on a Democratic candidate.

Read more: US accused of interference in upcoming Israeli elections

“By trying to prevent the flow of intelligence to Congress, Trump is abetting a Russian covert operation to keep him in office for Moscow’s interests, not America’s,” he wrote on Twitter.

“It should worry all of us that we now live in an America where one political party seems to think that foreign interference helps them in an election,” she said at a CNN forum with voters in Nevada.

“Our intel agencies say Putin is interfering in our election to help Trump,” he wrote on Twitter. “What’s the definition of treason?”

Few Republican lawmakers immediately spoke out, although Trump’s allies in the past have questioned why Russia would favor him.

While Trump has spoken with admiration about Putin, his administration has provided military aid to Ukraine and pushed through sanctions that hit Moscow.

The New York Times, quoting anonymous sources, reported that Trump lashed out not at the purported Russian interference but at Maguire for allowing his staff to brief lawmakers particularly Adam Schiff, the House intelligence chief who also led the impeachment drive.

While Maguire would have been obliged to leave next month as he was serving in acting capacity, Trump on Wednesday replaced him with Richard Grenell, the outspoken US ambassador to Germany who has played down Russian interference in 2016.

Grenell was an unusual choice for the largely behind-the-scenes job as he has no direct intelligence experience and has made waves by irritating German leaders with his prolific online commentary.