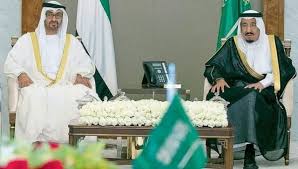 An Emirati official called for the Saudi-led anti-terrorist coalition to bomb Al Jazeera.

Dubai’s security chief Lieutenant General Dhahi Khalfan said that the outlet needs to be targeted for its purported support of terrorism, accusing it of provoking Daesh’s attack in northern Sinai late last week and being responsible for destabilizing Arab countries. It’s unlikely that the Riyadh-based military alliance will strike the Qatari news station, but this inflammatory comment reveals the UAE’s hostile intentions of transforming what had hitherto been an economic and infowar against Qatar into a physical one.

Since it’s instead more functionally focused on intelligence sharing and other passive forms of cooperation as opposed to active state-to-state enforcement ones.

Moreover, this attention-grabbing rhetoric signaled the UAE’s desire that the anti-terrorist alliance fulfills an anti-Qatari function, similar in a sense to how Saudi Crown Prince Mohammed Bin Salman’s ridiculous characterization of the Ayatollah as a “new Hitler” served the same vis-à-vis Iran. The end result is that the UAE and Saudi Arabia want to use their military grouping to put pressure on Qatar and Iran, especially since the two signed a trilateral agreement with Turkey the other day to relieve the economic effects of the GCC blockade on the tiny peninsular country.

The challenge, though, is that coalition leader Raheel Sharif, the famous Pakistani General who victoriously vanquished most of the Afghan-originating terrorists in his country through the legendary operation Zarb-e-Azb, reportedly made his leadership of this organization contingent on the three conditions of having him not be under anyone’s command, including Iran in the framework, and being allowed to mediate between Muslim countries. It’s obvious that the second one wasn’t met, but that doesn’t mean that the first and third aren’t in effect.

Who’s more capable of leading an anti-terrorist alliance than an anti-state one anyhow due to his track record of credentials and Pakistan’s desire to “balance” between both competing Great Powers.

The relevancy that all of this has to the UAE security official’s threats against Al Jazeera and the Saudi Crown Prince’s comparison of the Ayatollah to a “new Hitler” is that such statements are likely just chest-thumping bluster and ominous signals of intent, but probably won’t be channeled into action because of the responsible restraints being imposed on the organization by General Sharif, who’s more capable of leading an anti-terrorist alliance than an anti-state one anyhow due to his track record of credentials and Pakistan’s desire to “balance” between both competing Great Powers.

Read more: There’s more to the Saudi-“Israeli” alliance than meets the eye

Another way of interpreting those comments is that they were also threateningly meant as a warning to the coalition’s weaker members that they must swear eternal loyalty to Saudi Arabia and the UAE otherwise they dangerously risk falling out of their favor and becoming the coalition’s implied targets too.

The end result is that the UAE and Saudi Arabia want to use their military grouping to put pressure on Qatar and Iran, especially since the two signed a trilateral agreement with Turkey.

Viewed in this manner, the smaller members of the approximately 40 states that are part of this coalition are essentially caught in a protection racket whereby they must pay yearly fees and possibly produce a certain number of troops as a modern-day form of “tribute” in order to curry favor with Riyadh and Abu Dhabi and avoid “provoking” their melodramatic condemnation.

If they refuse, then this over-hyped paper tiger isn’t exactly capable of strong-arming them into compliance, since it’s instead more functionally focused on intelligence sharing and other passive forms of cooperation as opposed to active state-to-state enforcement ones, which is why Saudi Arabia and the UAE have to overcompensate with fear mongering polemics.

Biden & Yemen: Will He Do The Right Thing Even For The Wrong Reasons?