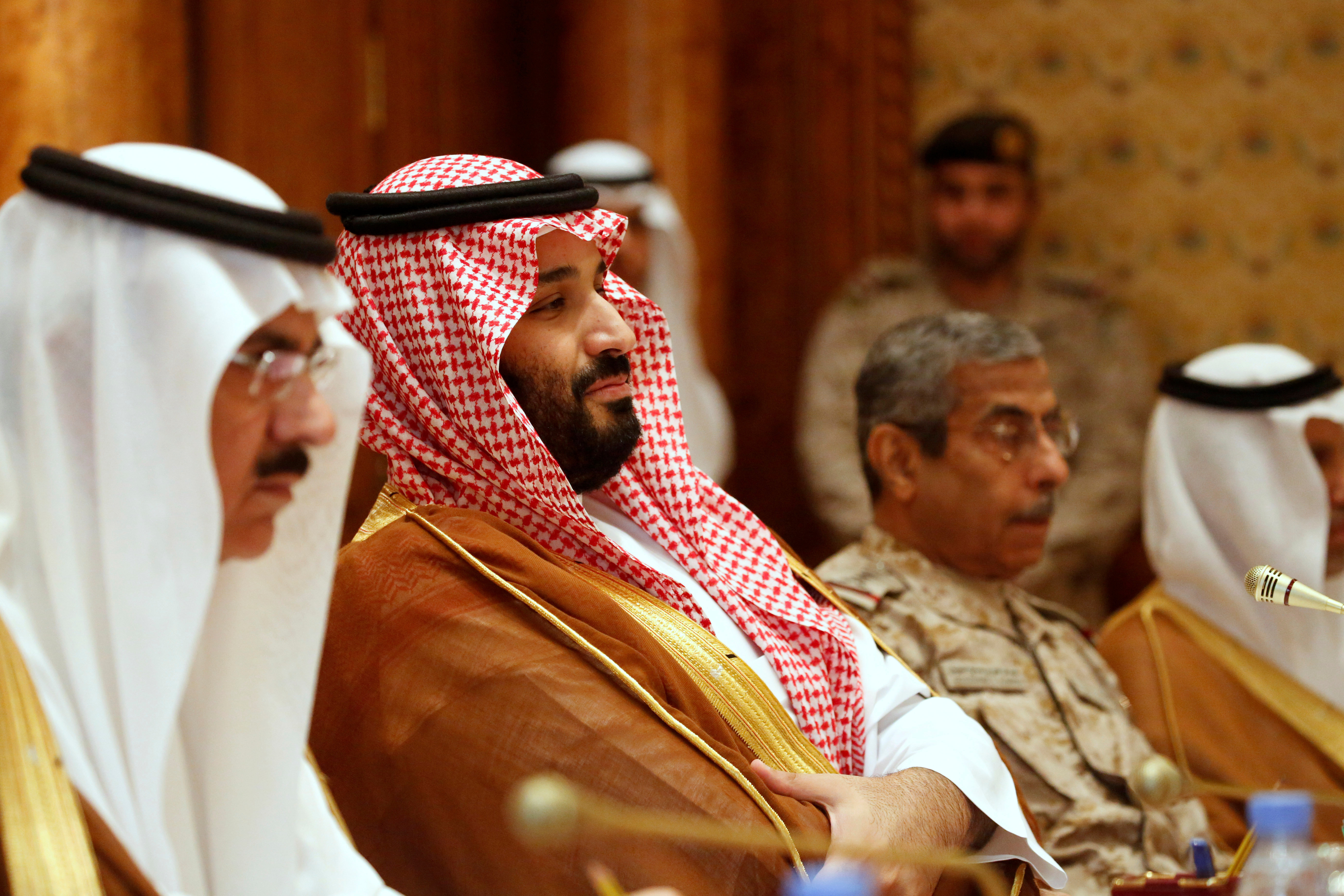 The kingdom, despite Prime Minister Saad Hariri complicating Saudi efforts to curb the political and military power of Hezbollah, the country’s Shiite militia, by putting on hold his decision to resign, is signalling that it is looking beyond Lebanon to fulfil Prince Mohammed’s vow in May that the fight between the two rivals would be fought “inside Iran, not in Saudi Arabia

Speaking earlier this month, Saudi Foreign Minister Adel al-Jubeir warned that “any way you look at it, they (the Iranians) are the ones who are acting in an aggressive manner. We are reacting to that aggression and saying, ‘Enough is enough. We’re not going to let you do this anymore.’”

The Kingdom’s media efforts remain woefully behind where it needs to. In an age where information is disseminated so rapidly, the Kingdom has no excuse but to reach out to the American people,” Mr Al-Ansari said.

Militant Iranian Arab nationalist exiles this week started broadcasting promos for an allegedly Saudi-funded satellite television station that would target Iran’s oil-rich province of Khuzestan. It was the latest indication that Saudi Arabia was mulling an effort to undermine the government in Tehran by capitalizing on grievances among Iran’s ethnic minorities. Ahmad Mola Nissi, a 52-year old exile associated with the television, was mysteriously shot dead in The Hague earlier this month.

Read more: Desert Kingdom in transition: Will Muhammad Bin Salman be the real…

Pakistani militants in the province of Balochistan have reported a massive flow of Saudi funds in the last year to Sunni Muslim ultra-conservative groups while a Saudi thinktank believed to be supported by Prince Mohammed published a blueprint for support of the Baloch and called for “immediate counter measures” against Iran.

Prince Mohammed’s track record in confronting Iran more aggressively is at best mixed. The kingdom’s 2.5-year old intervention in Yemen has driven Iran and the Houthis closer together and raised the spectre of the rebels organizing themselves on Saudi Arabia’s border with Hezbollah as their model.

Saudi backing of Syrian rebels failed to turn the tables on President Bashar al-Assad, a key Iranian ally, while the kingdom reversed its 13-year boycott of Iraq in a bid to counter Iranian influence through engagement with Baghdad.

“The United States must realise that they are the number one in the world and they have to act like it,” Prince Mohammed told The Economist in early 2016.

In Lebanon, the odds are against Hezbollah bowing to pressure that it disarms and halt its military involvement beyond the country’s borders even if the group appeared to want to avert a crisis by announcing that it was withdrawing forces from Syria and Iraq. Hezbollah also denied that it was supplying weapons to the Houthis, including a ballistic missile fired at the airport of the Saudi capital Riyadh earlier this month.

“So far, the Iranians have effectively won in Lebanon, are winning in Syria and Iraq, and are bleeding the Saudis in Yemen… There is precious little evidence to suggest that the Saudis have learned from their earlier failures and are now able to roll back Iranian influence in the Middle East,” said researcher and Jerusalem Post columnist Jonathan Spyer.

Read more: The Ummah: The fresh Princes of Bel Arabia and Muhammad…

If Prince Salman’s apparent strategy and track records risk escalating regional tensions and raising questions about Saudi Arabia’s ability to successfully confront Iran, it also may be based on a misreading of the dynamics of US policymaking.

Prince Salman appears to believe that he can ignore signals from the State Department, Pentagon and members of Congress, who have been counselling greater caution, as long as he is backed by US President Donald J. Trump and Jared Kushner, a senior advisor and the president’s son-in-law. The Saudi crown prince appears to be reinforced in this belief by his United Arab Emirates counterpart, Crown Prince Mohammed bin Zayed, with whom he coordinates closely.

The evolution of the US approach to the six-month-old UAE-Saudi-led boycott of Qatar suggests a complexity of policy making in Washington that both princes have so far failed to take into account or effectively address.

The kingdom’s 2.5-year old intervention in Yemen has driven Iran and the Houthis closer together and raised the spectre of the rebels organizing themselves on Saudi Arabia’s border with Hezbollah as their model.

Al-Monitor Washington correspondent Laura Rozen reported that UAE ambassador Youssef al-Otaiba in June called then-US Assistant Secretary of State for Near Eastern Affairs Stuart Jones in the middle of the night to give him advance notice of the boycott. “What are you guys doing? This is crazy,” Mr Jones told the ambassador. To which Mr Otaiba responded: “‘Have you spoken to the White House?’”

Despite Mr. Trump’s expressed support for the Saudi UAE position involving a refusal to negotiate or lift the boycott unless Qatar accepts demands that would compromise its ability to chart its own course, US policy administered by Secretary of State Rex Tillerson and Secretary of Defense James Mattis’ has pushed for a negotiated resolution – a position far closer to that of Qatar.

Speaking at the conference in the UAE, Republican lobbyist Ed Rogers urged Gulf countries to broaden their outreach in Washington from one narrowly focused on Mr Trump’s White House to other branches of government as well Democrats in Congress. “I made the point that lobbying efforts and Washington should not ignore the Democrats in Congress and that they may be coming back in one house or another in 2018,” Mr Rogers told Al-Monitor.

The US House of Representatives last week, in an indication of the risk of relying exclusively on the White House, set the stage for a debate of US military support for Saudi Arabia’s ill-fated Yemen by overwhelmingly adopting a non-binding resolution that recognized that the aid was being provided without Congressional authorization. The resolution noted that Congress had exclusively authorized operations against jihadist militants in Yemen, not against domestic rebel groups like the Houthis.

The Saudi and UAE reading of the lay of the land in the US capital and singular reliance on the White House is somewhat surprising given that both Mr Al-Otaiba and Mr Al-Jubeir, the Saudi foreign minister, have a track record as savvy Washington operators, and the fact that a host of public relations and lobby firms are paid hefty fees to advise the kingdom.

Widely viewed as one of the most well-connected and influential foreign diplomats in Washington, Mr Al Otaiba has been ambassador to the United States for almost a decade. Educated in the US, Mr Al-Jubeir served in the kingdom’s Washington embassy, and years later became ambassador to the US before being appointed foreign minister.

The Saudi and UAE focus on the White House is rooted in Prince Salman’s efforts, dating back to his initial rise in early 2015, two years before Mr Trump came to office, to counter President Barak Obama’s policy of reducing US engagement in the Middle East.

“The United States must realise that they are the number one in the world and they have to act like it,” Prince Mohammed told The Economist in early 2016. He suggested that the sooner the US re-engages the better. Re-engagement meant to the Saudi leader, aggressive US support for the kingdom’s efforts to shape the Middle East and North Africa in its image.

Mr Trump’s policy priorities in the region, including confronting Iran, fighting extremism, and solving the Israeli-Palestinian conflict in a bid to open the door to overt Israeli-Saudi cooperation, stroked with those of the crown prince. Those goals are shared in Washington beyond the White House, but many in the administration and Congress worry that Prince Mohammed’s way of achieving them may either backfire or be counter productive.

In a sign of concern, the State Department this week cautioned Americans travelling to Saudi Arabia. In a statement, it warned, “US citizens to carefully consider the risks of travel to Saudi Arabia due to continuing threats from terrorist groups and the threat of ballistic missile attacks on civilian targets by rebel forces in Yemen.”

Mr. Trump’s expressed support for the Saudi UAE position involving a refusal to negotiate or lift the boycott unless Qatar accepts demands that would compromise its ability to chart its own course.

Salman Al-Ansari, the head of the Washington-based Saudi American Public Relation Affairs Committee (SAPRAC), advised Saudi Arabia, days after Mr Trump was inaugurated, to reach out to different segments of American society in what he described as the kingdom’s real battle. “One of Saudi Arabia’s glaring weak points is public diplomacy, especially with regards to communicating its economic and national security concerns to the American public. The Kingdom’s media efforts remain woefully behind where it needs to be… In an age where information is disseminated so rapidly, the Kingdom has no excuse but to reach out to the American people,” Mr Al-Ansari said.

why do we not use the magnetic energy the Earth provides to create electricity?