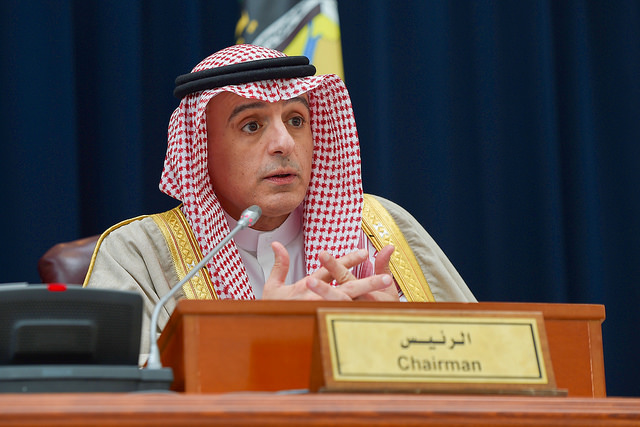 A Saudi and UAE-driven campaign to isolate Qatar and, by extension, Iran puts non-Muslim Arab states in a bind and tests the degree of Saudi soft power garnered in decades of massive spending on the propagation of anti-Iranian, anti-Shiite Sunni Muslim ultra-conservatism.

The Saudi-UAE campaign, building on an increasingly vicious cyber and media war against Qatar, kicked into high gear on Monday with the kingdom, the Emirates, Bahrain, and Egypt breaking off diplomatic relations and cutting air and sea traffic with Qatar and a 41-nation Saudi-led, Pakistani-commanded military alliance suspending Qatar’s participation in operations in Yemen.

The Saudi-UAE campaign is reminiscent of a similar failed effort by Gulf states in 2014, but this time round sets the bar far higher: it aims to force non-Arab states to take sides in a four-decades-old proxy war between Saudi Arabia and Iran.

The suspension came a day after Qatar said that six of its soldiers had been wounded in Yemen “while conducting their duties within the Qatari contingent defending the southern borders of the Kingdom of Saudi Arabia.”

The four Arab countries announced their move in similar statements. In its statement, Bahrain blamed Qatar’s “media incitement, support for armed terrorist activities, and funding linked to Iranian groups to carry out sabotage and spreading chaos in Bahrain” for its decision.

Bahrain, a majority Shiite nation ruled by a Sunni minority, has blamed Iran for a popular uprising in 2011 that it brutally squashed with the help of Saudi troops and for subsequent intermittent protests and violence.

The Saudi-UAE campaign is reminiscent of a similar failed effort by Gulf states in 2014, but this time round sets the bar far higher: it aims to force non-Arab states to take sides in a four-decades-old proxy war between Saudi Arabia and Iran that has escalated in recent years and persuade the Trump administration to come down hard on Qatar because of its refusal to join the anti-Iranian Saudi bandwagon and its ties to Islamist and militant groups.

The US and Qatar

Qatar hosts the sprawling Al-Udeid Air Base, the largest US military facility in the Middle East, which is home to the U.S. military’s Central Command and some 10,000 American troops.

Robert Gates, a former US defense secretary and director of central intelligence, warned last week at a Foundation for the Defense of Democracies gathering on Qatar and the Brotherhood that Qatar risked losing its hosting of US forces if it failed to revise its policies. “The United States military doesn’t have any irreplaceable facility,” Mr. Gates said.

The rupture in diplomatic relations and military suspension like the media campaign ignored Qatar’s assertion that its websites had been hacked.

Ed Royce, the Republican chair the House Foreign Affairs Committee, told the gathering that “if it doesn’t change, Qatar will be sanctioned under a new bill I’m introducing to punish Hamas backers,” a reference to Qatari support for the Islamist group that controls the Gaza Strip.

The two men were speaking to the media and cyber war erupted with Qatari claims that several of its media websites had been hacked with a fake report attributing comments to Qatari Emir Sheikh Tamim bin Hamad Al Thani that were in line with the Gulf state’s policy but that Qatar says he did make. The US Federal Bureau of Investigation (FBI) is helping Qatar investigate the alleged hack.

In a leaked email, UAE ambassador to the United States Yousef Al-Otaiba told Mr. Gates on the eve of his appearance at the Foundation gathering that UAE Deputy Crown Prince Mohammed bin Zayed “MBZ sends his best from Abu Dhabi” and “he says ‘give them hell tomorrow’.” Mr. Al-Otaiba was responding to an email in which Mr. Gates said that his appearance gave him a chance “to put some folks on notice.”

The rupture in diplomatic relations and military suspension like the media campaign ignored Qatar’s assertion that its websites had been hacked and treat the report as accurate.

US Secretary of State Rex Tillerson, speaking on the sideline of a bilateral meeting with Australian officials in Sydney that was also attended by Defence Secretary James Mattis, appeared to express implicit support for the Saudi-UAE-led move.

“I think what we’re witnessing is a growing list of some irritants in the region that have been there for some time. And obviously they have now bubbled up to a level that countries decided they needed to take action in an effort to have those differences addressed,” Mr. Tillerson said.

Scores of Muslim nations signed up for a military alliance created in 2015 by Saudi Deputy Crown Prince Mohammed bin Salman initially to support the kingdom’s military intervention in Yemen. The alliance’s purpose was reformulated to counter political violence when it became clear that many Muslim nations, including Malaysia, Indonesia, and Pakistan were reluctant to become embroiled in what has become for the kingdom a fiasco and public relations disaster.

Pakistan’s diplomatic relations with Saudi Arabia and the UAE initially soured after the Pakistani parliament in 2015 rejected a Saudi request for Pakistani military assistance to Yemen.

Non-Arab Muslim nations, insisting that their commitment was to protect the holy cities of Mecca and Medina and to counter political violence, were equally hesitant of being sucked into the kingdom’s all but the military confrontation with Iran.

The rupture in Arab diplomatic relations with Qatar and military alliance suspension raises the stakes for many non-Arab Muslim nations. It threatens to jeopardize their relations with Qatar, a major gas supplier and economic and commercial partner, and force them to choose between Saudi Arabia and Iran.

Pakistan’s diplomatic relations with Saudi Arabia and the UAE initially soured after the Pakistani parliament in 2015 rejected a Saudi request for Pakistani military assistance to Yemen.

The unprecedented decision ultimately left Pakistan with no choice when the kingdom two years later asked it to allow General Raheel Sharif, who had just retired as chief of army staff, to take over the command of the Saudi-led military alliance.

Pakistan, despite insisting that General Sharif would use his position to mediate between Saudi Arabia and Iran, has seen violence along its volatile border with Iran increase, relations with the Islamic Republic deteriorate and prompted calls for Pakistan to recall General Sharif.

Similarly, Malaysian defense minister Datuk Seri Hishammuddin Hussein announced in March that Malaysia and Qatar were elevating their diplomatic ties by forming a High-Level Committee (HLC) to focus on the structural framework of both countries’ defense institutions.

“There are only a few countries that we have elevated our relationship with (to the level of having an) HLC signed. And now, our relationship has reached a level that we can ink an HLC with Qatar, hopefully,” Mr. Hishammuddin said.

Responding to the rupture in diplomatic relations and the military suspension, sources close to the Malaysian foreign ministry said that the government was advising its agencies to remain neutral in the dispute with Qatar. Some sources cautioned however that the defense and interior ministries may adopt a more independent approach.

Bahrain blamed Qatar’s “media incitement, support for armed terrorist activities, and funding linked to Iranian groups to carry out sabotage and spreading chaos in Bahrain” for its decision.

Civil servants in the defense ministry expressed concern when Mr. Hishammuddin last year agreed to let 300 Malaysian paratroopers participate in a military exercise organized by the Saudi alliance. Critics in the ministry were further taken aback when Mr. Hishammuddin obliged them to endorse Saudi funding for the King Salman Centre for Moderation (KSCM).

Read more: What is Qatar’s Strategic Relevance in the Contemporary Middle East?

The center, under the auspices of the ministry’s think tank, the Malaysian Institute of Defence and Security (MIDAS), seeks to counter jihadist messaging in Southeast Asia. An internal ministry memo said MIDAS had a “strategic interest to be collaborating with various institutions internationally particularly from Saudi Arabia.”

Will Imran Khan get disqualified today?