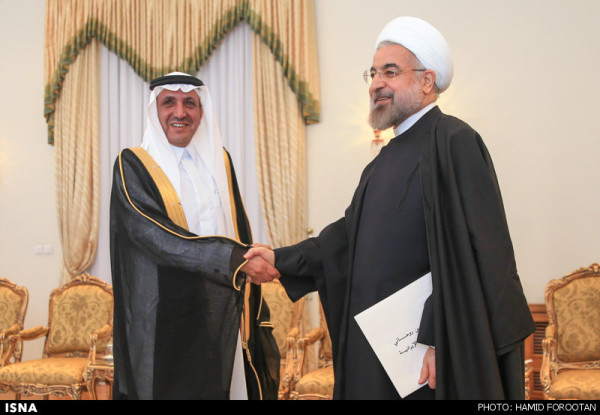 Recent moves by Saudi Arabia and the United Arab Emirates suggest that the two Gulf states may be looking for ways to reduce tensions with Iran that permeate multiple conflicts wracking the Middle East and North Africa.

The moves, including a rapprochement with Iraq and a powerful Iraqi Shiite religious and political leader as well as prosecution of a militant Saudi cleric on charges of hate speech, and leaked emails, point towards a possible willingness to engage with Iran more constructively. A dialing down of Saudi-Iranian tensions could contribute to a reduction of tensions across the Middle East and North Africa.

At the same time, however, a series of statements and developments call into question how serious Saudi Arabia and the UAE may be about a potential rapprochement with Iran. Further complicating matters, is the fact it is unclear who is driving a potential overture to Iran, Saudi Crown Prince Mohammed bin Salman or his UAE counterpart, Crown Prince Mohammed bin Zayed.

The UAE, although much smaller in size and population than Saudi Arabia, has been a, if not the driver, of recent events in the Middle East and North Africa, including the ill-fated two-month old diplomatic and economic boycott of Qatar and developments in the war in Yemen.

Iraq is emerging as a bell weather of the next phase in the Saudi-Iranian rivalry that has complicated, if not exacerbated

Mr. Abrams quipped about the UAE’s newly-found assertiveness in a mail to Mr. Al-Otaiba: “Jeez, the new hegemon! Emirati imperialism! Well if the US won’t do it, someone has to hold things together for a while.” Mr. Al-Otaiba responded: “Yes, how dare we! In all honesty, there was not much of a choice. We stepped up only after your country chose to step down,” a reference to perceptions that President Barak Obama had been disengaging from the Middle East.

Discussing the UAE’s relationship with Saudi Arabia and Prince Mohammed, Mr. Al-Otaiba went on to tell Mr. Abrams that “I think in the long term we might be a good influence on KSA (Kingdom of Saudi Arabia), at least with certain people there. Our relationship with them is based on strategic depth, shared interests, and most importantly the hope that we could influence them. Not the other way around.”

In his exchange with Mr. Indyk as well as Mr. Ignatius, Mr. Al-Otaiba, who had been promoting the Saudi prince in Washington for the past two years, was unequivocal about UAE backing of the likely future king as an agent of change who would adopt policies advocated by the UAE.

“I think MBS is far more pragmatic than what we hear is Saudi public positions,” Mr. Al-Otaiba said in one of the emails, referring to Prince Mohammed by his initials.  I don’t think we’ll ever see a more pragmatic leader in that country. Which is why engaging with them is so important and will yield the most results we can ever get out of Saudi,” the ambassador said. “Change in attitude, change in style, change in approach,” Mr. Al-Otaiba wrote to Mr. Ignatius.

Describing a meeting with Saudi Prince Mohammed in an email to Mr. Al-Otaiba dated April 20, Mr. Indyk recounted that the prince “was quite clear with Steve Hadley and me that he wants out of Yemen and that he’s ok with the US engaging Iran as long as it’s coordinated in advance and the objectives are clear.”

At first glance, Prince Mohammed’s position, expressed prior to US President Donald J. Trump’s landmark visit to the kingdom in May and the Gulf crisis, clashes with Mr. Trump’s efforts to find a reason not to certify Iranian compliance with the two-year old nuclear agreement that led to the lifting of international sanctions against the Islamic republic. Under the agreement, Mr. Trump must certify to the US Congress Iranian compliance every three months and is next due to do so in October.

The devil is in the details, the key phrase in Prince Mohammed’s remarks is the demand that “the objectives are clear.” The emails did not spell out what the prince met. Senior Saudi officials have repeatedly demanded that Iran halt its intervention in Syria and Iraq as well as its support for groups such as Lebanese militia Hezbollah and Houthi rebels in Yemen – demands Iran is unlikely to accept.

Read more: Playing both sides against the middle: Saudi Arabia engages with Iraqi…

Mr. Indyk’s description of Prince Mohammed’s endorsement of US engagement with Iran also contrasted with the Saudi official’s framing of his country’s rivalry with Iran in sectarian terms in an interview on Saudi television in May. Prince Mohammed asserted in the interview that there could be no dialogue with Iran because it was promoting Messianic Shiite doctrine.

Alghadeer, an Iraqi Shiite satellite television station broadcasting from the holy city of Najaf, earlier this month added to the confusion about Saudi Arabia and the UAE’s intentions with a report that the kingdom had asked Iraqi Prime Minister Haider Al-Abadi to mediate between Iran and the kingdom. Alghadeer quoted Iraqi interior minister Qasim al-Araji as saying that Iran had responded positively.

Mr. Ibrahimi warned that Iranian-backed Shite militias would not simply vanish once the fight against the Islamic State was over

Saudi Arabia’s official Saudi Press Agency denied the Alghadeer report and reiterated the kingdom’s hard line position that there could be no rapprochement with an Iran that propagates terrorism and extremism.

With the Islamic State on the ropes, Saudi Arabia’s reaching out to Iraqi and Iraqi Shiites amounted to a bid to counter Iranian influence and help Mr. Al-Abadi give the Sunni minority confidence that it has a place in a new Iraq.

The Saudi overtures also appeared designed to strengthen Shiite forces that seek to limit Iran’s influence. They also aimed to exploit the fact that a growing number of Shiite politicians and religious figures in Iraq were distancing themselves from Iran and could emerge strengthened from elections scheduled for next year.

The Saudi moves that also include the creation of a joint trade council and the opening of a border crossing that was closed for 27 years, could prove to be either a blessing or a curse for Iraq. They could turn Iraq into an area where Saudi Arabia and Iran find grounds for accommodation or they could exacerbate the situation with the rivalry between the two Middle Eastern powers spilling more forcefully into Iraqi politics.

Saudi moves that also include the creation of a joint trade council and the opening of a border crossing that was closed for 27 years, could prove to be either a blessing or a curse for Iraq

Jamal Jaafar Ibrahimi, better known by his nom de guerre, Abu Mahdi al-Muhandis, a Shiite paramilitary commander and one of Iran’s closest Iraqi allies who has been designated by the US Treasury as a terrorist, suggested recently that Iran intended to stand its ground in Iraq. Mr. Ibrahimi warned that Iranian-backed Shite militias would not simply vanish once the fight against the Islamic State was over, even if the government ordered them to disband.

In a further move that could cut both ways, Saudi Arabia has asked Iraq for permission to open a consulate in Najaf. The Saudi request, as well as visits the kingdom and the UAE by controversial Iraqi Shiite scholar and politician Muqtada al-Sadr for talks with the two countries crown princes, signalled not only a willingness to forge relations with Iraqi Shiites but also a desire to play a role in Shiite politics.

Saudi Arabia would be opening its consulate at a time that Najaf’s foremost resident, Sayyed Ali Hosseini Sistani, one of Shiite Islam’s most prominent leaders and a proponent of an Iraqi civil rather than a religious state, is, like his counterpart in the Islamic Republic, Supreme Guide Ayatollah Ali Khamenei, growing in age. Najaf and Iran’s holy city of Qom competes as Shiite Islam’s two most important seats of learning.

Mr. Al-Sadr, long a critic of Saudi Arabia’s hard line towards its own Shiite minority, has also sought to counter the rise of sectarianism and criticized the Iranian-sponsored militias fighting the Islamic State alongside the Iraqi army as well as Iran’s backing of Syrian President Bashar al-Assad.

Mr. Al-Sadr’s insistence that his discussions in Saudi Arabia and the UAE focused on Iraq, Iran, Yemen and Syria rather than the plight of Saudi Shiites was validated by the fact that his visit coincided with a three months-long, brutal crackdown on Shiite insurgents in the town of Awamiyah in the kingdom’s Eastern Province and the razing of its 400-year old Musawara neighbourhood, a hotbed of anti-government protest. The visit also came as Saudi Arabia planned to execute 14 Shiites accused of attacking security forces in 2011 and 2012.

Read more: Qatar scores, at least on the soccer pitch

Saudi Arabia, in a further gesture to Shiites, referred a popular cleric, Ali Al Rabieei, to the copyright infractions committee for “violating the press and publications law” as part of a crackdown on hate speech. Mr. Al-Rabieei was summoned for describing Shiites as “rejectionists” because they allegedly reject the first three successors to the Prophet Mohammed, and denying that Shiites were Muslims – concepts that enjoy currency among Sunni Muslim ultra-conservatives.

Amid the fog of contradictory moves, Iraq is emerging as a bell weather of the next phase in the Saudi-Iranian rivalry that has complicated, if not exacerbated, the Middle East’s multiple conflicts. It could prove to be the chink in a covert and overt proxy war that has so far offered few, if any, openings for a reduction of tensions. By the same token, Iraq could emerge yet another battlefield that perpetuates debilitating sectarianism and seemingly endless bloodshed across the Middle East and North Africa.

Another juvenile maid becomes victim of abuse and torture