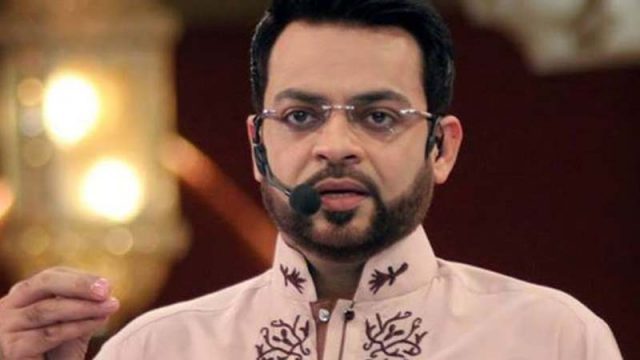 The Supreme Court of Pakistan has rejected the apology rendered by Pakistan Tehreek-e-Insaf (PTI) leader and Member of National assembly Dr. Amir Liaquat Hussain. The apology was rendered before a three-judge bench headed by Chief Justice Mian Saqib Nisar by the respondent’s counsel. The CJP not only rejected the apology but also directed the legal counsel of Mr. Hussain to ask him to appear in person before the court.

The court has already announced that Dr. Hussain will be indicted in a contempt of court case initiated against him for violating earlier undertakings not to use hate speech or derogatory language against individuals, including media persons.

It is worth mentioning here that on 11th September during a hearing of the case the CJP was extremely unhappy to watch some video clips played in the courtroom. Dr. Hussain was seen inciting violence and using derogatory language against TV anchor Shahzeb Khanzada, Independent Media Corporation (Pvt) Ltd, Mir Ibrahim-ur-Rehman and Najam Aziz Sethi.

“One cannot go about apologizing after committing contempt of court,” Justice Nisar observed. He questioned whether a lawmaker can remain a member of National Assembly after being indicted in a contempt case. “They cannot [remain an MNA],” replied Shahab Sarki, the counsel for Hussain.

According to details, the Pakistan Electronic Media Regulatory Authority (Pemra) has issued 13 orders and also banned Mr. Hussain several times but he never stopped repeating abusive language against his rivals.

The SC issued contempt of court notice to the leader of PTI leader allegedly for his abusive language. Dr. Hussain has “accused Geo TV anchor Shahzeb Khanzada of supporting blasphemy convicts,” the court was told on August 10th.

The CJP noted that such people [like Dr. Hussain] should not be in the parliament. “He also leveled grave allegations against Najam Sethi,” the counsel added. “No one has the right to call anyone infidel or traitor.”

Interestingly, PTI followers who voted for Dr. Hussain expressed their ‘anger’ on social media and conveyed PM Khan that it was his decision that they had to vote for a person like Dr. Hussain.

Dr. Hussain joined the PTI on March 19, 2018. He was, however, a critic of the PTI and its chairman in the past. He not only criticized the policies of the party but also attacked the personal life of Imran Khan. Dr. Hussain was also barred by the Islamabad High Court (IHC) in December 2017. Later on, the ban was lifted and the anchorperson was allowed to appear on TV screens.

As a matter of fact, Dr. Hussain has an old habit of blaming his opponents for some extralegal activities whenever he feels not comfortable with the organization. He worked with the GEO TV but at the end of the day, he accused Geo’s owner of being an Indian agent and working against Pakistan.

Later on, he himself did not stand up with the allegations he had leveled. Recently, he left Bol TV and in the same fashion accused the channel of carrying out some objectionable policies and activities. Later on, he again joined the channel.

Aamir Liaquat Hussain, a son of politician Sheikh Liaquat Hussain and renowned columnist Mahmooda Sultana, contested his maiden electoral battle in 2002 on the ticket of Muttahida Qaumi Movement from NA-249 Karachi-XI constituency. He was also appointed as the minister of state for Religious affairs and Zakat and Usher Division in September 2004 in Shaukat Aziz cabinet.

The apology was rendered before a three-judge bench headed by Chief Justice Mian Saqib Nisar by the respondent’s counsel.

But in 2007 because of severe violation of party rules Mr. Husain was forced to resign from his seat as a member of the national assembly and as Minister of State for Religious Affairs. He quit politics in 2007. MQM also expelled him from the party in 2008. Although Mr. Hussain had joined MQM again yet he parted ways with the party after an anti-Pakistan speech made by the party head Altaf Hussain in 2016.

In 2018, Dr. Hussain joined the PTI and termed his decision as ‘his final destination’. He was also given the party ticket to contest elections from NA-225 (Karachi). Dr. Hussain managed to win the elections mainly because of PTI’s stronghold in the city. Interestingly, PTI followers who voted for Dr. Hussain expressed their ‘anger’ on social media and conveyed PM Khan that it was his decision that they had to vote for a person like Dr. Hussain.

Analysts opine that the court is seemingly all set to punish Mr. Hussain for his derogatory language against the apex institution. His disqualification will, however, not impact the government of PTI, argue experts in Pakistan.