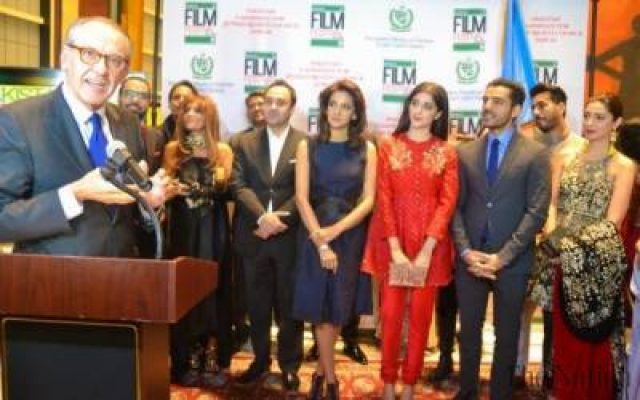 The second edition of the Pakistan Film Festival, organized by Pakistan’s Mission to the UN will take place in New York from 7-8 July 2018, featuring top stars from the country’s movie industry.

Several of the latest films from Pakistan will be shown during the two-day festival at the prestigious Asia Society. The films that will be screened during the festival include, Na Band Na Baraati, Punjab Nahi Jaongi, Cake, Verna, 7 Din Mohabat In, Parchi, and Lala Begum.

Oscar award winner Sharmeen Obaid Chinoy will also participate in the festival in a special segment titled ‘Beyond the Oscars’, in which she will discuss her present and future work as well as challenges faced by Pakistan’s film industry. Her animated film, 3 Bahadur was screened during the First Film Festival in New York in December 2016.

Among the galaxy of actors and stars who are expected to participate in the Festival are Mahira Khan, Mikaal Zulfiqar, Sheharyar Munawwar, Aamina Sheikh, Hareem Farooqi, Zeb Bangesh and Mehwish Hayat.

Apart from these celebrities a number of movie directors and producers will also attend the Festival including Mehreen Jabbar and Nadeem Baig.

An enthusiastic advocate of promoting the soft image of Pakistan through cultural diplomacy, Pakistan’s Ambassador to the UN, Maleeha Lodhi organized the first ever Pakistan film festival in the US in December 2016 in New York. The second Festival is part of her continued efforts to project the country’s soft power.

“Pakistan’s movie industry has continued to evolve, having gone through an exciting revival, and we are proud to present another edition of the Film Festival in the Big Apple”, Ambassador Lodhi said while talking about the upcoming festival.

She said a new generation of film makers in Pakistan have spearheaded the rebirth of cinema in the country and are producing incredibly diverse and entertaining films. “They are contributing to the cultural renaissance underway in the country which is also reflected in the profusion of creative voices found today in Pakistan’s art, music, literature and the media,” she added.

By showcasing Pakistani movies in the festival, the Pakistan Mission hopes to provide an opportunity to diplomats from 193 countries at the UN to see what the country’s entertainment industry is producing.

Read more: Saat Din Mohabbat In is proving to be one of the biggest hits of the year

The festival will be followed by a reception on 9 June at the United Nations where Ambassadors, UN officials and media representatives accredited to the UN will be invited, as well as members of the Pakistani diaspora.

Since assuming charge as Pakistan’s Permanent Representative to UN, Ambassador Lodhi has undertaken several cultural projects and organized a series of events to promote Pakistan’s soft image and highlight its modern and vibrant culture as well its ancient civilizational roots.

“Cultural diplomacy is a vital part of any diplomat’s job which is aimed at winning hearts and minds”, Ambassador Lodhi said, adding that Pakistan has much to offer the world in this regard, and our responsibility is to ensure that this is projected in the international arena.

“All the dynamism and diversity found in our films will be on display in the movies that will be shown during this Festival”, Ambassador Lodhi said, and hoped that this edition would prove to be as successful as the first one.