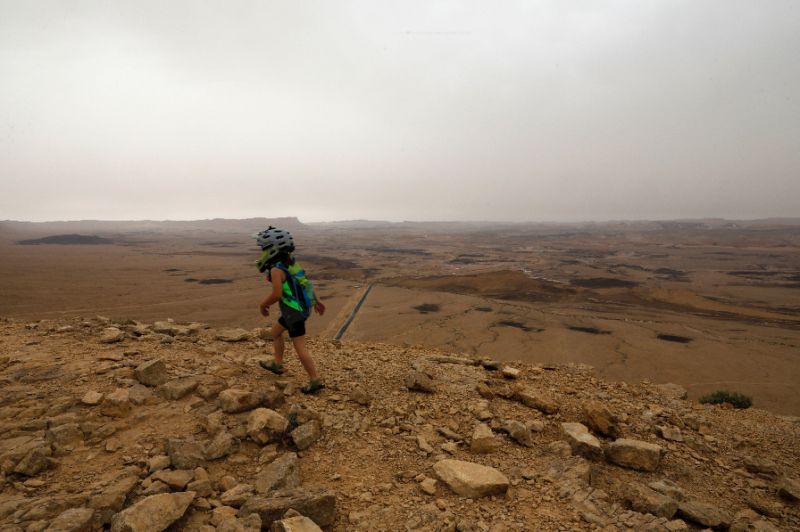 Israel has already been credited with making the desert bloom. Now it hopes to make it boom — with tourists.

In addition, a new international airport is rising from the desert floor 18 kilometres (11 miles) from the Israeli Red Sea resort of Eilat and the neighbouring Jordanian port of Aqaba.

Arrivals to the country of about eight million citizens hit a record 3.6 million last year, the Israeli tourism ministry said. The United States, Russia, France, Germany and Britain accounted for most of the visitors.

The ministry says that it now seeks to grow the Negev’s share of total Israeli tourist revenue from the present five percent to 20 percent within two to three years. It also aims to increase the number of Negev hotel rooms from 2,000 to about 5,000 within six to seven years.

– Desert on your doorstep –

Israel is marketing the desert as a unique destination on Europe’s doorstep.

“When it’s very cold in Europe, let’s say in December, January and February, we have very mild temperatures in the Negev,” the tourism ministry’s Uri Sharon told journalists on a tour of the sparsely populated region.

Activities include hiking, biking, rock climbing, abseiling and dune surfing — akin to snowboarding on the sand. The Negev is also home to a geological marvel: the Ramon Crater, the world’s largest erosion crater.

“In an emergency, not only will Israel’s entire passenger air fleet be able to land and park there, but also additional aircraft,” he said.

Salaam El Wadj has opened up the encampment where he lives with his wife, children and goats to visitors, who can stay in one of the tents and listen to his stories of Bedouin life.”I was born here in the Negev hills,” he tells his visitors over strong, sweet tea.

Wadj relates how the arrival a century ago of British and French administrators and, in 1948, officials of the new state of Israel, brought a drive for modernisation that disrupted and threatened the nomadic Bedouin way of life.

Hosting tourists, he said, enables him to preserve his heritage.”They don’t want to just sleep in a Bedouin camp but also to learn,” he said.

Hikers can walk along part of the Negev Highland Trail, covering about 12 km a day between Bedouin camps while their luggage is transported by vehicle.

– Wines in the wilderness –

It also aims to increase the number of Negev hotel rooms from 2,000 to about 5,000 within six to seven years.

Eyal supplements his income by offering tourist accommodation in cabins and group tours to surrounding sites of interest rather than industrialising his winemaking. Visitors can help run the production line and bottle, cork and label their choice of wine personally.

“All the time there are tourists from all over the world coming to the Israeli desert to explore, trek, taste our wine, go to other farms to taste goat cheese,” he said.”The Negev is a very safe and accessible desert and it’s warm here.”

Read more: Time to end foreign aid to Israel (and everyone else)

The vines grow in a natural basin, watered in winter by runoff from the surrounding hills and augmented with a modern irrigation system fed by desalinated seawater piped from the Mediterranean coast.

Not far from Carmey Avdat is the town of Mitzpe Ramon, which stands at the edge of the Ramon Crater.

There, travellers after tranquillity with a luxurious twist can go “glamping” — glamour camping — in luxury tents with hot showers and a personal chef. When inky night falls over the crater’s floor, there is the option of gazing through high-powered telescopes at the stars shining brightly in the unpolluted sky.

The Negev’s heart is only about a two-hour drive from Israel’s main international airport near Tel Aviv.

The new Ramon Airport will bring jumbo jets from around the globe to the desert itself. Its website says that it will be able to initially handle up to two million passengers annually, but will be able to expand to a capacity of 4.2 million by 2030.

Low-cost and charter airlines currently flying to Ovda airport, about 60 km away from Eilat, will move to Ramon, it says. They include Ryanair, Wizz Air, EasyJet, SAS, Finnair and Ural Airlines.

Construction began in May 2013.

Israeli media say that the airport is expected to start operations this autumn, in time for the November-May winter tourist season, but the Israel Airports Authority (IAA) is making no official forecasts.

The IAA says the original specifications for the project were revised in light of lessons learned during the 2014 Gaza war. After a rocket fired by Hamas militants in Gaza hit near the perimeter of Tel Aviv’s Ben Gurion International Airport, international carriers suspended flights.

IAA spokesman Ofer Lefler told AFP that the revised plans for the Ramon airport will allow it to serve as a backup in addition to boosting tourism.”In an emergency, not only will Israel’s entire passenger air fleet be able to land and park there, but also additional aircraft,” he said.

Amna Tauhidi - 21 September 2021
According to Amna Tauhidi, Social media have become powerful tools for propaganda as the internet is unprecedentedly accessible for each individual, and interactive social networking sites provide a strong platform for debate and sharing opinions and has the power to cause unrest.