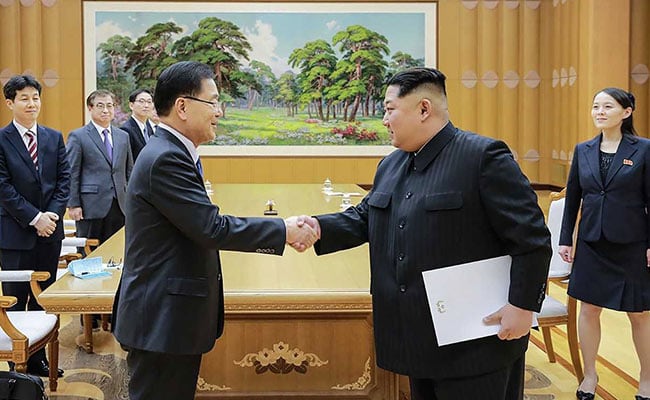 North and South Korea will hold their third summit Friday, stirring hopes of peace following years of tensions over the North’s nuclear and missile tests. The North’s leader Kim Jong Un will meet the South’s President Moon Jae-in on the southern side of the border truce village of Panmunjom, ahead of a summit with US President Donald Trump expected in the coming weeks.

Friday’s meeting comes after tensions soared last year as the North made rapid progress on its banned nuclear weapons programmes, while Trump engaged in an increasingly bellicose verbal scrap with Pyongyang’s leader.North and South previously held summits in Pyongyang in 2000 and 2007.Here are some key moments in the decades-long standoff between the two Koreas:

War but no peace

The US and Soviet Union agreed to divide the Korea between them in the days after Japan’s surrender ended the Second World War and its rule over the peninsula.In June 1950 the Communist North invaded the capitalist South, sparking a brutal war that killed millions of people.

Pyongyang remained defiant, last year carrying out its sixth nuclear test, its biggest by far, and launching missiles capable of reaching the US.Kim has since declared the country a nuclear power.

Beijing backed Pyongyang in the three-year conflict, while Washington threw its support behind the South — alliances that have largely endured. The two sides fought each other to a stalemate and hostilities ceased in 1953 with an armistice rather than a formal peace treaty, leaving them technically still at war.

Sending in the Assassins

Pyongyang has tested the ceasefire with numerous attacks.It sent 31 commandos to Seoul in a botched attempt to assassinate then-President Park Chung-Hee in 1968. All but two were killed.In the “axe murder incident” of 1976, North Korean soldiers attacked a work party trying to chop down a tree inside the Demilitarized Zone, leaving two US army officers dead.

Pyongyang launched perhaps its most audacious assassination attempt in Myanmar in 1983, killing 21 people in a bomb blast in a Yangon mausoleum, but visiting South Korean general-turned-president Chun Doo-hwan survived.In 1987 a bomb on a Korean Air flight exploded over the Andaman Sea, killing all 115 people on board. Seoul accused Pyongyang, which denied involvement.

The North’s founder Kim Il Sung died in 1994, but under his son Kim Jong Il it continued to prod its southern neighbour.In 1996 a North Korean submarine on a spying mission ran aground off the eastern South Korean port of Gangneung, sparking a 45-day manhunt that ended with 24 crew members and infiltrators killed.A clash between South and North Korean naval ships in 1999 left some 50 Northern soldiers dead.

The South’s first liberal president for decades, Kim Dae-Jung, instituted a “Sunshine Policy” of engaging with the North, and went to Pyongyang in 2000 for the first inter-Korean summit since the Korean War, earning himself the Nobel peace prize.

The North’s leader Kim Jong Un will meet the South’s President Moon Jae-in on the southern side of the border truce village of Panmunjom, ahead of a summit with US President Donald Trump expected in the coming weeks.

Read more: North Korea’s nuclear declaration: what it does and does not mean

Kim’s liberal successor Roh Moo-hyun went back to Pyongyang in 2007 towards the end of his term, but the North had already carried out its first nuclear test and after conservative Lee Myung-bak was sworn in the following year Seoul took a harder line against Pyongyang.

The Mount Kumgang trips came to an end when a visitor was shot dead for entering a forbidden area, and in March 2010 Seoul accused Pyongyang of torpedoing one of its corvette warships, killing 46 sailors — an allegation the North denies.

That November the North attacked a civilian-populated area for the first time since the war, firing 170 artillery shells at Yeonpyeong island. Four people were killed, including two civilians.

North Korea has steadfastly pursued its banned nuclear and ballistic missile programmes, seeking to build a rocket capable of delivering a warhead to the US mainland, with progress accelerating under Kim Jong Un, who inherited power in 2011.

In the “axe murder incident” of 1976, North Korean soldiers attacked a work party trying to chop down a tree inside the Demilitarized Zone, leaving two US army officers dead.

In response, the UN Security Council, US, EU and South Korea all imposed increasingly tough sanctions on the North, with the Kaesong industrial zone shut down in 2016. Pyongyang remained defiant, last year carrying out its sixth nuclear test, its biggest by far, and launching missiles capable of reaching the US.Kim has since declared the country a nuclear power

Following years of tensions, the South’s election of the pro-engagement Moon Jae-in as president and its hosting of the Winter Olympics gave the neighbours a window to reopen communications.At the opening ceremony the two Koreas marched together and Moon shared historic handshakes with Kim’s sister Kim Yo Jong and the North’s ceremonial president Kim Yong Nam.

The Koreas later agreed to hold Friday’s summit, and Trump accepted Kim’s invitation — relayed by Southern envoys — to meet.At the weekend the North declared a moratorium on nuclear tests and intercontinental missile launches, in an announcement immediately welcomed by Trump as “very good news”.

G7 ministers criticize US tariffs and warn of trade war

US free Economy:’Substantial progress’ made on massive China trade deal