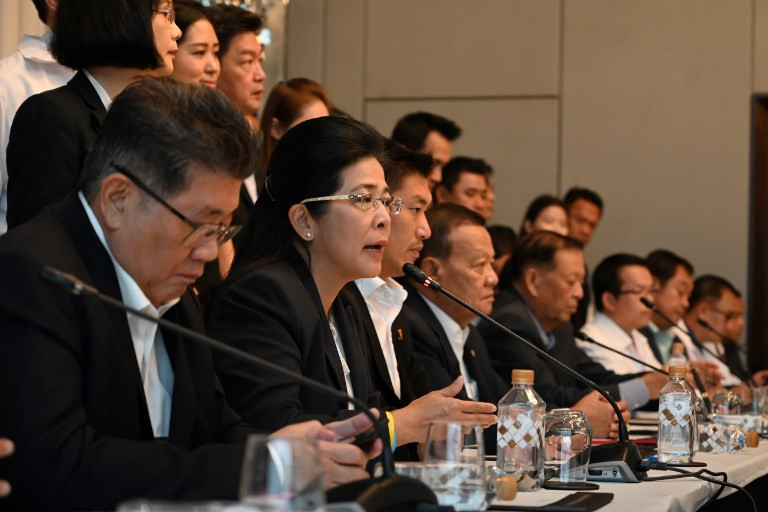 Seven political parties formed a coalition in Thailand on Wednesday, vowing to thwart a military-backed proxy in a bid to end years of junta rule following the country’s first election since a 2014 coup.

A junta-aligned party and its main rival have both claimed the right to govern the country after Sunday’s vote, prompting a political standoff. Questions over irregularities are swirling following invalidated ballots and accusations of skewed numbers.

A small protest was held outside its party headquarters Wednesday, led by activist Ekachai Hongkangwan who cautioned potential allies from joining forces with Phalang Pracharat.

“Pro-democracy parties received the most trust and consensus by the people,” she added, conceding that final results have not yet been released. Thailand has been ruled by a junta since a 2014 putsch led by General Prayut Chan-O-Cha, the prime ministerial candidate for the Phalang Pracharat Party.

But Phalang Pracharat stunned the pro-democracy camp by winning the popular vote on Sunday with 7.6 million ballots, according to preliminary results. It’s main rival Pheu Thai got 400,000 fewer votes but is now aiming to take the majority of seats in the lower house with its newly-formed coalition.

The seven-party bloc claimed it would take 255 out of the 500 lower house seats that are up for grabs, but with all official results yet to be confirmed the numbers are not ironclad. A clearer picture of the lower house could emerge as early as Friday when more comprehensive figures are expected to be released. But the party still cannot elect a prime minister without commanding more than half or 376 of all 750 seats in the combined lower and upper houses.

The balance of power is stacked in the junta’s favour thanks to a charter it drafted creating 250 military-appointed upper house seats. That means non-military parties like Pheu Thai need an avalanche of votes in order to elect a prime minister.

The coalition formed Wednesday does not include two other high-profile parties Bhumjaithai and the Democrat Party which together have around 70 seats so far and whose allegiances are still up for grabs. Phalang Pracharat is expected to seek its own allied bloc.

Sunday’s election had been repeatedly delayed and was seen as a test for Thailand’s tattered democracy, which has seen at least 12 coups since 1932. Phalang Pracharat did better than expected by clinching the most popular votes, and the junta-backed party dismissed the coalition’s claim to be the democratic choice.

“We are calling for the Election Commission to perform its duty in a free and fair manner,” the party’s telegenic billionaire leader Thanathorn Juangroongruangkit said Wednesday after joining the coalition.

“Please stop using ‘democratic front’ because in this election, no matter how many votes each party receives, everyone enters the election democratically,” the party’s secretary general Sontirat Sontijirawong told reporters. Its leader said the party was confident but was waiting to see how many seats it would get.

A small protest was held outside its party headquarters Wednesday, led by activist Ekachai Hongkangwan who cautioned potential allies from joining forces with Phalang Pracharat. “I don’t want any snakes to enter the party,” he said, throwing reptile repellant on the ground for effect.

Despite the coalition efforts to create a united front, it will be almost impossible for them to get the votes they need to elect a prime minister, said Aaron Connelly, Singapore-based research fellow at the Institute for International and Strategic Studies.

They “seem to be laying down a marker, claiming the legitimacy to oppose the junta in the next parliament”, he told AFP. Initial results have been plagued by controversy after the Election Commission unexpectedly said it would delay the final count.

The head of Future Forward, a newly-formed party that targeted first-time millennial voters, urged a swift tally of votes across the country. “We are calling for the Election Commission to perform its duty in a free and fair manner,” the party’s telegenic billionaire leader Thanathorn Juangroongruangkit said Wednesday after joining the coalition.

Previous articleIslamophobia: An age-old smoldering volcano
Next articleModi criticized for his theatrics & timing of ASAT launch

Pakistanis are crying because of rising inflation , Nawaz Sharif

Edward Snowden will publish a memoir: How the US spies on the world