The great Khans of Bollywood were slammed on social media for rubbing shoulders with PM Modi in a event organised to commemorate Gandhi. 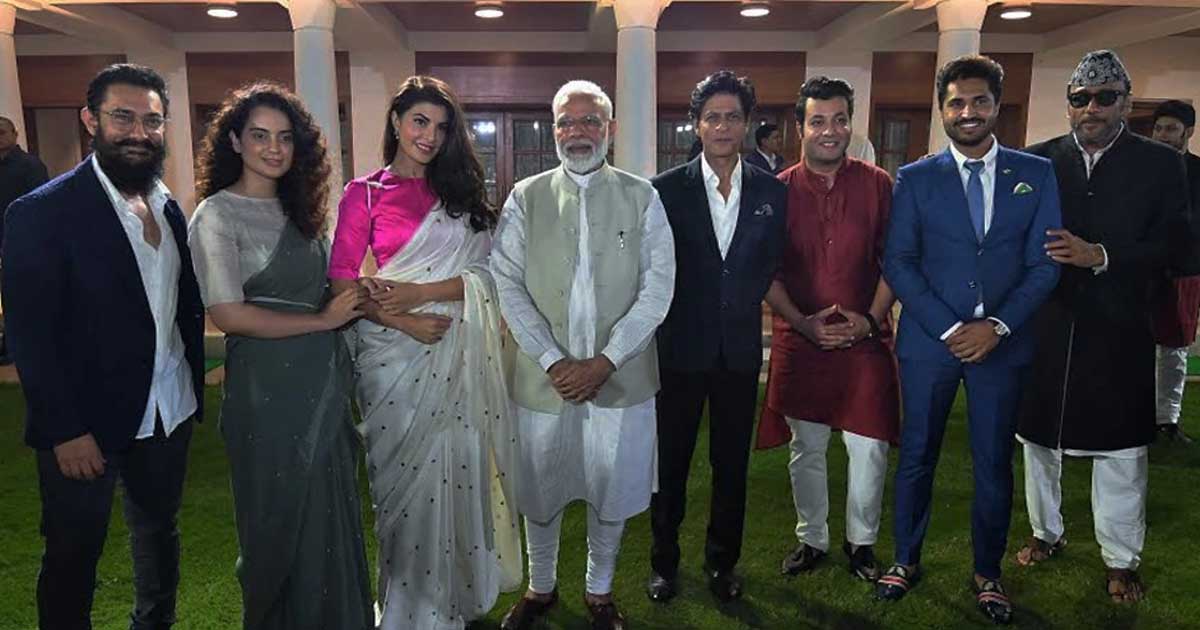 It was a wonderful interaction, says @aamir_khan.

A great way to involve everyone, says @iamsrk.

Thank u @narendramodi for hosting us & having such an open discussion on #ChangeWithin & the role artistes can play in spreading awareness of the msgs of The Mahatma. Also the idea of a University of Cinema is extremely opportune! pic.twitter.com/kWRbNk3xzo

Actors Aamir Khan and Shah Rukh Khan even clicked a selfie with PM Modi and posted on their respective Twitter accounts. The selfie of the Bollywood actors stoked reactions on social media. A score of netizens expressed disillusionment on Bollywood celebrities flaunting the meeting with PM Modi.

According to other details of the meetup, Prime Minister Narendra Modi had discussed the inception of a Cinema University with the Bollywood fraternity. He also discussed with Shah Rukh Khan and Aamir Khan the prospective of using cinema for the effective propagation of Indian narrative globally.

Following the event, Shah Rukh, @iamsrk, posted: “Thank you @narendramodi for hosting us and having such an open discussion on #ChangeWithin and the role artists can play in spreading awareness of the messages of The Mahatma. Also, the idea of a University of Cinema is extremely opportune!”

When every citizen works Dil Se, the outcome will be exceptional.

We will leave no stone unturned to carry forward the message of Bapu in letter and spirit. @iamsrk https://t.co/L0G38kKRvr

Happy to have met you Varun. Best wishes for your future endeavours. @varunsharma90 https://t.co/uJRn0x0UAv

Modi also tweeted a video of Amir and Shah Rukh form the event and wrote: “It was a wonderful interaction, says @aamir_khan. A great way to involve everyone, says @iamsrk. Two top film personalities talk about the meeting with PM @narendramodi. Watch this one…”

“Gandhi is synonymous with simplicity. His thoughts reverberate far and wide. The power of creativity is immense, and it is essential to harness this spirit of creativity for our nation. Several people from the world of films and television have been doing great work when it comes to popularizing the ideals of Mahatma Gandhi,” Modi said during his address.

While addressing the event Shah Rukh Khan expressed his gratitude to PM Khan for gathering the Bollywood fraternity for a national cause. Adding that, “I feel we need to re-introduce Gandhi Ji to India and the world. The film industry can get self-obsessed and it is important we create work that is not only about business,” said Shah Rukh. He stressed that there is a need to come forward and make films on Gandhi that can help in the nation-building process.

Amir Khan also addressed the ceremony said that “It was a wonderful interaction we had with the Prime Minister today. He was very inspiring, very warm and very deep in what he had to say. I want to appreciate the PM for thinking about this effort. As creative people, there is much we can do, and I assure the PM that we will do even more.”

The social media users flaked Bollywood actors for posting photos with PM Modi who is supporting an extremist campaign against Muslims across India and in Indian Occupied Kashmir.

A Social media user recalled that a few years ago Aamir Khan felt India is swiftly growing intolerant while, now, he is appearing in pictures with the man who is responsible for inciting hate crimes against Muslims and other ethnic minorities in India.

I have scoffed at, condescended to, and lectured people for so much as uttering a word about Bollywood. It is low art. It is an assault on one's intelligence and refinement.

It is also a vehicle for India's colonial project in Kashmir, its rabid jingoism, and Hindutva fascism. pic.twitter.com/BDTzokNDGs

US promises to consider India in Afghan withdrawal