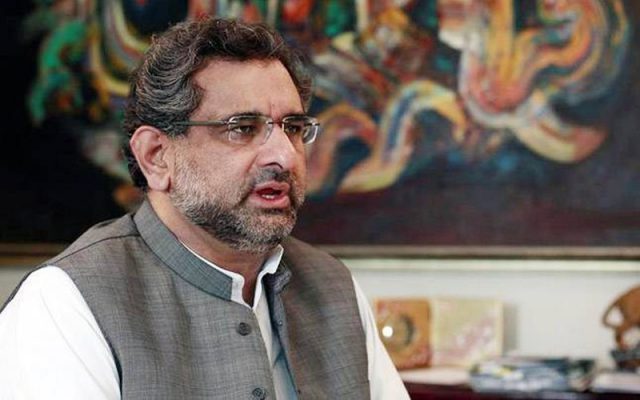 In an interesting development, an appellate tribunal at the Rawalpindi bench of the Lahore High Court (LHC) on Friday issued its detailed verdict on the barring of former Prime Minister Shahid Khaqan Abbasi from contesting elections from his native NA-57 (Murree) constituency in the July 25 polls. The verdict maintains that the former PM is neither honest nor truthful and, therefore, does not deserve to be a member of the parliament.

It is worth mentioning here that the LHC had suspended the verdict of the tribunal and allowed Mr. Abbasi to contest the general elections 2018. According to the details, the appellate election tribunal has disqualified the Pakistan Muslim League-Nawaz leader Shahid Khaqan Abbasi for “concealing facts and withholding information from voters” in his nomination forms submitted for NA-57 Murree.

The petitioner was referring to the controversial, allegedly anti-Pakistan interview of the ousted PM Nawaz Sharif to daily Dawn. Nawaz accused Pakistan’s security agencies of harboring terrorists and allow them to attack innocent people living on the other side of the border.

Justice Ibad-Ur-Rehman Lodhi of the Lahore High Court (LHC) declared him (Abbasi) not to be ‘Sadiq’ and ‘Ameen’ [truthful and trustworthy], the tribunal said Abbasi was “not a qualified person to be elected or chosen as a member of Majlis-e-Shoora (parliament) within the meaning of Article 62(1)(f) of the Constitution of Pakistan.” According to the verdict, Abbasi has been found “guilty of concealment of facts and withholding of the complete information from his voters”.

While elaborating on the decision, the appellate tribunal’s judge had stated that Abbasi had declared the value of his house in Islamabad to be Rs0.3 million but put it under mortgage against an amount of Rs24.7 million. He also noted the discrepancies in two affidavits submitted by Abbasi as one had mentioned shares in Air Blue and Blue Pines Inn Murree, “after interpolation”, while the other did not.

Petitioner Masood Ahmed Abbasi had challenged Khaqan Abbasi’s candidature and accused him of extorting money from the national exchequer. The petitioner had alleged that during his tenure as the prime minister, Abbasi had obtained “Rs1 billion from the national kitty and given the amount to his son to perform Umrah”.

Moreover, the petitioner had stated that the former premier had supported a controversial interview that Nawaz Sharif had given, accusing him of purposefully damaging national security. The petitioner was referring to the controversial, allegedly anti-Pakistan interview of the ousted PM Nawaz Sharif to daily Dawn. Nawaz accused Pakistan’s security agencies of harboring terrorists and allow them to attack innocent people living on the other side of the border.

Read more: Abbasi back in action: LHC clears him to contest elections from…

Among other accusations, the petitioner had alleged that Abbasi did not provide correct details of his assets. He further said that the former prime minister had not given any statement in support of Aafia Siddiqui a Pakistani scientist imprisoned in the US on terrorism charges. Interestingly, in today’s verdict, the judge stated that the suspension would continue, and directed the Election Commission of Pakistan (ECP) to appoint a new RO for NA-57, where by-elections are to be held in October.