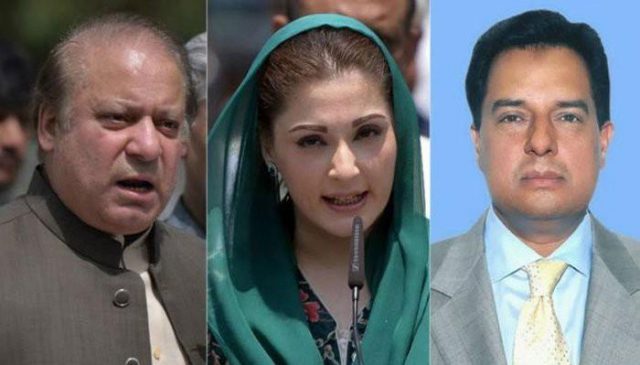 Former Prime Minister Nawaz Sharif, his daughter and son-in-law have filed appeals before the Islamabad High Court (IHC) and challenged the decision of the accountability court in Avenfield reference. Recently, an accountability court awarded total 11 years imprisonment to Nawaz Sharif, 7 and 1 year to Maryam Nawaz and her Husband Captain Retired Safdar respectively in a much-awaited decision on July 6.

The ousted Prime Minister Nawaz Sharif was sentenced to 10 years imprisonment under NAB ordinance Section 9(a)(v), which relates to owning assets disproportionate to known sources of income. Nawaz’s counsel Khawaja Haris filed an appeal challenging the verdict against his client and requesting its suspension till IHC’s adjudication in the case. Similarly, Amjad Pervaiz filed the appeals on behalf of Maryam and Safdar.

An additional appeal was also filed requesting the court to transfer the Al-Azizia and Flagship Investment references against Nawaz from the court of Accountability Judge-I Mohammad Bashir to another accountability court.

Nawaz’s anti-establishment and anti-judiciary narrative gave some reasons to the conspiracy theorists in and outside Pakistan to develop a nexus between the intelligence agencies and the superior courts in the country.

The appeals filed by the Sharif family have chiefly pointed out some flaws in the verdict penned by accountability court Judge Muhammad Bashir. It states that the Panamagate Joint Investigation Team (JIT) head and prosecution’s star witness Wajid Zia himself accepted that a response to the mutual legal assistance (MLA) request was not received.

It further said that levelling allegations without receiving a response to the MLA was mala fide. Moreover, the judge has mainly relied on, argue the Sharif legal counsel, assumptions and self-serving inferences, not on substantial evidence.

Legal counsels of the convicts have contended that the prosecution’s witness Robert Radley not only stated that Calibri font was available for testing purposes, he admitted to having downloaded and used the Calibri font which was available as pre-release of Windows Vista known as BETA-1 since the year 2005 while simultaneously admitting that he was neither a computer expert nor an IT expert or a computer geek.

An additional appeal was also filed requesting the court to transfer the Al-Azizia and Flagship Investment references against Nawaz from the court of Accountability Judge-I Mohammad Bashir to another accountability court.

He also hoped that his client will surely get some relief very soon. “Our case is very strong and on merit. We are right and we hope to get some relief,” he said. According to media reports, the IHC will hear the case on Thursday.

Read more: Verdict in Avenfield reference to be announced on July 6; challenges…

Mohammad Bashir, the accountability court judge who sentenced Nawaz Sharif and others in the Avenfield properties reference, has recused himself from hearing the other two corruption references against the former premier and his family. According to sources, the IHC had received a letter from the judge recusing himself from hearing Al-Azizia and Flagship references against Nawaz Sharif and his family.

They said that Justice Bashir, in his letter, requested for transfer of cases to another court. Furthermore, he stated that he had announced the verdict of Avenfield properties case and could not hear Al-Azizia and Flagship references. Justice Bashir further stated that if required, then he could also be transferred.

Read more: Convicts in Avenfield reference to be arrested upon arrival: NAB

Nawaz Sharif who has been the Prime Minster of Pakistan for three times has badly damaged the repute of courts amongst his supporters. After the Panama Papers verdict, Nawaz has been on fire to prove himself to be a revolutionary. Nawaz’s anti-establishment and anti-judiciary narrative gave some reasons to the conspiracy theorists in and outside Pakistan to develop a nexus between the intelligence agencies and the superior courts in the country.

This is now making the upcoming general elections in Pakistan compromised and highly controversial. If the upcoming elections become controversial, Pakistan will have to wait some more years to become a genuine representative democracy where all institutions work in their given domain to maintain political stability.