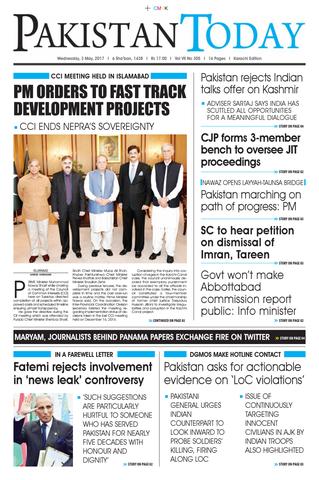 The Chief Justice of the Supreme Court, Justice Saqib Nisar on Thursday, while expressing concerns over continuing criticism on the judiciary over the Panama Case said that it would not mar its stature.

While hearing the disqualification petition of Chairman Pakistan Tehreek-e-Insaf(PTI) and Secretary General Jahangir Tareen, Justice Nisar said that the barrage of criticism will not compel judges to work dishonestly. He also stated that the court was showing extreme patience to the comments against it being said outside.

He lamented that such a reproach (outright castigation) does not suit those who uphold law and the constitution.“What could be a higher position than the one they are holding now? Why would they be unfair in their work?” he asked.

Pakistan’s flamboyant Foreign Minister, Khawaja Asif had said that Nawaz was ousted because he wanted to improve ties with India.

This was the first response by the judiciary after getting criticized by the Pakistan Muslim League(PML-N) and former Prime Minister, Nawaz Sharif over the verdict on Sharif’s review petition.

Jolted on the same day by the review judgment and the rejection of an important plea by the accountability court, Sharif said on Wednesday:” This grudge, anger, and words will become a dark chapter of history.” He went on to criticize the Supreme Court and said that the judiciary has written many dark chapters throughout the country’s history, and that this decision is one of them.

This was followed by a press release issued by the PML-N which took serious note of the “language used in the detailed verdict was also not up to the judicial standards.”

Experts are concerned that Sharif, despite opposition within his own party is all set to confront the organs of the state. They believe that the conspiracy narrative is being whipped up as part of last-ditched efforts to rescue the Sharif family from troubled waters.

The disqualification petition of Chairman Pakistan Tehreek-e-Insaf(PTI) and Secretary  General Jahangir Tareen, Justice Nisar said that the barrage of criticism will not compel judges to work dishonestly.

Detractors of the judiciary, include prominent lawyer and human rights activist, Asma Jahangir who asserted that the judiciary is working on the whims of the establishment. Ms. Jahangir, known for her outright criticism of the military said that Sharif was not ousted due to dishonesty and the Supreme Court must stop fooling the nation.

Commentators critical of the judiciary have pointed out that it is working with anti-democratic forces; they believe that such an impression is created because the courts have failed to chase General Musharraf. Also, they assert that Nawaz was singled out and targeted.Pakistan’s flamboyant Foreign Minister, Khawaja Asif had said that Nawaz was ousted because he wanted to improve ties with India. People sympathetic with Nawaz are certain that “ the boys from Rawalpindi” call the shots, ably supported by the jurists sitting in the Supreme Court. However, opposition leaders from PPP cite that Sharjeel Memon is being dealt a tougher hand. PTI are crying foul that Supreme Court may end up being unfairly harsh on Jahangir Tareen and Imran Khan to show its fairness across the parties.

As TikTok videos take hold with teens, parents scramble to keep up

Chorus of condemnation intensifies in U.S. over trade tariff