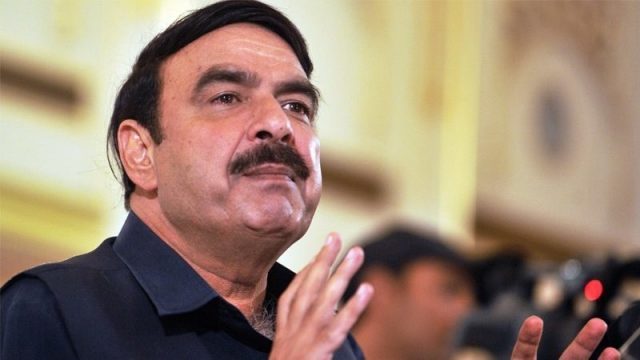 Minister of Railways Sheikh Rasheed got involved in a dispute with local traders after a traffic warden knocked over parked motorcycles to clear a path for the minister’s vehicle on Monday, 27th August. The incident that took place in Rawalpindi’s Bohra bazaar, which is situated on the road leading to Lal Haveli, led a top traffic police official to suspend the warden.

During the dispute, the minister reportedly said that as he was a minister, he could remove the “encroachments” if he wanted to. The traders retorted that they also wanted the encroachments to be removed; however, they haven’t been removed as yet. Locals later protested against the warden damaging private property in the area and also blocked the road.

Railway Minister’s decision to auction off the railway guest houses is also being termed as a terrible decision. In the austerity drive that promises welfare, selling off assets instead of making them profitable is being criticized all across the media platforms.

In retrospect of a contrary event, a senior railway officer was removed from his position following what he termed a humiliation at the hands of the railway minister. During a board meeting, the minister of railways Sheikh Rasheed allegedly bashed his officers for bringing up the previous railway Minister’s achievements. This upset the bureaucrats including a 20-grade officer Hanif Gul who was the Commercial Manager.

Mr. Gul put up an application for leave and expressed that the new Minister’s behavior was non-professional and humiliating. The application made rounds on the social media and brought a lot of heat for the railways Minister for his apparent lack of disregard and unprofessionalism.

Sheikh Rasheed, in his first few days as Minister for Railways, has been in hot waters for another controversy as well. The AML Chief had posted a video of himself traveling in a parlor train which was visually impressive. Since the condition of the train did not match his continuous rhetoric of the former railway minister having destroyed the ministry, he was bashed mercilessly on the social media, first and foremost by the former Minister of Railways Khwaja Saad Rafiq on Twitter.

Earlier this year in the previous regime, Pakistan Railway officers briefed publications that Pakistan Railways has replaced around 199 kilometers tracks during the last year on various sections of the railway network in the country for a smooth operation of trains. “The railway tracks on the network are being replaced under various Public Sector Development Programme (PSDP) projects,” official sources in the Ministry of Railways told a news agency, GVS reported.

They said that Pakistan Railways has also locked in arrangements for the upgradation and construction of more than 50,000 kilometers of tracks across the country on a build, operate and transfer (BOT) basis. In this regard, the railway’s ministry has invited Expressions of Interest (EoI) for the pre-qualification of contractors, after which 10 companies were selected through a bidding process, they added.

The BOT mechanism will resolve financing issues, which have remained one of the main hurdles in the way of implementing various projects, the sources had said. The current Railway Minister’s decision to auction off the railway guest houses is also being termed as a terrible decision. In the austerity drive that promises welfare, selling off assets instead of making them profitable is being criticized all across the media platforms.

Have Model Courts restored public confidence in the judiciary?

“Pakistan will not be bullied” – Lt. Gen. Tariq Khan