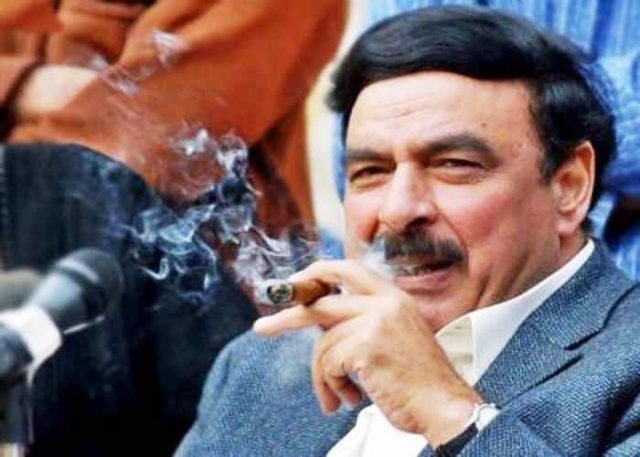 Awami Muslim League Chief and firebrand Sheikh Rashid Ahmed has predicted that soon a forward block will emerge within Pakistan Muslim League Nawaz in both center and Punjab. PTI’s high profile ally believes that number already favor Imran and he has emerged as a reality in the country and the forward block will consolidate Imran’s position even further.

Addressing a presser, Rashid claimed that Imran is in a position to finalize the formalities pertaining to government formation in next three days. The opposition will cooperate with the next government in a bid to elevate country out of this financial crisis. he asserted.

AML’s outspoken leader claimed that July 25 elections were the fair and transparent elections. He accused the parties crying foul over the rigging of habitually creating a fuss over the issue. Condemning the defeated bigwigs, Rashid argued that these leaders cannot live without power and are trying to make the elections controversial to make the way back into power corridors.

Referring to PTI chief stance to fully cooperate with the defeated candidates, if they have any apprehensions over the election results, Rashid assured that PTI is ready for a recount in all the constituencies where manipulation is suspected.  He reiterated that Imran will do all that may satisfy the opposition. However, he played down the emergence of a grand opposition alliance and predicted that it is doomed to fail for two reasons.

Firstly, all the defeated leaders, like Fazlur Rehman have spent forces and have no future in Pakistan’s politics. Secondly, all the top brass of the political elite is facing corruption-related investigations. In the run-up to general elections, PML-N leadership remained under NAB’s scanner. NAB has initiated inquiries against Nawaz Sharif, Shahbaz Sharif, Captain (retired) Safdar, Imran Ali, and Khawaja Saad Rafique. Similarly, among the PPP ranks, despite the acquittal of Asif Ali Zardari in NAB cases, FIA cases remain a potent threat.

PPP senior leaders including former PM and MNA-elect Raja Pervaiz Ashraf were under NAB’s radar. Ashraf is facing eight references in accountability courts including rental power plant case. However, in October last year, an inquiry against him was closed down. Similarly, another former PPP PM Yusuf Raza Gilani is facing accountability court on the illegal appointment of former chairman of Oil and Gas Regulatory Authority (Ogra)-Tauqir Sadiq. But, among the PTI team, other than Aleem Khan, no such threats are apparent to the top leadership. This is why Rashid was right to claim that it is the reality of new Pakistan.

Going forward, under the current wave of accountability which has started at a brisk pace, PTI remains the only party which is clean enough to overhaul the system without being blackmailed by tainted politicians. PTI has the mandate of the people after securing  16.8 million votes, which gives Imran liberty to reform and revamp the old system to bring Pakistan of current economic turmoil. But, forward block as predicted by Rashid is not an ethical way to strengthen the premiership. Imran must prove his credentials through his policies and decisiveness.

Previous articleThird APC in one week: opposition mulling over ways to counter Imran
Next articlePML-N may face another wave of disintegration in Punjab

25 September 2021
Previous articleThird APC in one week: opposition mulling over ways to counter Imran
Next articlePML-N may face another wave of disintegration in Punjab

Will Asad Umar come back into Imran Khan’s Cabinet?