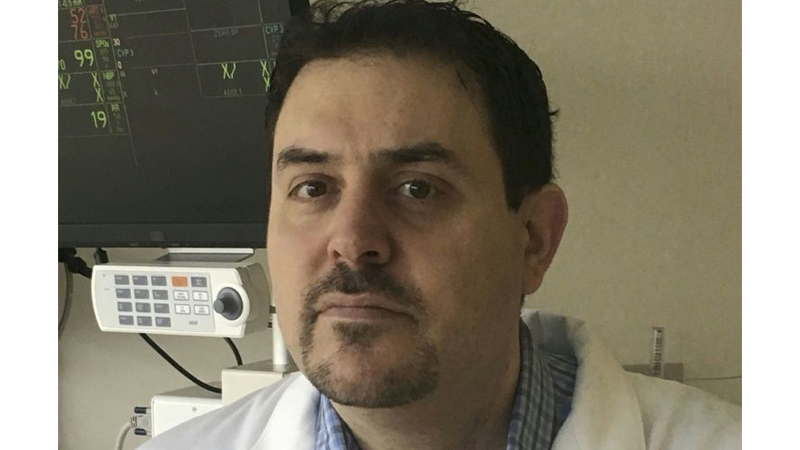 At age 17, Joseph Sakran was shot in the throat after a high school football game — a life-threatening injury that set him on the path to becoming a doctor. Now a trauma surgeon who fights to save shooting victims on the operating table, Sakran says gun violence in America is a health crisis that medical professionals can and should help address.

He has become the public face of a campaign to unite doctors, nurses and others who treat gun violence victims in an effort to reduce it, pushing back against the National Rifle Association (NRA) lobby’s assertion that the issue is none of their concern. “When you look at firearm-related violence… there’s no question that it is a public health crisis that we are facing in this country,” Sakran said at Johns Hopkins Hospital in Baltimore, where he is director of emergency general surgery.

Sakran, medical professionals have a unique perspective on gun violence from treating and caring for its victims and their families, one they can bring into the discussion.

The 41-year-old doctor said that firearms deaths should be approached like other major threats to health, such as smoking and obesity. “It falls under the injury prevention piece that we as clinicians and as scientists really consider as… part of our responsibility,” he said.

For Sakran — who said he has talked with “hundreds if not thousands” of gun owners, finding that “we actually have a lot more in common than we have that divides us” — the issue is not banning firearms. “In the ’60s and ’70s, when people were dying from motor vehicle crashes, we didn’t get rid of cars. We figured out, ‘How do we make cars safer?'”

This Is Our Lane

As someone who both survived a gunshot wound and treats them, Sakran was “a little bit incensed” when the NRA took aim at the involvement of doctors in the debate over gun violence. Firearms killed nearly 40,000 people in the US in 2017, according to the Centers for Disease Control and Prevention. And despite the scale of the problem, efforts to address it legislatively have long been largely deadlocked at the federal level.

“Someone should tell self-important anti-gun doctors to stay in their lane,” the NRA tweeted in November, calling out a particular medical journal for publishing what it deemed to be too many articles backing gun control. “I think there was a significant amount of outrage from the medical community — and not just non-gun owners but also gun owners — for a group to say that we are not part of the solution,” Sakran said.

Sakran says gun violence in America is a health crisis that medical professionals can and should help address.

He started the @ThisIsOurLane account on Twitter, which currently has over 28,000 followers. Sakran is one of the leaders of a campaign of the same name and has argued on social media, in print and on television that medical professionals are in fact “in their lane” when discussing gun violence.

This Is Our Lane has several aims: communicating about firearms violence, research, educating medical professionals about how to discuss issues such as safe gun storage with patients, and pushing for “common-sense legislation to be passed,” he said. And while it came about as a response to the NRA’s message, This Is Our Lane is ultimately “not about us versus them,” Sakran said.

“This is really about… working together to engage as Americans and ensure that we’re making communities safer.”

On the Front Line

Sakran’s journey to becoming a doctor began in 1994, when he was spending time with friends after the first football game of the high school season in Burke, Virginia. A fight broke out and Sakran saw a flash as someone opened fire, striking him in the neck and another person in the shoulder.

Firearms killed nearly 40,000 people in the US in 2017, according to the Centers for Disease Control and Prevention.

“I noticed very quickly that I must have been hit because I had a lot of blood all over me,” he said. He made it to the street curb and sat down, but was drenched in so much blood that it was difficult to determine where he had been shot. When his friends tried to lay him down, he started to choke. Sakran was brought to an area hospital, where a piece of vein was taken out of his leg to patch up his carotid artery.

He was hospitalized for weeks, required multiple operations and still bears scars on his neck from the surgery that saved him. “That moment really inspired me, inspired me to go into medicine, it inspired me to become a trauma surgeon,” Sakran said. He eventually returned to that same hospital as an emergency room technician and later as a medical student and a surgical resident, training with the same people who saved his life.

For Sakran, medical professionals have a unique perspective on gun violence from treating and caring for its victims and their families, one they can bring into the discussion.

“We’re on the front line of taking care of the patients that are being injured and brought into our trauma centers,” he said. “We see them in their most vulnerable and difficult times.”