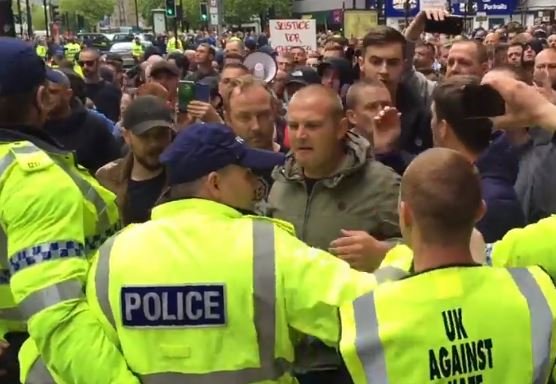 Thousands of Sikhs gathered in London on Sunday to commemorate the 1984 attack on the Holy Sikh site of Harmandir Sahib complex. Sikhs from all across the U.K traveled to London to attend the protest.

The protestors first gathered in Hyde Park and then conducted a march through central London to Trafalgar Square.

The 1984 attack on the Harmandir Sahib complex, or “Operation Blue Star”, was a violent clash between the Indian Army and Sikh separatist militants who had occupied the holy site of Akhal Takht inside the Harmandir Sahib complex. The separatists were led by Jarnail Singh Bhindranwale, head of the Damdami Taksal separatist organization. Bhindranwale and other Sikh leaders called for a separate Sikh homeland, Khalistan, for the Sikh people which they said would act as a buffer state between Pakistan and India.

Read More: The untouchables’ revolt in India: Will the Brahmins suppress the Dalits…

Every year Sikhs across the world commemorate the violent incident and demand recognition of the slaughter as genocide conducted by the state of India.

After separatists occupied the Holy Temple, Indira Gandhi, Prime Minister at the time, had considered Bhindranwale as an important political ally but after he turned against her, she ordered the Indian Army to launch an operation and flush out the militants from the Harmandir complex.

The ensuing battle between the militants and the Indian army lasted for 10 days, from June 1st to June 10th. The clash resulted in the death of 83 Indian army soldiers with 249 injured. Official reports put forward by the Indian government put the civilian and militant deaths to around 500 but human rights groups have posted significantly higher numbers.

In the aftermath of the operation, there was crackdown across Punjab on Sikh separatists and scores of innocent civilians are said to have been killed by Indian paramilitary forces. on 31st October 1984, Indira Gandhi was assassinated by her Sikh bodyguards at her residence in New Delhi in retaliation to Operation Blue Star.

Every year Sikhs across the world commemorate the violent incident and demand recognition of the slaughter as genocide conducted by the state of India.

Read More: Killing people in the name of meat-politics in India?

The movement in the U.K gained renewed intensity after the shocking disclosure of U.K’s involvement in the 1984 massacre came to light

The protest held in London is part of a decade’s long struggle of the Sikh people to secure an independent state.

Sikhs argue that under the right of self-determination secured in international law, the Sikh people should be allowed to form the separate homeland of Khalistan.

The community is also attempting to lobby the five permanent members of the UN Security Council for an inquiry into the genocide conducted by the Indian state following the events of Operation Blue Star.

The movement in the U.K gained renewed intensity after the shocking disclosure of U.K’s involvement in the 1984 massacre came to light. It was revealed that the British government had played an advisory role in Operation Blue Star, but despite protests and pressure from the community, no details have yet come to light.

IMF bailout on the cards for Pakistan’s next government: analysts