Sino-Pak Relations: Our Economic Prowess is the Key 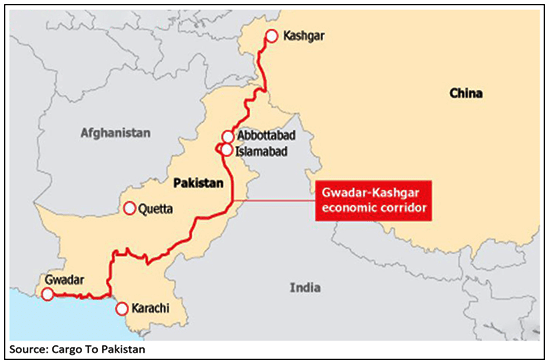 In the autumn of 1793, George Macartney, the leader of the first British diplomatic mission to China, met Chinese Qianlong Emperor. The envoy presented the objectives of their mission – the opening of new ports for British trade, the establishment of a permanent embassy, the cession of a small unfortified island for British use along China’s coast, and the relaxation of the restrictions on trade between Britain and China. The Emperor flatly turned down all requests.

It is important and equally interesting to explore the reasons that guided the Emperor to rejecting Macartney’s requests. Especially because it offers a significant insight into historical Chinese worldview that it held for the past two millennium. In his letter to the British monarch, King George III, the Qianlong Emperor addressed at length the reasons for refusing to honour the requests.

“You, O King ” reads Emperor’s letter, “impelled by your humble desire to partake of the benefits of our civilisation, you have dispatched a mission respectfully bearing your memorial……Our Celestial Empire possesses all things in prolific abundance and lacks no product within its own borders. There, therefore, re no need to import the manufactures of outside barbarians in exchange for our own produce.”

Pakistan is supposed to be the most steadfast and reliable partner in China-led economic order.

In short, the letter condemned European nations as barbarians and clearly signified in its text a subservient stature of the rest of the world.  The international system as we know it is ‘anarchic’, with no superior authority to control and shape states’ behavior. However, the worldview that China held was marked by anarchy’s structural opposite: hierarchy, with China constituting the center of gravity. The Sinocentric worldview of Chinese was enforced mainly by their material superabundance, China’s civilizational prominence, technological and military pre-eminence, tremendous demographic clout and its bureaucratic sophistication.

Read more: India thrilled over BRICS statement on terrorism, but Sino-Pak ties are…

Especially because of the dominant political philosophy, the Confucianism, of the Chinese the Emperor was embraced by the people as Son of Heaven, sitting at the top of the world (tianxia, literally “all under heaven”). Therefore, there was no display of the notion of reciprocal equality towards other nations among the Chinese.

Though failed to obtain its major objectives, the Macartney Mission demonstrates an opportunity missed by both sides. However, as supported by history, its drastic consequences was felt more by China. The inability of the Chinese leadership to recognize the changing dynamics of the outside world later heavily challenged the rule of Qing dynasty.

In subsequent years that followed, China encountered increasing foreign pressures and interventions from western powers and Japan and was subjected to imperialism, ultimately plunging it deep into an era of darkness that came to be known as a ‘Century of Humiliation’ that lasted until 1949, the year Mao established People’s Republic of China.

Trump’s recent visit, to comment to NYT: “China uses its money to buy off many leaders, but none of the countries that are its close allies, like North Korea, Pakistan, or Cambodia, have done well.”

China is, therefore, aware of the fatal and grave consequences of serious mistakes and miscalculations and knows that if repeated they would completely disrupt the normal and decent functioning of its society. It is obvious, therefore, that China in the conduct of its relations strictly honours the principle of sovereign equality of all states and strives at length to add strength and vitality in its relations with other countries.

As for Pakistan’s case, what’s more, interesting and enchanting is the way China affirms its relationship with Pakistan. China regards Pakistan as an “irreplaceable all weather friend”, and “most reliable friend” and that both are part of a community of shared destiny. Pakistanis might also remember the words of the current Chinese President Xi that he made use of to express his profound intimacy, love and closeness for Pakistan during his visit.

“I feel as if I am going to visit the home of my own brother”, said President Xi at his first-ever state visit to Pakistan. It is remarkably phenomenal language ever to be used in Chinese diplomatic history. In fact, it is unusual because it completely deviates from the tradition and the way the Chinese have historically been carrying out their international relations.

However, as the two nations are bound together by shared interests and geography and both countries deeply desire to cement their relationship, and as there are prospects that the relation might become one of the cornerstones of the international stability and order, it is important to analyse and understand the ‘current’ nature and dynamics of the relations.

And as there are always growing chances that Pakistan’s foreign policy might get distracted by underlining strategic and security aspects to the negligence of economic dimensions, the need to understand the key relationship becomes all the more important.

Pakistan needs to increase the capacity and effectiveness of its political and economic institutions to operate more skillfully. Otherwise, in the long run the future seems so bleak that even no amount of military preparedness could save us from maximizing our defects and minimizing our advantages.

China has successfully presided over more than three decades of its economic transformation which is so extraordinary that it can be regarded as the most remarkable phenomenon in the history of world industrialization. Starting in 1970 when the size of China’s economy was nearly 5% of the US’s, it is projected that global contribution (GDP) of China will surpass the US in 2018. Already, based on Purchasing Power Parity (PPP), China is rated as the world’s largest economy by both the IMF and the World Bank.

China’s ascent towards the global primacy was fueled further by the 2008 global economic recession. Along with severely damaging the western economies, the recession impeded their ability to contribute to and support international financial institutions. Resultantly, it placed an open question mark on performance and even relevance to the IMF and the WB.

It is no surprise then, therefore, that when assessed on their performance towards contributing to infrastructure development in developing countries, especially in Asia, the World Bank and the Asian Development Bank have widely failed to deliver, resulting into needs of trillions of dollars (approximately $8 trillion according to one estimate) for investment.

On the other hand, China’s economy continued to perform well, and in the face of severe financial crisis served as a stabilizing force for the world. As China escaped the global financial meltdown and as its economic activity remained less affected, the net result increasingly played into empowering China to emerge as an important architect of the global financial system (AIIB, BRI, BRICS Development Bank etc.).

For some, the increasing economic footprints of China on the globe might be an insight into how China plans to wield its power, however, it also shows that China is commendably serious about taking a leadership role in the global economy and prioritizing projects that broadly benefit Asia and the world.

Surely, these paradigms shifts are not going unnoticed among the US policymakers and therefore there are consistent calls for containing and balancing the rise of China. As strategic convergence between the US and India is growing and as the current US administration is placing increasing focus on Indo-Pacific, the environment signals fresh attempts at offshore balancing to contain China.

The envoy presented the objectives of their mission – the opening of new ports for British trade, the establishment of a permanent embassy, the cession of a small unfortified island for British use along China’s coast.

How far these would be successful is left to anyone’s guess. But here some facts are necessary to mention: that the US is already in a condition of comparative economic decline and failing to maintain a prudent balance between its economic and military expenditures; that though the US still has necessary allies abroad, at home, however, it is suffering from a complete lack of shrewd political leadership.

On the contrary, China has the wisdom to recognize its problems, the will to solve them, and, especially under President Xi, the kind of political skills that that can enable it to gradually emerge to global ascendancy.

And China is already winning: countries are finding they must increasingly operate in China’s economic orbit. As the rise of China and the decline of the US are coinciding, the rules of the game are changing. China’s-led multilateral institutions serve as important platforms (especially for China) to resolve issues that are otherwise difficult to settle in bilateral arrangements. Also, they are indeed powerful instruments for China to increasingly lend legitimacy to its international advances and to extend its sphere of economic and political influence.

What’s disturbing in Pakistan’s case is that there is appalling political and economic mismanagement. Amidst this atmosphere, there are some voices so tinctured in strategic notions that they carry the risk of ‘overwhelmingly’ drifting Pakistan towards less-desired and less-pragmatic configuration: giving primacy to geostrategic notions over geo-economic ones. Take one commentary published in a prestigious newspaper of Pakistan goes on arguing that “China’s only strategic and military ‘partner’ now is Pakistan”. What’s more disturbing is the way the author tries to sketch the strategic environment of Asia completely in terms of conventional alliance structure system.

For decades, Pakistan has endlessly and unwisely been putting an overwhelming emphasis, utterly in narrow terms, on strategic and security needs. And for decades, our leaders have been failing to play the excellent cards history placed in our hands.

And it was under this impression that led Vietnam’s Maj. Gen. Le Van Cuong, during Trump’s recent visit, to comment to NYT: “China uses its money to buy off many leaders, but none of the countries that are its close allies, like North Korea, Pakistan, or Cambodia, have done well.” (Though there are no reasonable grounds to submit to this flawed judgement, but…)

Pakistan is supposed to be the most steadfast and reliable partner in China-led economic order. To the realization of that end, therefore, Pakistan needs to enhance its infrastructure, institutions and their performance significantly. We must work to create a political culture that remains committed to the idea of Pakistan becoming a prime center for trade and economy activities.

For Pakistan, these are defining moments. Never before we have such a paramount urgency to focus on national economic health. It is not to suggest that Pakistan needs to disregard the continued importance of military power. The point is, however, that Pakistan needs to increase the capacity and effectiveness of its political and economic institutions to operate more skillfully. Otherwise, in the long run, the future seems so bleak that even no amount of military preparedness could save us from maximizing our defects and minimizing our advantages.

Nargis Fakhri is rooting for the Peshawar Zalmi