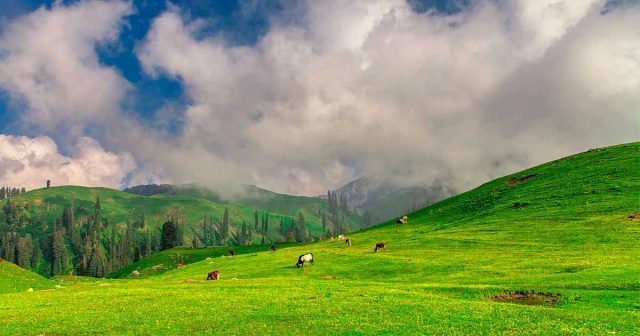 Siri Paye is a heavily guarded meadow up north, unlike the Galiyat, Siri Paye is not easy to access. Steep mountains, a narrow steep road, rocky landslide, and winter snow has kept Siri Paye tucked away preserved in its natural beauty.

The picturesque Siri Paye is located near Kaghan Valley, near the equally beautiful hill station of Shogran. Siri Paye is a high mountain lake at an elevation of 3.058m (10,032ft) above the sea level, located in the Khyber-Pakhtunkhwa province of Pakistan. A crystal fresh water lake is situated right in the center of the meadow. Animals grazing the field, wild yellow and lilac flowers adorn the meadow, Siri Paye is rounded by Makra Peak, Malika Parbat, Musa ka Musala.

Shogran is accessible through jeeps from Kiwai, tourist try to take their cars up to Shogran often returning in vain. Besides one wouldn’t want to ruin their cars just to escape spending a few thousand rupees. Jeeps are heavily available at Kiwai, where you can park your personal vehicles at a rented parking and rent the jeeps to take you up to Shogran. The locals driving the jeeps have developed the expertise to drive along the slippery, narrow steep road even with their “eyes closed”, as our driver had claimed. The jeeps used for tourist business in the area were originally assembled for Pakistan’s army in 1970’s and later auctioned to private individuals.

It takes around 40 minutes to reach Shogran, the jeep ride is exhilarating hence one doesn’t gets bored in those 40 minutes. Shogran has a plethora of guest-houses, tiny hotels and cottages. Tourists can decide on either to rent a place in Shogran or directly go up to Siri Paye and rent a tent for a night in the meadow. Locals and hotel owners are way more cooperative than the ones you would find in Galiyat/Murree. Forest Guest-house is a popular and beautiful place to stay in Shogran, ousted PM Nawaz Sharif has been reported to have ordered its construction. If you decide to stay the night at Shogran, be warned the place is lit till 2 am with loud music that will certainly reach you through your doors. Tea/coffee vendors and Saji/BBQ vendors remain open till 2 am.

It takes a further 20 minutes to reach Siri Paye, the more you travel up, the steeper and narrower the road gets.  At one steep hilltop point you can spot Shogran while riding the jeep, you’ll be surprised how further up you have traveled. It will be a 3 hour hike from Shogran to Siri Paye, if you are feeling really adventurous.

Siri Paye is heavily coated in a snow blanket during the winters, while in summers, green grass and flowers adorn the meadow. An serene place to hike around, or if you are tired you can travel on horseback for a mere 200 rupees (GVS would recommend tourists to be more generous though). If you walk towards the hilly corners of the meadow you will find a local family living in a hand built rough cottage, who will offer to serve you home made organic traditional food. The animals grazing on the fields are not very fond of tourist hence it is recommended to keep a safe distance.

At a majestic height of 11200 feet the nearby Makra Peak boasts a dramatic scenery, indeed a heaven for nature photographers and would serve a picturesque backdrop for your social media pictures. Be careful if you have any breathing related health issues, as at a great height air level starts to “thin”. There are several myths that trace the origins of the meadow’s name, ‘Siri Paye’. However the most plausible explanation to the name would be, Sar meaning “lake” in Hindko, the a common language in Kaghan, as well as in Seraiki and Punjabi. While Paya in Hindko is a high grazing ground. At over 3000 meters above the sea, that is what Paya actually is.

Be sure to mark Shogran and Siri Paye as your next travel destination, the peaceful and serene environment would serve as a much needed break from the hustles and bustles of the city life.

India vs Pakistan: Clash of the titans

Who will win US Presidential elections 2020?