Despite being knocked down by detractors numerous times, Mahira Khan stood up and headed on her sparkling journey in Pakistan’s entertainment industry. She will certainly not pay heed to the dissension on her recent photoshoot

Actress Mahira Khan is garnering dissension on social media for her latest photoshoot, which according to netizens transgresses the cultural values of Pakistan.

Her seductive photos in western outfits circulated on social media that offended many people. Social media users commented that the actress must keep in mind she is in Pakistan and she has to follow certain boundaries despite being in the entertainment industry.

A video of Mahira Khan circulated on social media in which she is seen making sensual expression while posing for clicks.

Mahira Khan, who is often under the radar of extreme inspection by social media users, has not commented to the online backlash, and, perhaps she will never comment.

The actress, recently appeared in Pakistani film ‘Superstar’, was dissed by veteran actor Firdous Jamal for being ‘overrated’. Mahira Khan even confronted a torrent of abuse and spiteful comments after her private pictures of smoking a cigarette with Indian actor Ranbir Kapoor in the USA went viral on social media. 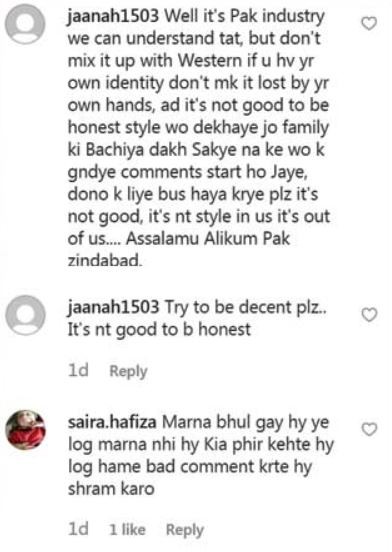 The Raees starlet Mahira Khan penned down a heartfelt note on social media after senior actor Firdous Jamal passed crass remarks against the actress at a morning show. Mahira Khan, however, remained sturdy in the face of offhand denunciation from an acclaimed actor.

Jamal’s comments of Mahira Khan, a ‘mediocre model’ and ‘too old to be a heroine’ incited a whirlwind of reactions on social media, a large number of Mahira’s advocates gathered on social media to express their support for her, which included her fans and insiders from the entertainment industry. However, it took a day or two for Mahira Khan to recollect herself to respond to critics.

Mahira Khan, in a note shared on social media, reiterated that she would continue her journey in the entertainment industry despite criticism. She also expressed gratitude to her fans for uplifting her spirit in the scenario.