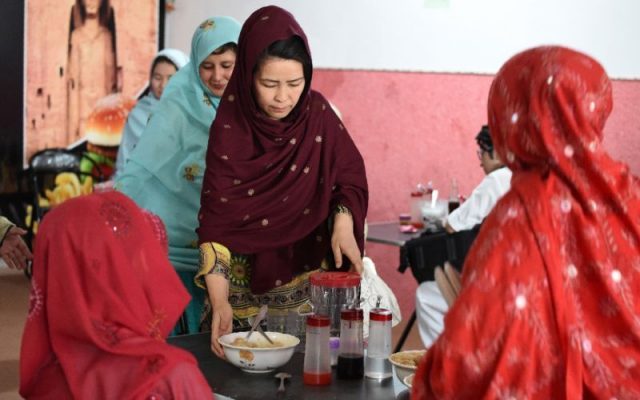 Working at “Hazara”, a restaurant in the Pakistani city of Quetta, is a potentially deadly political act: all of the greasy spoon’s employees are female members of a Shiite ethnic minority often targeted by extremists.  The outlet is named after the ethnic Hazara who make up a large part of Pakistan’s Shiite minority, which accounts for about 20 percent of the country’s 207-million Sunni-majority population.

The Hazara, whose Central Asian features make them easily recognisable, are a soft target for Sunni militants who consider them heretics.  The Shiite community’s presence is particularly strong in Quetta — the restive capital of impoverished Balochistan province — that also serves as the headquarters of the Afghan Taliban, and where sectarian attacks are frequent.

“It’s a good idea to support women in business,” he adds, detailing the menu: chicken and rice, hamburger and fries, salad, and sodas. But not everyone is of the same opinion.

The eatery is located in Hazara Town, one of two neighbourhoods in Quetta where the community is guarded by armed checkpoints.  The protection is necessary: Hazaras — who make up roughly 500,000 of the city’s 2.3 million population — are living practically under siege.

In October, three Hazara vegetable vendors who ventured outside their enclave were shot in the head at point-blank range, just the latest in a series of attacks targeting the group. They still live with the violent memory of two attacks in January and February 2013 that killed nearly 200 of its members.

Following the second, which hit a local market in Hazara Town, residents protested by refusing for several days to bury their dead — an emotional gesture in the Muslim world where the deceased must be buried on the same day or the next.

The events had a powerful effect on Hameeda Ali Hazara, a member of the local community, whose house adjoins the site of the first attack. “I told myself that I had to help the victims,” Hameeda tells AFP. She set up Hazara restaurant, which opened two months ago, hoping to provide a way to help families and female victims of sectarian attacks.

Cameras have also been installed as a security measure and in a bid to prevent harassment. “The atmosphere here is very quiet, anyone can come with their family,” says patron Pervaiz Ahmad, a local banker.

She has three employees who are all victims of violence, she said, including one who lost her husband during a bomb attack. According to Abdul Khaliq Hazara — chairman of the Hazara Democratic Party — between 1,500 and 2,000 members of the community have been murdered in Balochistan.

An additional 75,000 to 100,000 have fled violence elsewhere in the country or abroad with some “drowning at sea” before reaching their destination, he says.

To the difficulty of being Hazara is added that of being a woman in very conservative community. In Pakistan, women account for just 25 percent of the labour force, according to the latest figures from the International Labor Office.

Women’s employment drops to two percent in the service sector in Balochistan, a place that operates largely according to patriarchial tribal customs. The meagre incomes available to women generally come from home-made embroidery or small-scale trading at markets.

Read more: When and why terror groups synchronize or coordinate violent acts: Learning…

“Opportunities to start a business or join a company are rare” for them, said Hameeda. Her restaurant initiative also aims to push the staff to “seize work opportunities instead of staying home with a needle and thread”, she says.

The outlet is named after the ethnic Hazara who make up a large part of Pakistan’s Shiite minority, which accounts for about 20 percent of the country’s 207-million Sunni-majority population.

A chance that Masooma — a cook and waitress at the eatery as well as a student — grasps: “I work here to earn money for my family but also to pay my schooling.” “My family supports me in my decision to be employed here,” she insists.

To prevent inappropriate behaviour from customers unused to seeing women at work, Hameeda posted signs urging consumers to be “pleasant to waitresses and talk to them with due regard for moral values”.

Cameras have also been installed as a security measure and in a bid to prevent harassment. “The atmosphere here is very quiet, anyone can come with their family,” says patron Pervaiz Ahmad, a local banker.

“It’s a good idea to support women in business,” he adds, detailing the menu: chicken and rice, hamburger and fries, salad, and sodas. But not everyone is of the same opinion.

Hameeda said she has been harassed and threatened by those who brand her initiative a “disgrace” and a breach of “honour”. “I am continuously receiving threats on social media… and phone calls asking me to shut this restaurant because it is den of obscenity,” she says, adding that she has called on authorities to guarantee her security.

“Such things cannot discourage me,” she says. “I am the real face of my Hazara community and Balochistan.”

Sindh Minister threatens to shut Careem and Uber down in Karachi

Will Imran Khan Surrender Before Maulana? Will Prime Minister Resign?