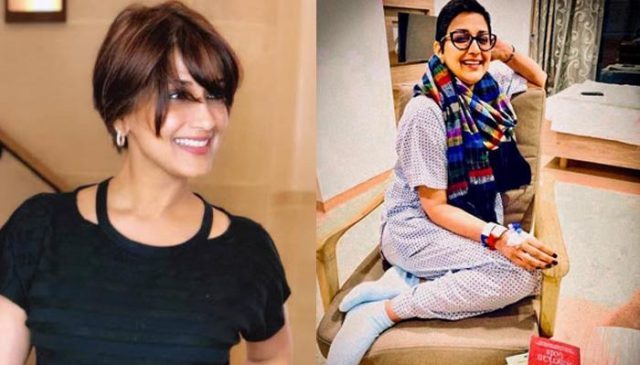 She informed that Sonali Bendre is gradually returning to normal life. “She is a strong girl. She looks amazingly fit and ready to get back to normal life. I had such a lovely time with her. We discussed so many things. She told me the entire story of her illness and what gives her the strength, and I told her that she’s always in my prayers”, said Namrata in her interview.

Shirodhkar also spoke about the bonding they both share. She said “Just like me, she’s so typically Maharashtrian in so many ways. We chatted about everything under the sun. We even laughed about some shared recollections of the past.”

Namrata Shirodhkar was on a family vacation to the USA when she visited Sonali Bendre. In the last couple of months, several Bollywood celebrities including Priyanka Chopra, Anupam Kher, Neetu Singh, and Suzanne Khan have met Sonali Bendre to boost her confidence to fight cancer.

Two  Bollywood celebrities, Sonali Bendre and Rishi Kapoor are in the USA for the treatment of their respective ailments. While Sonali is under treatment for cancer, Rishi Kapoor is yet to be diagnosed with the ailment. According to the Kapoor family, doctors are conducting tests to ascertain his ailment.

Sonali Bendre publicly spoke about her cancer in the month of July. Since then she has been under treatment, from time to time she shared her account of fighting a dreadful disease on her social media account.

Previous articleThe Haunting of Hill House: A series worth watching
Next articleAlhamra to pay tribute to Sepoy Maqbool Hussain on the instructions of Punjab’s Minister Chohan

31 July 2021
Previous articleThe Haunting of Hill House: A series worth watching
Next articleAlhamra to pay tribute to Sepoy Maqbool Hussain on the instructions of Punjab’s Minister Chohan