South Korea should give U.S. troops the boot- Part II 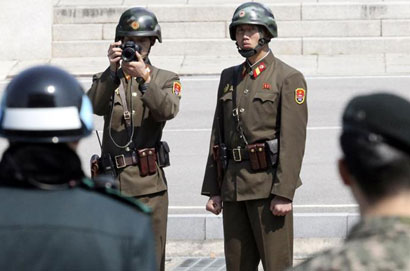 Last April, I wrote an article entitled “South Korea Should Give U.S. Troops the Boot,” in which I argued that if the South Koreans were smart, they would order all U.S. troops out of their country immediately. For those who have not read that article, I would recommend doing so because the reasoning I set forth there are even more valid today as war clouds loom ever darker.

Although the Pentagon and the CIA have succeeded in reinvigorating Cold War hostilities against Russia, most everyone today acknowledges that there is no international communist conspiracy based in Moscow to take over the United States and the rest of the world, which was the guiding principle of the Cold War.

Do yourselves, the United States, and the rest of the world a big favor: Just order U.S. troops and the CIA out of your country. Just tell them to go home before it’s too late

That of course was the rationale that the U.S. national-security establishment relied on for intervening in what was purely a civil war in Korea in the early 1950s. The Reds were coming to get us, the Pentagon and the CIA maintained, and the North Korean communist aggression against South Korea was just the first step in a communist takeover of the world.

But the fact is that the North Koreans were never coming to get America and turn it Red. For that matter, neither was North Vietnam. The Pentagon’s and CIA’s Cold War notion of an international communist conspiracy based in Moscow was a crock from the get-go, one that conveniently guaranteed ever-increasing budgets for the military-industrial complex and its army of contractors.

What about today? Today, there is no chance whatsoever that the North Koreans are coming to the United States to get us. North Korea is an impoverished Third World nation, one that has long suffered under a socialist economic system, which means it has no strong economic or industrial base. While it has a big domestic military establishment, much as the United States does, there is no military capability of crossing the Pacific Ocean, invading the United States, conquering the country, taking over the federal government, and turning America Red.

In fact, with the Pentagon and the CIA out of the way, the potential for their working toward peaceful reunification would significantly increase

Many Third World nations have learned that lesson the hard way. Examples: Iraq. Afghanistan. Grenada. Panama.The Philippines. In fact, the only reason that North Korea was able to fight the United States to a standstill in the Korean War is because China came to its assistance.

Given that there is no chance that North Korea is going to come and get us, the big question is: What are U.S. troops doing in South Korea? They’re certainly not over there defending our “rights and freedoms.”

The ostensible rationale is to protect South Korea in the event of an attack by North Korea. But the next big question is: Even if that’s true, why would the resumption of a civil war in Korea be the business of the U.S. government? Certainly, they couldn’t make their old Cold War claim that if South Korea falls, the rest of the dominoes will begin falling as well.

So, again, what are U.S. troops doing in South Korea?

Regime change. That’s been the core principle of the U.S. national-security state since its inception in the 1940s. Installing pro-U.S. regimes around the world. Iraq, Guatemala, Cuba, Chile, Brazil, Congo, Indonesia, Nicaragua, Vietnam, Grenada, Iraq, Afghanistan, Libya, Syria, Ukraine. The list goes on and on. When U.S. officials told North Korea that it is part of an “axis of evil,” they were implying the need to change its regime to a pro-U.S. one — that is, to a “good” regime.

That’s why North Korea wants nuclear weapons, not to initiate a war with the United States or South Korea but to deter the U.S. government from initiating one of its storied regime-change operations against North Korea.

There is nothing irrational about the North Korean position. Whether through assassination, coup, sanctions, or invasion, there are few things the Pentagon and the CIA would love more than to install a pro-U.S. regime in North Korea, even if it has to create a pretext to do so. Regime change in North Korea would enable the Pentagon and the CIA to place U.S. troops and U.S. missiles on China’s border, much like they aimed to do with their regime change in Ukraine, where they hoped to install U.S. troops and U.S. missiles on Russia’s border.

Read more: The real victors of the second world war

There will be the economic and financial fallout from the spending that comes with such wars and there will be ever-more acquisition of totalitarian-like powers, but the fact remain

Add to that longtime goal President Trump’s ever-growing domestic travails, most of which would be set aside in patriotic fervor in a war against communists, and you have the very real possibility of a nasty and deadly war in Korea.

And who will pay the price for that war? No, not the United States, at least not in bombs, artillery bombardments, missiles, and battles. The people who will pay the big price in terms of death and destruction are Koreans, both in the North and the South. North Koreans will be bombed by U.S. forces to smithereens, just as they were in the Korean War. But the South Koreans will also suffer enormous death and destruction. It’s even possible that the Japanese will bear some of the consequences of the war.

But like with all foreign wars in which the U.S. government is involved, America will be immune from the death and destruction. Oh sure, there will be the economic and financial fallout from the spending that comes with such wars and there will be an ever-more acquisition of totalitarian-like powers, but the fact remains No bombing, no artillery bombardments, no shooting, and no killing over here.

North Korea wants nuclear weapons, not to initiate a war with the United States but to deter the U.S. government from initiating one of its storied regime-change operations against North Korea

What South Koreans need to realize is that their welfare is of secondary importance to President Trump, the Pentagon, and the CIA. In their eyes, it’s America First and South Korea second. If these people decide that U.S. “national security” requires a war with North Korea, make no mistake about it: They are not going to seek South Korea’s permission and they’re not going to concern themselves with death and destruction in South Korea. In their minds, it will all be justified under the rubric of “national security” and “America First.”

That’s why the best thing South Koreans could ever do is to order the immediate withdrawal of all U.S. troops from South Korea. With the U.S. government no longer threatening regime change, North Korea would no longer have the incentive to acquire nuclear weapons. The possibility that North Korea would attack South Korea is minimal. In fact, with the Pentagon and the CIA out of the way, the potential for their working toward peaceful reunification would significantly increase.

South Koreans: Do yourselves, the United States, and the rest of the world a big favor:  Just order U.S. troops and the CIA out of your country. Just tell them to go home before it’s too late.

Tribute to my hero: Fidel Castro of Cuba