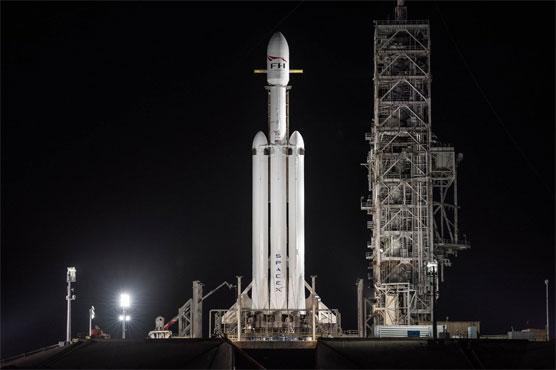 With less than a minute before launch Thursday, SpaceX aborted the liftoff of its new Falcon 9 Block 5 rocket, which the California-based company promises to be more powerful and easier to re-use.

The next launch opportunity at Cape Canaveral, Florida opens Friday, with a slightly more than two-hour window starting at the opening at 4:14 pm (2014 GMT) and ending at 6:21 pm.

“The vehicle and payload are in good health,” said a SpaceX spokesman. The company later tweeted: “Standing down today due to a standard ground system auto-abort at T-1 min.”

“Teams are working towards tomorrow’s backup launch opportunity,” it added. The rocket’s main goal for its maiden mission is to propel the first high-orbit communications satellite for Bangladesh, called Bangabandhu Satellite-1.

Eventually, the rocket is slated to launch humans to the International Space Station, aboard SpaceX’s Dragon crew capsule, still under development. The first crew launch is tentatively planned for December 2018.

When that happens, it will mark the first time since the end of the US space shuttle program in 2011 that a rocket has launched from the United States carrying people to space.

The Falcon 9 Block 5 rocket is built to re-fly up to 10 times with minimal refurbishment, SpaceX CEO Elon Musk told reporters ahead of the launch. “We expect there would be literally no action taken between flights, so just like aircraft,” Musk said.

“It has taken us — man, it’s been since 2002 — 16 years of extreme effort and many, many iterations, and thousands of small but important changes to get to where we think this is even possible,” he added.

The Block 5 rocket is the final upgrade for SpaceX’s Falcon 9 fleet. Next, the company plans to focus on its heavy-lift rocket, called BFR.

Obama reprimands Trump as unfit, calls on Americans to fight for US democracy

“We are not satisfied with your answer,” CJP tells Shehbaz Sharif