Sri Lanka bombings: The ugliest side of asymmetrical warfare 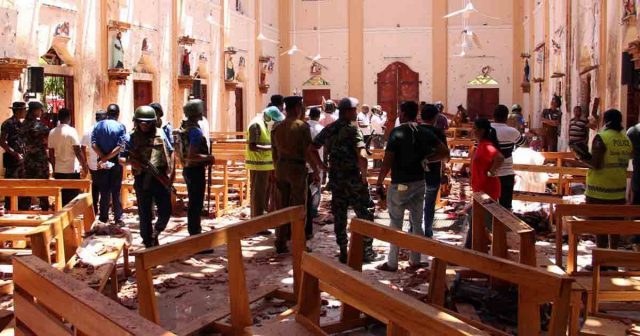 A series of highly coordinated bomb attacks on churches and hotels rattled Sri Lanka and rest of the world leaving nearly 200 dead and nearly a double wounded. The attacks were targeted at the Christians who had gathered in the churches to commemorate the resurrection of Jesus from the dead, also known as Easter Sunday. As per the most recent figure, the death toll includes nearly 35 foreigners as well hailing from multiple countries.

So far, no group has claimed any responsibility for the attacks however Sri Lankan law enforcement organizations have arrested 14 people linked to the bombings. Police also claims that vehicle used for the transportation of attackers and a safe house allegedly used to plan the attack has also been found.

Unfortunately, states have their own vested interest and insurgents groups are used for espionage and chaos, a phenomena most readily seen in Balochistan province.

The island nation of Sri Lanka has faced one of the longest civil war spanning over more than 25 years. There has been no development so far which would suggest that the bombings are linked to the remnants of the anti-government forces. Nevertheless, such a coordinated attack generally has deep motive as well as ample amount of time and resources spent on planning and execution.

Police was aarned about the attack

As per the initial report, a warning was issued from the office of Police Chiefs 10 days prior stating that there is a likelihood of an attack from Islamist insurgents. The intelligence was specific enough to point out that the likely target is ‘churches’ still no adequate measure were taken to prevent the tragedy from happening. So far, the surfaced intelligence report is the only connection between the bombings and alleged perpetrators, most likely ISIS-linked local group.

But as ISIS is known for taking credit for such terrorist attack a silence from Amaq News Agency is further raising the questions.  Any interesting revelation about the alert which was issued to the top police officials is that it came from a ‘foreign intelligence agency’. “A foreign intelligence agency has reported that the NTJ (National Thowheeth Jama’ath) is planning to carry out suicide attacks targeting prominent churches as well as the Indian high commission in Colombo,” said the alert.

Police also claims that vehicle used for the transportation of attackers and a safe house allegedly used to plan the attack has also been found.

The NTJ is a radical Muslim group in Sri Lanka that came to prominence only last year when the outfit was linked to several Buddhist statues being vandalized. But ostensibly there is a discrepancy in the motive if the said Islamic group is really involved in the incidents. The attacks follow a pattern of targeting Christian population, the lowest constituents of Sri Lankan population, while the recent communal standoffs in Sri Lanka had been between Buddhists and Muslims.

A foreign hand in the destabilization of Sri Lanka can also not be ruled out due to geo-strategic importance of Sri Lanka especially due to its close ties with China. But anything at this point cannot be conclusively said as it is developing stories and multiple angles will unfold in coming days.

Asymmetrical warfare is one of the most common phenomena faced but countries across the continents including Pakistan as well. Unfortunately, states have their own vested interest and insurgents groups are used for espionage and chaos, a phenomenon most readily seen in Balochistan province.

Unlike conventional war which was clearly defined objectives and rival forces, asymmetrical warfare is a never-ending affair. The enemy is never completely defeated and unlike conventional war there is no real end date. It stretches across boundaries with multiple actors involved at several levels. In order to deter the shared threat, increased intelligence sharing and international cooperation is a primary requirement.

Reforming the police in Pakistan: A Utopian Dream