“Sri Lanka’s struggle for peace and its lessons for Pakistan and the region”: Ex-President Sri Lanka, Mahinda Rajapaksa to speak in Islamabad 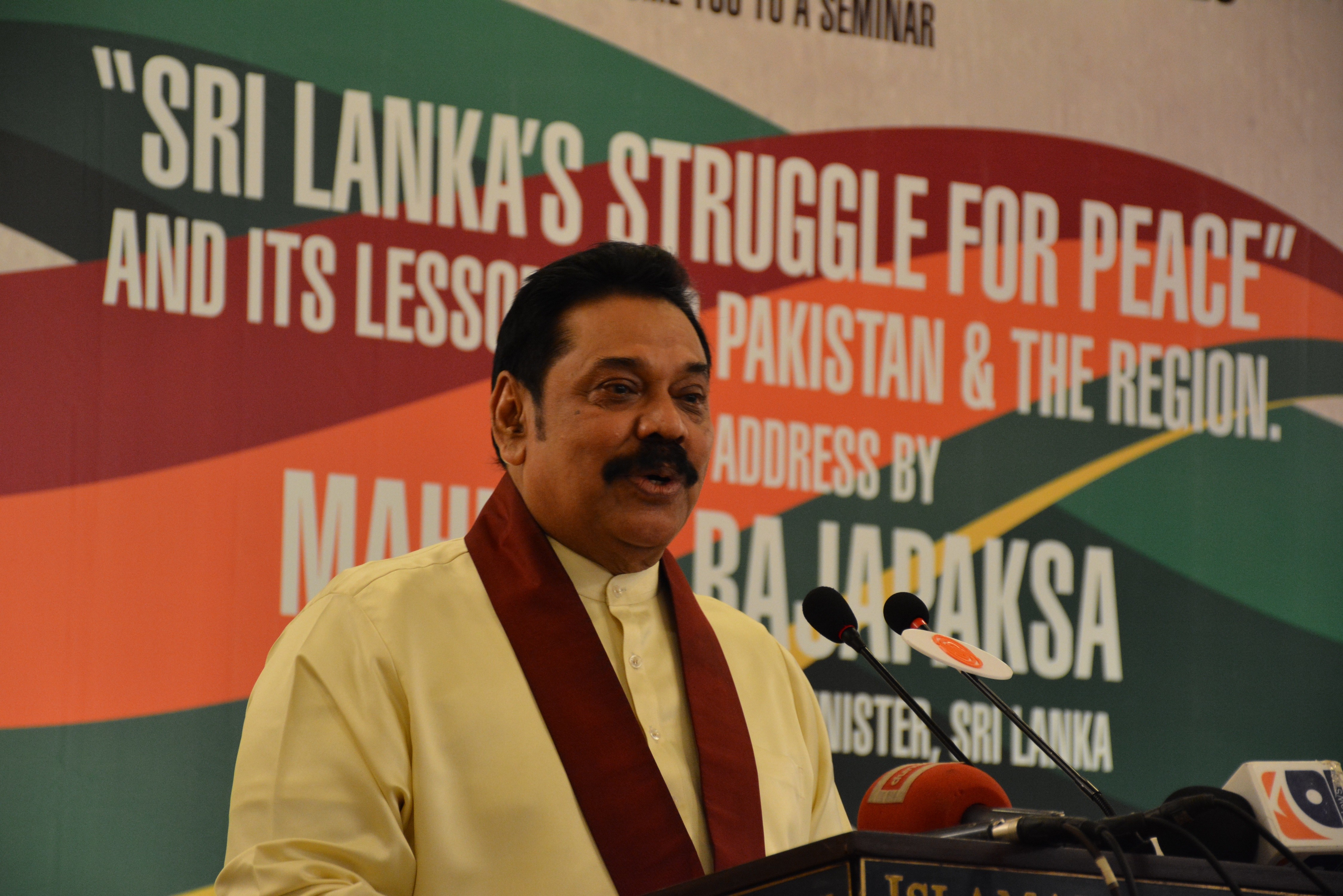 Ex-President & Prime Minister of Sri Lanka, Mahinda Rajapaksa, will be in Islamabad, between June 20 and June 22. He will be accompanied by a high-level delegation, including his ex-foreign minister, which will meet Pakistan’s civilian and military leadership to discuss matters of mutual importance; sources in Foreign Office confirm.

President Rajapaksa was Sri Lanka’s sixth President from 2005 till 2015; he created history in the South Asia region, through his difficult, often painful, but ultimately successful military and political campaign against a three-decade-old war, insurgency and terrorism by Tamil Tigers (LTTE) and led Sri Lanka to a path towards peace and economic recovery. However, there were serious accusations of use of excessive force, human right violations and even war crimes. This painful debate continues inside Sri Lanka and across the world. Sri Lankan government and experts have always accused their critics of hypocrisy; they accuse that that Tamir Tigers’s insurgency, despite open terrorism, enjoyed support from powers in the region, like India, and sympathy across western world.

Later in the evening on June 21, His Excellency, Mr. Mahinda Rajapaksa, will be speaking at a Seminar, “Sri Lanka’s Struggle for Peace & its lessons for Pakistan and the Region” jointly organized by Global Village Space (GVS) and Center for Research & Security Studies (CRSS) at Serena Hotel, Islamabad.

Rajapaksa, a professional lawyer, a lifetime parliamentarian who at different stages of his career served as minister, leader of the opposition and prime minister of Sri Lanka is an articulate speaker; he  does not mince any words in explaining the challenges he and his government faced once he decided to break the back of Tamil insurgency that had paralyed Sri Lanka’s economy and social order. It is believed that Pakistan, under Gen. Musharrraf, provided all out support to the Sri Lanka in its fight against violent insurgency and terrorism.

Attack on Sri Lankan cricket team, near Qaddafi Stadium, Lahore in March 2009 still remains shrouded in mystery. It was President Rajapaksa’s government that had taken the initiative to send the Sri Lankan cricket team to Pakistan to help end Indian imposed “Sporting Isolation” upon Pakistan. Islamist terrorists struck, Lahore police was unprepared despite intelligence warning of a possible attack, six Pakistani policemen died and seven members of the Sri Lankan team were injured. Pakistani bus driver despite being shot was able to drive Sri Lankan team to safety. But it was a watershed event that marked the completion of Pakistan’s isolation from international sports. Though Lahore police was never able to piece the bigger picture, but most in Pakistan remained convinced that Indian design stands behind the isolation of Pakistan from international cricket. Cricket is an important bridge between Pakistan and the world; it brings out country’s diversity, provides a regional connect (as picture of Indian cricketing star MS Dhoni holding child of Pakistani skipper, Sarfaraz Ahmed does) and helps break the monotony of international news coverage on Pakistan as the latest Pakistan victory against India in Champions Trophy,  final, on June 18, has demonstrated.

Many may like to ask President Rajapaksa as to who could have been behind attack on Sri Lankan team. Cricket fans and historians also remember how international cricket teams and sporting events were repeatedly attacked in Colombo, between 1987 and 1993, by Tamil Tigers forcing a suspension of international cricket; so there exists a well defined trajectory of some one using terrorism to force “sporting isolation”. Mr. Rajapaksa is scheduled to address a gathering of politicians, academics and military officials at the National Defense University, Islamabad on 21st June 2017. He will discuss Sri Lanka’s successful campaign against the Tamil Tigers and the role Pakistan played in Sri Lanka’s triumph against the insurgent group responsible for waging a protracted internal conflict spanning over several decades. Rajapaksa’s meeting with Prime Minister Nawaz Sharif is also expected.

The session will be chaired by Pakistan’s Ex-Defense Secretary, Gen. Asif Yaseen, who as Corps. Commander Peshawar led his forces again the t insurgency in country’s restive northern regions and FATA. Pakistan’s Ex-High Commissioner to Sri Lanka Seema Baloch, who served in Colombo from 2011 till end 2013, while His Excellency Mahinda Rajapaksa was President, will introduce him and offer insight on Sri Lanka and its struggle for peace.

Later in the evening on June 21, Ex-President, Mahinda Rajapaksa, will be speaking at a Seminar, “Sri Lanka’s Struggle for Peace & its lessons for Pakistan and the Region” jointly organized by Global Village Space (GVS) and Center for Research & Security Studies (CRSS) at Serena Hotel, Islamabad. He will talk about the political and logistical challenges his country faced in its struggle against the insurgency, how Sri Lanka was able to move beyond it, international reactions and what has been done to address those issues. And finally what lessons Pakistan and other countries can learn from Sri Lanka’s struggle for peace. His talk will be followed by a robust Q&A session.

Pakistan, like Sri Lanka, has been plagued with insurgencies over the past decade and can learn much from Sri Lanka’s success in eradicating insurgent elements and the regional and international dimensions. The event will be attended by diplomats, politicians, civil society members, media persons, and policy experts. The session will be chaired by Pakistan’s Ex-Defense Secretary, Gen. Asif Yaseen, who as Corps. Commander Peshawar led his forces again the insurgency in country’s restive northern regions and FATA. Pakistan’s Ex-High Commissioner to Sri Lanka Seema Baloch, who served in Colombo from 2010 till end 2013, will introduce him and offer her remembrances of Sri Lanka. Diplomats, academics and policy experts interested in the discussion can register by emailing to editor@globalvillagespace.com.

Terrorism is a worldwide epidemic that has stunted peace and prosperity in South Asia and the Middle East. Terrorism has to be eliminated by a comprehensive and collaborative effort. The menace has afflicted both Sri Lanka and Pakistan to varying degrees. Both countries have bravely countered terrorism with grit and determination. Rajapaksa’s bold initiative against Tamil Tigers freed Sri Lanka from a three decade long virulent insurgency; but has left accusations of human right violations in its tracks. His reflections on the difficult subject will be useful for theorists, scholars and practitioners alike.

The seminar will be live streamed on websites of GVS and CRSS and their official social media forums and can be viewed there.