SRK and Anushka grace the ramp for a cause! 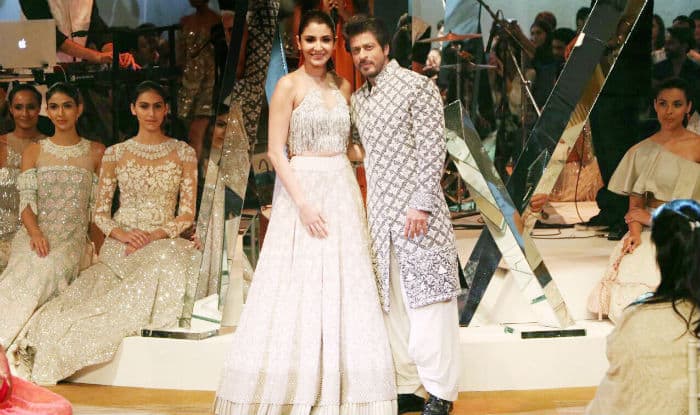 Manish Malhotra and Shabana Azmi, two very popular names of the Indian industry had recently organized a fundraiser event. The “Mijwan Fashion Show 2017” proved to be a start studded success.

There was not just one, but many stars who were present to applaud the efforts of the celebrated designer. The artists who showed up include Kajol, Javed Akhtar, Huma Qureshi, Diana Penty, Sushmita Sen and many more.

Sharukh Khan and Anushka Sharma are reportedly being hitched up for Imtiaz Ali’s next film, The ring.

The couple was seen in complementing outfits while they gracefully walked down the ramp.

Shahrukh Khan was dressed in a black and white ChikanKari sherwani paired with a creme shalwar. Anushka however, stole the show by wearing a fully sequenced ivory lehnga which was neatly carried by an up-do and carefully put on make up.

With the Mijwan group. Such an overwhelming experience for them. Thanku Manish Anushka Shahrukh for bringing us joy pic.twitter.com/7iwDdslmkF
— Azmi Shabana (@AzmiShabana) March 6, 2017

Mijwan, is a Non-profit organization named after a village in Uttar Pradesh. It was founded by Shabana Azmi’s late father, Kaifi Azmi and is being run by the former actress herself along with Namrata, daughter to Naresh Goyal. The organization was initially set up in hopes of reviving employment opportunities for women in villages.

“I’m honored to be part of Mijwan Welfare Society and I was obliged to know that I’m honored with this opportunity to be part of such noble cause. I believe that our society can’t do without women and as a romantic I wholeheartedly respect them. Thus, I’ll say to help these women to get their even rights that they have been deprived off and such art work should be allocated to women as they are master of this kind of work. ” Shahrukh khan commented after the show.

Manish Malhotra, the mastermind behind the outfits worn at the show commented that he was happy to be a part of such a prestigious event. “I feel proud to generate steady work for the craftsmen all through the year. Later, they work on their creations and send these to the designer which are then modified with embellishments and cut work,” he further commented.

The aim of the fundraiser was to create awareness regarding the need of education and the empowerment of girls in particular. It was also requested that people step forward and pay their contributions for the cause collectively.

I tried 9 lipstick hacks to see which ones really work