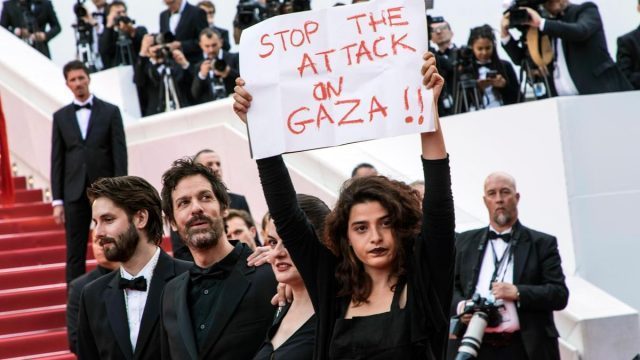 During her first walk at the Cannes Film Festival’s red carpet, the Lebanese actress Manal Issa protested the indiscriminate killings of Palestinians at the Gaza border by Israel. Manal Issa used the platform to redirect the world’s attention towards Israel’s aggression against the Palestinians. She held a placard that said ‘Stop The Attack on Gaza’ on the red carpet. Manan Issa appeared with her team for the premiere of her movie ‘Solo: A Star Wars Story’.

On Monday, Israeli forces fired and opened tear gas, killing sixty Palestinians and injuring thousands in a protest on the Gaza border. The Palestinian authorities called it a massive massacre of the protestors on the day when the United States opened its embassy in Jerusalem.

The protests were also held to mark the Nakba, or ‘catastrophe’ commemorating the 700,000 Palestinians who fled or were expelled from their homes in the 1948 war. According to Gaza’s health ministry, 2400 people were injured in the clash. Among the sixty people, eight were children under the age of 16 and a baby who died after inhaling the tear gas.

The Palestinian authorities called it a massive massacre of the protestors on the day when the United States opened its embassy in Jerusalem.

Hollywood star Benicio Del Toro joined the Palestinians at the Cannes Film Festival in a demonstration against the Israeli killings on the Gaza border. The demonstrators observed a one-minute silence. The dozens of people stood in a circle and held hands outside the Palestinian pavilion. This is the first time the Palestinians have had their own pavilion to promote their movie industry at Cannes.

“It’s really crazy to be here with the films and the filmmakers, talking about our future plans while our kids and families are suffering from the Israeli attack on them,” said Palestinian film producer and director, May Odeh.

Manal Issa’s protest has garnered her criticism on social media as commentators believe that the Palestinians and Hamas were responsible for the clash. They said the Palestinians should stop protesting to save their lives.

Previous articleIn defense of the PML-N Quaid
Next articleAfter no-show in Parliamentary meeting, NAB Chairman asked to appear on May 22

29 July 2021
Previous articleIn defense of the PML-N Quaid
Next articleAfter no-show in Parliamentary meeting, NAB Chairman asked to appear on May 22