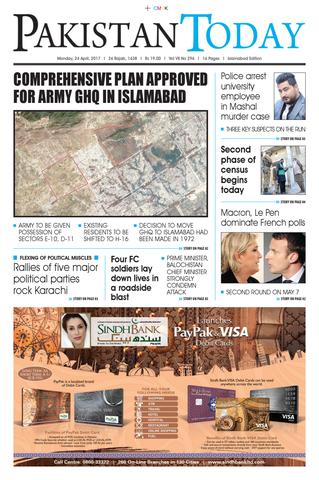 New Delhi and Islamabad are once again at each other’s throat as tensions between the two continue to escalate. India is finding it hard to deal with the resistance movement in Kashmir and is labeling it as Pakistan-engineered. Both countries accuse each other of interferences and interventions. Through a very well-crafted lobbying campaign, India maintains a high moral ground of non-involvement in covert and other sub-conventional means of war. It portrays itself as the victim of such type of war and not the perpetrator.

The incident embroiling Mr. Jadhav at the least helped in espionage for India besides impeding security forces in their counterinsurgency operations.

Pakistan thinks differently due to various reasons and most importantly past events (Fall of Dhaka, 1971). However, certain happenings have compelled many to question about India’s role in subversive activities in Pakistan. Recently Indian politician Subramanian Swamy called for recognizing Balochistan as a separate country, echoing the support offered by Narendra Modi in his Independence Day speech last year. The revelations of Ehsanullah and Kulbushan Jadhav, especially those of the latter makes an assessment of India’s role in Balochistan important.

In March 2016, Indian serving Navy officer Kulbhushan Yadav who had been deputed by India’s premier Intelligence Agency RAW was arrested by Security Forces in Mashkel area of Balochistan. Indian Ministry of External Affairs also confirmed the arrest but denied his affiliation with its foremost intelligence agency.

His confessions revealed that he was the man responsible for providing instruction and weapons to the Baloch insurgents and a fenced in promoting unrest in Karachi. The incident embroiling Mr. Jadhav at the least helped in espionage for India besides impeding security forces in their counterinsurgency operations.

Head of ethnic Baloch group, Balochistan Liberation Front (BLF) Allah Nazar Baloch, said they would not refuse cash or other help from India. This clarifies that India has a major role in this ongoing insurgency in the Southwestern province of Pakistan.

Mr. Jadhav had dubious credentials, his capture from Balochistan (if that really happened) is as yet an unprecedented improvement in light of the fact that the Pakistani security forces don’t recurrently enable outside nationals to go to Balochistan. The option courses are the environs with Iran and Afghanistan. As per the underlying reports, the Indian national sneaked into Balochistan through Iran.

In 2009 former Interior minister Rehman Malik said: “India is involved in the unrest through the Baloch Liberation Army (BLA), which as of now is waging a war against the state of Pakistan.”

Head of ethnic Baloch group, Balochistan Liberation Front (BLF) Allah Nazar Baloch, said they would not refuse cash or other help from India. This clarifies that India has a major role in this ongoing insurgency in the Southwestern province of Pakistan. He further added, “We welcome the statement that Narendra Modi gave to morally support the Baloch nation.”

Read more: Indo-Pak ties: Who will end up on the losing side?

India’s involvement in Balochistan is in-line with its aims of dominating the Arabian Sea. India is apprehensive of China’s growing stakes in the Gawadar port. This is the reason India is against the operationalization of Gawadar port which would have serious strategic implications for it. India is concerned about the domineering control of trade channels which would be hampered if Pakistan would become a conduit to the sea lanes on the Persian Gulf.

While one can’t put a feel on approaching alliances, one affair is far more assertive: any country that is wishing to partake in the Corridor is likely to forge better strategic ties with Pakistan and China.

The Pakistani administration has many a time accused India and Afghanistan of causing trouble and an agitation in Balochistan for decades. Interestingly, now it has as also attributed such activities to Iran, whose Sistan area borders Balochistan. The alone acreage avenue that connects both countries campaign through these regions. Pakistan is not blessed with growing mutual ties with its old rival India and acquaintance Iran.

China-Pakistan Economic Corridor has affronted both USA and India which fears baleful after-effects of the activity in the long run. The USA adulterated and downgraded its ties with Pakistan due to the China-Pakistan Economic Corridor activity which aims to give China ascendency in the arena. The CPEC in actuality kills Asia Pivot Strategy of USA. Besides, it deprives the US of choking China through the Strait of Malacca. Hence Americans are upset with Pakistan, calling for slashing aggressive aid package. Acceleration in abandonment is often considered a way to thwart the growing Islamabad- Beijing camaraderie in this project. Islamabad has again accused India and added CPEC in the reasons of it fomenting trouble in Pakistan.

Russia is not the only country expressing its interest in the Corridor. The United Kingdom, Turkey, and France have been rather vocal about their intentions to be part of the project. The United Kingdom has been more enthusiastic in joining the project. Currently undergoing an alteration abroad from the European Union. After Brexit, the UK needs investments into non-EU projects and China-Pak Corridor could be a lucrative one.

Read more: How RAW uses ‘Terrorism’ as a tool to pose threat to Pakistan’s viability

While one can’t put a feel on approaching alliances, one affair is far more assertive: any country that is wishing to partake in the Corridor is likely to forge better strategic ties with Pakistan and China.

Moscow, for its part, is voracious to advance an actual aerial converse amid its acceptable Indian affiliation and its new rapprochement with Pakistan, which crucially entails not “provoking”  Indian sensitivities, but this has increased India’s tilt towards the US.

One can hence argue that India has a major to play in instigating and propelling anti-Pakistan elements, not only as a deterrence but only to prevent China and Pakistan to thrive in the region and beyond.

Tayyaba Sattar has obtained a Master’s degree in international Relations from the National Defense University (NDU) and is currently working in Center for Strategic and Contemporary Research (CSCR). The views expressed in this article are the author’s own and do not necessarily reflect Global Village Space’s editorial policy.