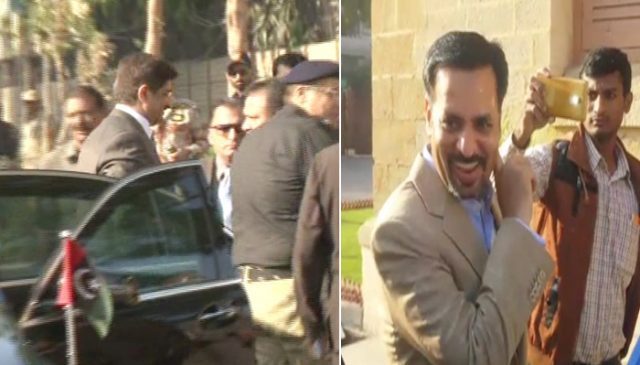 Human waste is being deliberately released in water, observed Chief Justice Saqib Nisar during Wednesday’s hearing of the water pollution case. The remarks of the chief justice came after a short-film about contaminated water was shown in the courtroom.

In July, a report submitted to the Supreme Court stated that 90 percent of drinking water samples collected from Karachi were unfit for human consumption and a significant portion was tainted with human waste. Sindh Chief Minister Murad Ali Shah and former Karachi mayor Mustafa Kamal arrived at the Supreme Court’s Karachi registry to appear before the bench hearing the case.

During the hearing, Chief Justice Nisar observed that the water situation in Sindh is troublesome, adding that the chief minister has been summoned so they can resolve the situation together. The chief justice stressed it was the responsibility of the government to provide clean water to residents.  “If you say, we both can go drink and check the quality of water from any stream in Mithi,” Chief Justice Nisar remarked.

Justice Nisar added: “I wish [PPP leader] Bilawal Bhutto Zardari knew of the [water] situation in Larkana”. He further asked the chief minister to rid Karachi populace of water tankers, adding that it was his (CM Shah’s) responsibility to provide the citizens with clean water.

The chief justice further said they would not interfere in the administrative affairs, however, they would also not allow anyone, be it the chief minister or the prime minister, to act against the constitution. “Even if we have to come to Karachi every week and summon you, we would do that,” he told CM Shah. Justice Faisal Arab also observed that people go to court after witnessing the failure of the government.

Sindh Cheif Minister Murad Ali Shah informed the bench hearing the case that the water crisis is not as extreme as shown by the petitioner, adding that “if I get an opportunity I will show my video to the court”.

Chief Justice Nisar observed that the water situation in Sindh is troublesome, adding that the chief minister has been summoned so they can resolve the situation together.

He was referring to a short video by petitioner Shahab Usto which was shown earlier in court through a projector. The chief minister said that the provincial government is working to resolve the issue; however, it is facing a shortage of funds.

Shah claimed that 100 percent water supplied to Lahore, 73 percent in Sheikhupura and 88 percent in Sargodha contains arsenic, adding that the court proceedings appear to only single-out Sindh. To this, the chief justice responded that even if the video is set aside, the extremity of the situation can be gauged from the commission’s report into the matter.

Read more: Contaminated water: Is the government doing anything about it?

The recent case that has started from Sindh highlights the dangerous water crisis for the people of Pakistan. In August, a report highlighted the threat posed by arsenic in the drinking water. Up to 60 million people in Pakistan are at risk from the deadly chemical arsenic, according to a new analysis of water supplies.

The study looked at data from nearly 1,200 groundwater quality samples from across the country. The resulting risk map shows concentrations well above World Health Organization (WHO) safety guidelines across the Indus plain.

Sindh Cheif Minister Murad Ali Shah informed the bench hearing the case that the water crisis is not as extreme as shown by the petitioner, adding that “if I get an opportunity I will show my video to the court”.

Sindh, particularly, the provincial capital of Karachi is at extreme risk. One of the most severe problems that Karachi residents face is the issue of sewage. The Sewage system lacks citywide coverage. Only 40 percent of people are linked with the sewage system which means 60 percent of the population has to deal with this problem.

People living in “Mohallahas” or at ‘’Katchi abadi” probably face this issue. An approximate 30 cubic meters/second inflow of water from reservoirs, rivers and hub is received by Karachi however the insufficient supply does not meet the requirements of the large population. The supply is merely not insufficient but inequitable and irregular also.

In Pakistan, the threat to daily human life does not come from terrorism or war but from the main means of sustenance of living itself.

Previous articleWhy is Kangana Ranaut refusing to sign the petition to protect Deepika?
Next articleQuratulain Baloch takes another dig at Imran Khan

29 July 2021
Previous articleWhy is Kangana Ranaut refusing to sign the petition to protect Deepika?
Next articleQuratulain Baloch takes another dig at Imran Khan

How does exercise improve old age?