As the timing of Donald Trump's impeachment trial clashes with the Democratic nomination race, some presidential candidates pinned to Washington are deploying relatives, high-flying supporters -- even a dog -- as surrogates for critical 11th-hour campaigning in early-voting states. 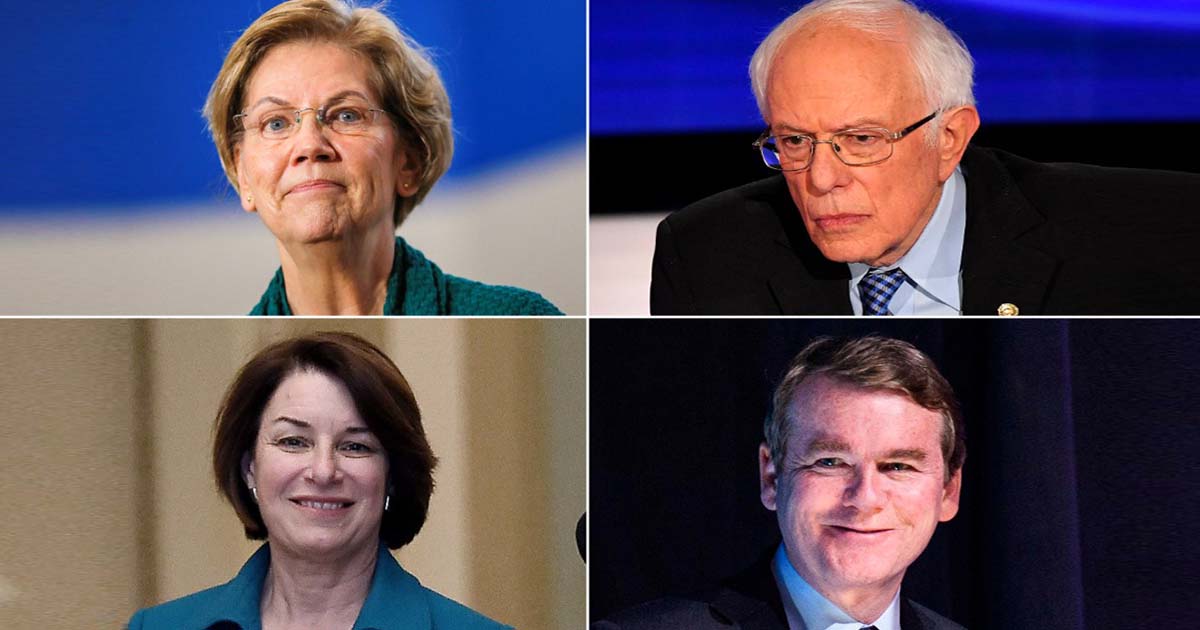 As the timing of Donald Trump’s impeachment trial clashes with the Democratic nomination race, some presidential candidates pinned to Washington are deploying relatives, high-flying supporters — even a dog — as surrogates for critical 11th-hour campaigning in early-voting states.

Of the 100 senators fulfilling their constitutional obligation to sit in judgment of the president, four of them are White House hopefuls.

Remember when I said if you elect me president, you won't have to think about me for two weeks at a time so you can raise your kids and live your lives?

We can’t afford four more years of sleepless nights because of Trump.

The trial — where senators are barred from speaking or using electronics during hours of oral arguments — is forcing the quartet to concoct innovative campaign solutions ahead of Iowa’s February 3 vote, the first in the nomination process.

Sanders has confirmed he is chartering a private plane to jet to and from Iowa for face time with voters, likely during Sunday breaks in the trial.

“I’m not going to be able to be here as much as I would like,” Sanders told supporters Monday at an Iowa museum. “So you guys are going to have to carry the ball.”

Klobuchar was to host a statewide “tele-townhall” with Iowans just half an hour after the trial’s Wednesday session wraps up, likely at 9:00 pm (0100 GMT Thursday).

Unable to be in two places at once, the candidates have dispatched their spouses or children to early voting states.

Klobuchar’s husband John Bessler and their twenty-something daughter Abigail will host “Hotdish House Parties” — dishes like casseroles that are Midwestern staples — as they campaign across Iowa this week, Klobuchar’s campaign said.

“As we speak, my daughter is out there,” Klobuchar told CNN Wednesday during a break in the impeachment trial.

“The way politics work, you’ve got to have people that are out there for you, or you don’t have a campaign.”

Abigail meanwhile has also taken over her mother’s Twitter account while Klobuchar is grounded in the trial.

Warren’s husband Bruce Mann, a Harvard professor, campaigned for her in Iowa last week and will attend canvasing events in her stead Saturday and Sunday in New Hampshire, which votes second in the process, on February 11.

On Saturday, Jane Sanders campaigns for husband Bernie in Nevada, the western state that votes one month from Wednesday.

Jennifer Rosenbaum, who headed Barack Obama’s surrogate operation during his 2012 presidential re-election, said it is “unfortunate” that the four senators cannot campaign during such an inflection point for the country.

But she does not believe their campaigns will suffer due to their trial commitment.

“They’re in Washington, so who’s actually covering for them? I think it’s a fabulous story for all four,” she told AFP.

Voters long to see the human nature of candidates, “and they’re glad to see that there are family members out stumping,” she added. “And don’t forget about the four-legged creatures.”

There is no official word whether Warren’s husband will be accompanied in New Hampshire by Bailey, their golden retriever who has become an unofficial mascot — a “furrogate,” perhaps — and has campaigned with Warren before.

Bernie Sanders’s rally Wednesday at the University of Northern Iowa was canceled “due to the impeachment schedule” in Washington.

But popular liberal congresswoman Alexandria Ocasio-Cortez, who has endorsed Sanders and can draw substantial crowds herself, is set to campaign for him Friday and Saturday in Iowa.

I'll be on @Maddow shortly to discuss the impeachment trial and how I'm fighting to root out corruption in Washington.

Warren, too, has heavy hitters campaigning for her, including Julian Castro — who endorsed Warren shortly after dropping out of the race this month — and several lawmakers.

While relatives stand in for their loved ones as candidates trade the frigid Iowa cornfields for the Senate floor’s more temperate climate, frontrunner Joe Biden and fellow moderate Democrat Pete Buttigieg are barnstorming Iowa unencumbered.

But Biden and Buttigieg may not have a massive advantage over their rivals, argued Rosenbaum.

“Really good surrogates can act as great messengers for a candidate, especially leading into a primary,” she said.

Trump: America should apologize to Kavanaugh