Syria: A vicious cycle of interventions 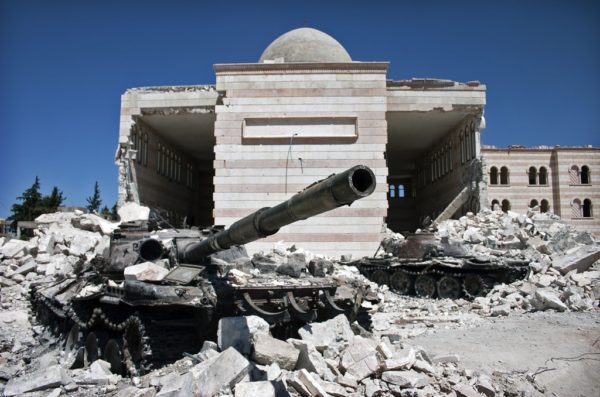 President Trump’s decision to pull U.S. troops out of Syria lasted, I think, a day, maybe two. His quick reversal came after deep-state officials told him that exiting Syria was just not going to happen, at least not any time soon. Trump’s reversal has now been refortified after the Syrian government supposedly launched a chemical weapons attack on Syrian rebels. Far from exiting Syria, Trump is now indicating that he’s all in, even contemplating a military attack against the Syrian regime.

The Constitution called into existence a limited-government republic. That was the type of government under which Americans lived for more than a century. It entailed a federal government with relatively weak powers. No income tax, Social Security, Medicare, welfare, Pentagon, CIA, NSA, EPA, DEA, SEC, drug war, immigration controls, torture, assassination, or indefinite detention. It had a relatively small army.

Continuing to intervene to fix the problems of prior interventionism will only lengthen and exacerbate the death and destruction over there and the loss of liberty, privacy, and prosperity here at home.

How was this transformation accomplished without a constitutional amendment? U.S. officials, led by President Truman, told the American people that they now faced a bigger, scarier official enemy than they had faced in World War II. This new official enemy was the Soviet Union, which, ironically, had been America’s partner and ally during the war. Having been advised to “scare hell out of the American people,” Truman told Americans that the Soviet Union was leading a worldwide communist conspiracy to take over the United States and the rest of the world.

It was that overarching fear of the Soviet Union (whose principal member was Russia) and communism that undergirded the Cold War and that enabled the Pentagon, the CIA, and the NSA to garner ever-increasing power, influence, and money for some 45 years. It was also that fear that led to U.S. interventionism in Korea and Vietnam and elsewhere and to the establishment of a worldwide empire of military bases.

Hardly anyone questioned or challenged any of this. Among the few people who did was President John F. Kennedy, who, after the Cuban Missile Crisis, announced that he was putting an end to the Cold War and the U.S. national-security establishment’s hostile relationship toward the Soviet Union and the rest of the communist world. That came to a quick end after he was assassinated.

In 1989, it all came to an end with the dismantling of the Soviet Union, the unification of Germany, and the withdrawal of Soviet troops from Eastern Europe. The decision by the Soviet Union to unilaterally end the Cold War (without any negotiations or treaty) meant something else: that the post-WWII justification for the conversion of the U.S. government to a national-security state had come to an end.

President Trump is vowing to initiate an act of war directly against Syria, which is illegal under our form of constitutional government given that there is no congressional declaration of war against Syria, as the Constitution requires.

The Pentagon, the CIA, and the NSA were not about to permit the restoration of a limited-government republic to the United States. They had worked too hard to gain control over the federal government and, to a large extent, over the entire American society as well as other parts of the world. That’s when they decided to operate on a twin track: To initiate interventionism in the Middle East knowing that terrorist blowback was virtually certain to occur and to continue trying to incite Russia into resuming the Cold War.

Soon after the end of the Cold War, the U.S. government went to war against another partner and ally, Saddam Hussein, which succeeded in killing tens of thousands of Iraqis. That was followed by 11 years of one of the most brutal sanctions systems in history, which killed hundreds of thousands of Iraqi children, many of whom came from Muslim families. The mindset of official indifference to the deaths of those children was captured by U.S. Ambassador Madeleine Albright, who told “Sixty Minutes” that the deaths of half-a-million Iraqi children were “worth it.” By “it” she was referring to regime change, which was a core activity of the U.S. national-security state.

Read more: Is US destroying itself through foreign interventions?

At the same time, U.S. officials double-crossed the Russians by breaking their vow to not expand NATO. Instead, they began absorbing former members of the Warsaw Pact into NATO, with the aim of ultimately acquiring Ukraine, which would have enabled U.S. officials to take over the Soviet military base in Crimea and install U.S. bases and missiles on Russia’s border. When Russia responded to U.S. plans by preemptively invading Crimea, it was clear that the strategy of renewing a hostile relationship with Russia was succeeding.

Like clockwork, Islamic extremists began retaliating for post-Cold War U.S. interventionism in Iraq and the Middle East (including the killing of the Iraqi children, the stationing of U.S. troops near Islamic holy lands, and the unconditional support for the Israeli government). That’s what the 1993 terrorist attacks on the World Trade Center, the terrorist attack on the USS Cole, and the terrorist attacks on U.S. embassies in East Africa were all about.

Then came the 9/11 attacks, which were simply more of the same — blow back from U.S. interventionism in the Middle East. U.S. officials, needless to say, maintained that anti-American terrorism had nothing to do with U.S. interventionism abroad but instead was motivated by hatred for America’s “freedom and values.”

The decision by the Soviet Union to unilaterally end the Cold War  meant something else: that the post-WWII justification for the conversion of the U.S. government to a national-security state had come to an end.

By this time, it was clear that the sanctions on Iraq had failed to achieve regime change, notwithstanding the deaths of hundreds of thousands of children. That’s when U.S. officials decided to use an invasion of Iraq to achieve what their sanctions had failed to achieve. They used the 9/11 attacks and the fear of WMDs and mushroom clouds as a bogus excuse for a regime-change operation involving a full-scale invasion against a country whose government had never attacked the United States or even threatened to do so.

Read more: How similar are the US and the former British Empire?

The invasion and occupation of Iraq, as everyone knows, killed or injured millions of people, not one of whom had ever attacked the United States. It also succeeded in destroying the entire country, including homes, businesses, and infrastructure. Through it all, U.S. officials consistently maintained that they were bringing “freedom” to Iraq.

What they brought instead was conflict, chaos, civil war, and ISIS, a group that largely consisted of Iraqis who opposed the U.S. invasion and occupation of Iraq and that was determined to evict U.S. forces from the region and oust the U.S.-installed regime in Iraq. As everyone knows, ISIS, which was quickly made another official enemy of the United States, provided the Pentagon and the CIA with the excuse for more interventionism in the Middle East, including intervening in Syria.

The Syrian intervention is interesting because it involves, once again, a regime-change operation against a former partner and ally of the U.S. deep state. How do we know this? Because someone from the CIA struck a deal with the deep state in Syria to accept delivery from the CIA of Canadian citizen Mahar Arar and torture him for a year on behalf of the CIA. We still are not permitted to know the details how that deal came to be arrived at, but it does show that Russia isn’t the only nation that has had a close relationship with the Syrian dictatorship.

Meanwhile, the U.S. government was encouraging Syria citizens to revolt against their dictatorship in the hopes of achieving regime change, knowing full well that this would entail the deaths of countless people and the destruction of the country, just like with Iraq. Like with the Iraqi children, the deaths of Syrians were considered “worth it” — i.e., worth the attempt to achieve regime change in Syria. Meanwhile, U.S. officials and their followers in the mainstream press continue pretending that U.S. forces are intervening in Syria to fight ISIS (which their invasion of Iraq produced) when, in actuality, it’s all about regime-change against Syria.

And now President Trump is vowing to initiate an act of war directly against Syria, which is illegal under our form of constitutional government given that there is no congressional declaration of war against Syria, as the Constitution requires. Did I mention Libya, another Middle East U.S. regime-change operation that has left nothing but death, destruction, and chaos in its wake?

Did I mention the massive refugee crisis in Europe that resulted from the death and destruction wrought by U.S. interventionism in the Middle East? Meanwhile, the U.S. mainstream press feeds into all this chaos and mayhem and encourages it by claiming that U.S. interventionism must continue to fix the consequences of the previous interventions. That policy can best be described as “perpetual war for perpetual peace.”

The only way to stop U.S. interventionism and all its death, destruction, and mayhem is to stop it. Just bring the troops and the CIA agents home now. Continuing to intervene to fix the problems of prior interventionism will only lengthen and exacerbate the death and destruction over there and the loss of liberty, privacy, and prosperity here at home.