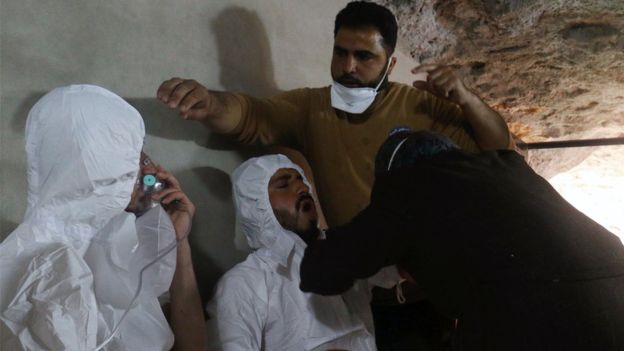 An alleged chemical attack in Syria’s rebel-held Douma has sparked international outrage, with Washington warning Sunday of possible military action, while Damascus and Moscow said the reports were mere “fabrications”.

Syria’s White Helmets, who act as first responders in rebel-held areas of Syria, said the attack took place late on Saturday using “poisonous chlorine gas”. “More than 500 cases — the majority of whom are women and children — were brought to local medical centers with symptoms indicative of exposure to a chemical agent,” according to a joint statement issued by the Syrian American Medical Society (SAMS) and the White Helmets.

Footage posted online by the White Helmets, which was not possible to verify, showed victims with yellowed skin crumpled on the ground and foaming at the mouth. Douma is the last remaining opposition-held town in Eastern Ghouta, once the rebels’ main bastion outside Damascus but now ravaged by a seven-week regime assault. Since February 18, Syrian and Russian forces have waged a fierce military onslaught.

Read more: ISIS being pushed back in Syria: Is the end of the…

Who was behind it?

While no one has yet provided evidence of its involvement, Syrian President Bashar al-Assad’s regime has been repeatedly accused of using chemical weapons in the country’s seven-year civil war.

The Syrian Observatory for Human Rights, a Britain-based monitor, said the regime carried out a wave of air strikes on Douma on Friday and Saturday that killed nearly 100 people, including many who suffered breathing difficulties.

Syria and its Russian ally denounced the claims as “fabrications”, with Russia warning of potential “dire consequences” if they were used as a pretext for military action.

How has the world reacted?

US President Donald Trump warned there would be a “big price to pay”. “Many dead, including women and children, in mindless CHEMICAL attack in Syria,” Trump wrote on Twitter. “President (Vladimir) Putin, Russia and Iran are responsible for backing Animal Assad. Big price to pay.”

The EU said signs suggested the Syrian regime carried out the Douma attack and urged Russia and Iran to help prevent another one. “The evidence points towards yet another chemical attack by the regime,” the European Union’s diplomatic arm said, calling for “an immediate response” from the international community.

United Nations chief Antonio Guterres said he was “particularly alarmed” by the reports, adding that if confirmed, the use of chemical weapons would be “abhorrent”. Britain called for an investigation into what it said were the “deeply disturbing” reports, and Turkey, which has backed rebels against Assad, said it had a “strong suspicion” the Syrian president was to blame.

France has repeatedly said that evidence of chemical weapons use in Syria could prompt military action and said Sunday it would “do its duty” following the latest allegations. It called for an emergency UN Security Council meeting. Pope Francis described the allegations as “terrible news”, saying: “Nothing, nothing can justify the use of such devices of extermination against defenceless people and populations.”

Will military action be taken?

White House security adviser Tom Bossert refused to rule out US military action in response to the alleged chemical strike. “I wouldn’t take anything off the table,” he said. US State Department spokeswoman Heather Nauert said the reports, if confirmed, “are horrifying and demand an immediate response by the international community.”

Prominent Republican senator Lindsey Graham warned Trump that a failure to act now could leave him in a weakened posture internationally. “It’s a defining moment in his presidency,” Graham said.

What other major chemical attacks?

A chemical attack with the nerve agent sarin in the Eastern Ghouta enclave in August 2013 killed 1,429 people, including children, the US says. Sarin was also detected in an April 2017 attack on the northwestern town of Khan Sheikhun that killed more than 80 people. The agent was released after an air strike.

Helicopter-dropped chlorine-filled munitions have been increasingly used by the regime as the conflict has dragged on, according to a 2017 report by Human Rights Watch.

22 September 2021
Previous articleTrump to host UAE Crown Prince, calls for Gulf unity
Next articleTrump to decide soon whether to retaliate for chemical attacks in Syria